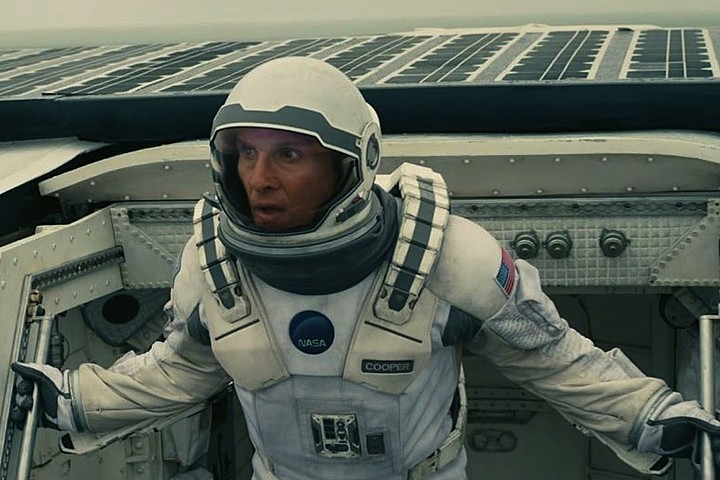 Interstellar is definitely one of Christopher Nolan's best works. I was understandably skeptical at first, mainly because I was curious as to how Nolan would top the Dark Knight series, but Interstellar was absolutely fantastic. When I watched this film in theaters, I appreciated how the film is rooted not only in science, but raw human emotion. But once I saw the watched the BluRay and the extra features, I got to see how involved Chris Nolan was throughout the whole process of the movie. It made me appreciate the work that he went through to make sure his vision for many aspects of this film came to fruition. Hands down this is one of the best movies I have seen within the past year. 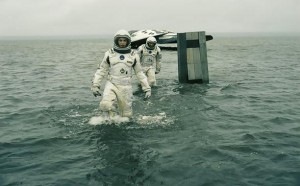 As stated before this film is visually stunning. What sets it apart from other space films is the way Nolan visualizes and depicts certain space phenomenon. I was very impressed with this film's illustration of a black hole. Everything about the black hole and wormhole felt very unique yet grounded in reality and science. Beyond the visuals, the way Nolan handled space exploration as a whole was refreshing. Many times when a movie depicts a new world, its just looks like another remote location on earth with a jungle or forest. Nolan’s depictions of other planets gave the harsh reality that not every planet that is livable will fit the typical definition of “livable”. 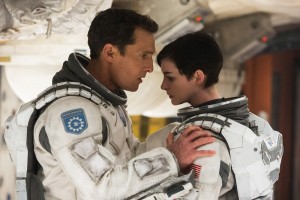 There are some masterful performances put on by the cast to match the visuals. Matthew McConaughey does a great job with his performance in the film as Cooper. McConaughey really draws you into the character of Cooper and forces you to empathize with his dilemma as he leave his kids behind. I also appreciated that Cooper was the symbol for the hope of humanity.  Although he wanted to provide a better way of life for his kids, he thought about the bigger picture throughout the entire movie. His mission was about making sure everyone on Earth got the chance to live and the future of the human race. A was presently surprised by Anne Hathaway’s performance as Dr. Brand. Normally, Anne Hathaway annoys me as an actress because of her demeanor and deliverance of line, but she surprised me with this role. One thing that sets this film apart from many others was the castings of Cooper's daughter Murph through different ages of her life. It felt as though you watched her grow throughout the whole movie without physically being there to witness it; ironically similar to how Cooper felt. 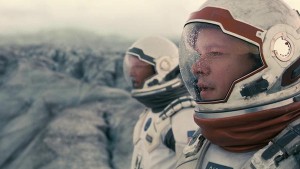 A key component to what makes this movie great to me is the soundtrack. This might be one of the best scores I have heard in a film. The way it mixed throughout the film was very well done, and I felt the music helped harmonize the emotion that the characters felt throughout the movie. Hans Zimmer has a niche for composing music that gets the audience to feel and get wrapped in the journey that the astronauts embark on. It almost feels as if the music is an additional character used to supplement the plight of the many decisions made by Cooper, his family, and the other astronauts.

Overall this is a great movie and well worth picking up on BluRay.  Particularly because the BluRay is packed with almost THREE hours worth of extras. That makes the price of this BluRay well worth it.

Special Features
Included with the BluRay/DVD combo is a collectible 70 mm Imax film cell of a scene from the movie.

The Science of Interstellar: Explaining how actual science formulas and theorems are used as part of the vital points of the film. The Nolan brothers were influenced by the studies of Astrophysicist Kip Thorne who also served as an executive producer. Many of Albert Einsteins theories and equations factor into the science of film. The crew also discusses many phenomenon that exist in space such as planet discovery, appearance of black holes, and the idea of a wormhole existing. Also, the various dialogues present brings up the scenario faced in the movie, what is next for society as Earth cannot sustain life forever.
Inside Interstellar: A detailed look at plotting the Interstellar journey and making sure the science used in the film was as accurate as possible. Included is the role of imagery and how important and powerful it serves  for the various characters throughout the film in multiple sequences.
Life On Cooper's Farm: The farm scenes were set and filmed in Alberta, Canada due to having an ideal landscape for the visual effects. The meaning of what Cooper's farm symbolizes as some of the more important scenes were shot there. Many aspects of the beginning are explained from the chase scene with the drone, the unnatural appearance of corn and crops on the set, and how the fire was created and maintained when the scenes of burning crops was shot.
The Dust: Chris Nolan and the special effects team explain how they used machines and small pieces used as food filler to create the dust storms. The special effects crew shot many scenes via camera rather than CGI to give it more of an authentic visual feel and effect to the environment.
TARS And CASE: Included is a look at the description and the design of both articulate machines. Bill Irwin, voice of TARS, and another puppeteer were actually behind the TARS model moving and interacting with the other characters. Also, included are how the special effects crew created various rigs so simulate movement on the different planets for TARS and CASE.
The Cosmic Sounds of Interstellar: In this feature, the music of the movie conducted by Hans Zimmer and the role it plays throughout the film. You discover that the organ is the primary instrument used during the movie with an orchestral accompaniment. The music is coordinated in ways so that it helps you capture the raw emotion in the film.
Space Suits: The suits hat all of the astronauts wore were made to have a NASA aesthetic feel to them. All of the items that were attached to the suit were functional and served a purpose. A microphone was placed in the helmet so that t was easier for the actors to communicate for dialogue scenes.
The Endurance: The design and creation of the spaceship used by the astronauts to get to the wormhole. The spaceship contained 12 pods with each specific pod serving a function. In order to get the rotating effect, the special effects crew built and used a hydraulic rocker. Also included in this feature is a description and tour of the inside of The Endurance.
Filming in Iceland: The explanation of why Iceland why chosen as the location to film scenes in Miller's Planet as well as Mann's Planet. The crew ended up working on one of the largest Glaciers in Europe. While filming, the crew had to battle the elements such as the harsh winds and even avalanches.
The Ranger and The Lander: An inside look at the detail and description of the two spacecrafts. Also, a summary of the significance of why each ship was needed for the mission. Chris Nolan actually controlled the motion base used to move the ships.
Miniatures in Space: This feature shows how the crew used miniature models to get the shots for the space sequences. Also, they used motion control photography to capture the models in various scenes.
Simulation of Zero-G: Summarizes the different ways the cast and crew were able to  manipulate the set to give off the illusion of having zero gravity. Many scenes were shot vertically to give off that very illusion. The actors were attached to a special effects rig to get many of the close shots that were shot in close quarters.
Celestial Landmarks: Details the use of executive producer Kip Thorne's scientific theories that are present in the movie. Also into the science used to support the existence of black holes and how a wormhole would work if one existed.
Across All Dimensions and Times: Details the shooting of the Tesseract scene, which happened to be one of the most difficult sequences of the film. The crew built an infinity box to visualize the tesseract. Digital imaging was used to capture the different moments in time for each room represented. The tesseract sequence was heavily rooted through the emotional connection between Cooper and Murph.
Final Thoughts: This final feature delves into the reasoning behind the concept of Interstellar. Also, how the role of humanity was developed to fit into how the story would be told. Hopefully, this movie will help to further the discussions of space travel and exploration.