In Fabric Review: Marianne Jean-Baptiste Takes the Lead in this Black Friday Thriller 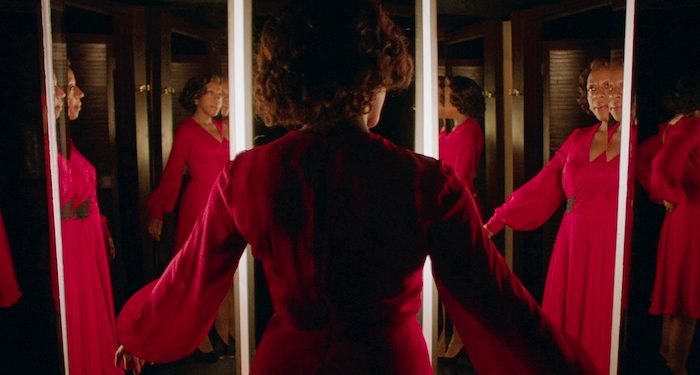 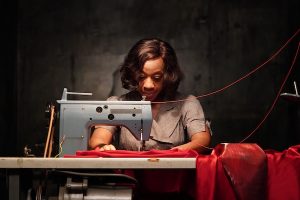 photo courtesy of A24

It’s fitting that In Fabric drops the week after Black Friday, given that this A24 thriller begins with the purchase of a red dress at the sales. This surreal, creepy drama from Peter Strickland (The Duke of Burgundy) features Marianne Jean-Baptiste as a divorced, bank teller named Sheila. The film is set in the 1980s and Sheila, who is looking for love via personal ads and datelines, finds herself in need of a new dress for a date. A sale at the local department store is literally too good to be true when the dress she purchases, brings nothing but horror with it.

In addition to her struggle to find love, Sheila is dealing with an ungrateful adult son (Jaygann Ayeh) and his semi-live in girlfriend, Gwen, played masterfully by Gwendoline Christie (Game of Thrones, Star Wars). Christie’s performance will delight her fans. The banter between Christie's sullen, sly-talking Gwen and Jean-Baptiste as the quintessential, Black mom, is worth the price of admission alone.

As the force of the dress overtakes Sheila’s life, each success is met with an obstacle; every victory is followed by a failure. Marianne Jean-Baptiste grounds the film’s supernatural elements and you'll find yourself rooting for Sheila to pull herself out of the grasp of this cursed clothing item. 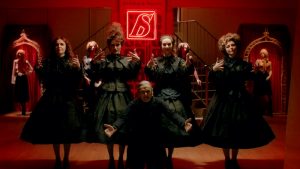 photo courtesy of A24

In Fabric walks a tightrope between fever dream and psychological thriller. By the end of the two hours, you, like Sheila, will wonder what’s real and what you’ve made up in your mind. Strickland uses visuals whose repetition call to mind the subliminal advertising of the eighties. The score also ratchets up the tension underpinning the creepy nature of the characters Strickland has created. Whenever we enter the department store, the shopgirls, who call to mind Victorian dolls, respond to customers with vague, esoteric soliloquies that are both frustrating and comedic. Strickland wisely uses humor to ease the tension of the film injecting genuine laugh out loud moments into the script along with wacky ancillary characters who add this weird world that feels recognizable but slightly off-kilter.

Overall, In Fabric is a film that you will be mulling over for days or even weeks after you see it. And it might inspire you to finish your holiday shopping online.

In Fabric is in theaters December 6th.