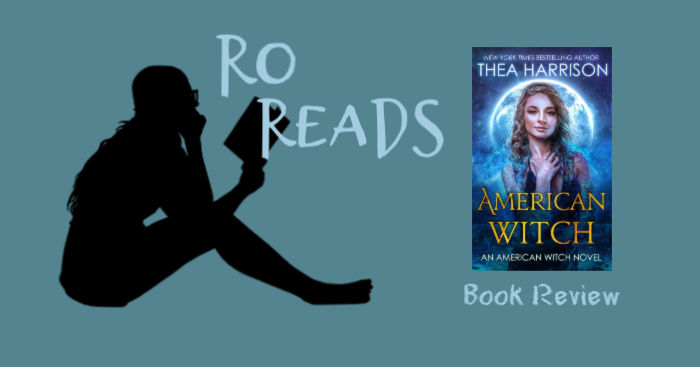 Readability 9.5
World Building 8
Story Arc8
Character Development 8
Magic System 9
Plot Progression/Pacy 8.5
Thea Harrison returns to the world of the Elder Races in the US with American Witch; a new spin-off that focuses on witches and the twitchy witchy things they get up to. It wasn’t at all what I expected when it came to story direction, and I couldn’t be happier about that. This book is a stand-alone, but it does a great job of setting a solid foundation for the stories to follow. The story conflict makes for goo character growth; even though watching this pair find their romantic footing occasionally slows the pace it's absolutely worth the side trip.
8.5

So, I've been living in romacelandia lately and the end of April offered up a few titles that push their way to the top of my reading list. It should be pretty clear by now that I read in every genre and have at least one author I one-click into my ebook library. When it comes to quick paranormal romance reads, Thea Harrison is that author. Harrison writes urban fantasy and paranormal romance books that are a fresh take on magic and mystical beings.

It's always difficult to find a good jump-in point with authors who world-build through one main story arc then spin off character-driven storylines at will. But if you're looking for a little bit of action, sex, and spell casting to take you into the weekend, then you should read American Witch. Just be prepared to want more and end up binge-reading Harrison's previous Elder Races titles. 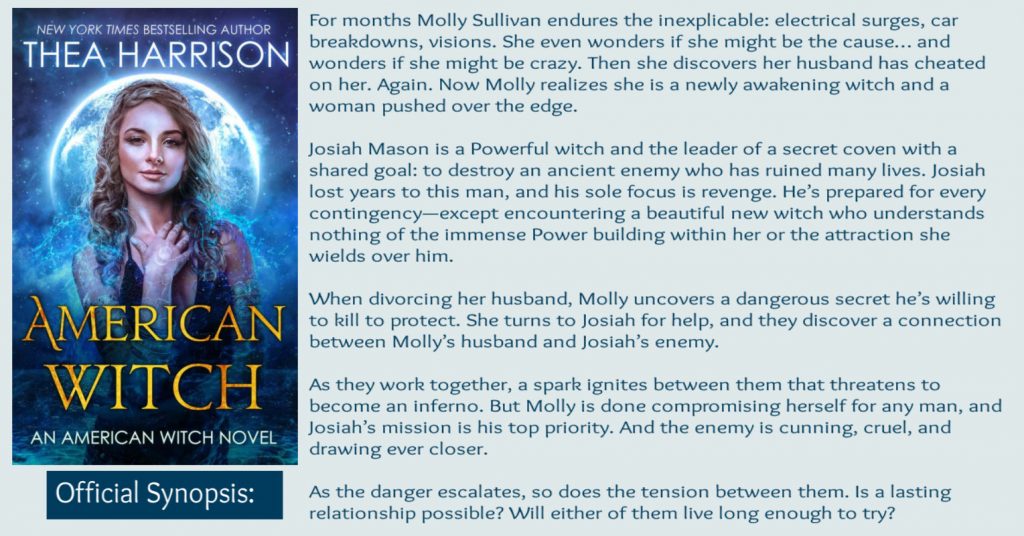 American Witch is the start of a promising new trilogy and as far as origin stories go it’s a pretty great one. Using her trademark dry wit and quick-fire pacing, Harrison kicks off things with a woman at a crossroads who gets caught up in a revenge-fueled battle just as her personal life goes completely off the rails.

There's Never A Good Time To Find Out You're A Witch...

Molly Sullivan is a perfect wife and hostess suddenly plagued by inexplicable electrical surges that short out the power in her home and car and who's seeing things that aren’t really there. Molly thinks she may just be losing her mind. And to make matters worse, Molly discovers her husband’s cheating on her right before a large number of his friends, associates, and Atlanta's powerbrokers are set to arrive at her home for a party.

The opening scenes are engaging and dynamic enough to reel you in immediately. Very shortly into the story arc, it’s obvious that Molly is a woman to be reckoned with and that’s before you realized that all those strange occurrences happening around her are signs of an awakening power that will shift the trajectory of her life even more than the fast-approaching end of her marriage.

I mean, it's hard not to get invested in a story when your introduction to a character includes her walking into a party and dropping a pair of purple panties (that are not hers) into her husband's drink while he's standing talking to his boss.

Harrison has flair and it’s on full display from page one. The dialogue is vibrant, the descriptions vivid, and the pace fitting for the story development.

I freely admit to being biased in favor of how Harrison creates a heroine. Molly’s strengths and weaknesses are compelling, relatable, and make for a charismatic character. You’ll root for her even as you get frustrated when it seems like she’s deliberately missing what’s happening around her. But this is a refreshingly well thought out woman and a damn interesting witch-in-the-making.

Now, this wouldn’t be the world of the Elder Races, if there wasn’t a conflict, danger, and sinister mystery afoot…

Molly’s emergence as a witch happens at exactly the worst time for Josiah Mason, Atlanta’s new DA - and uber powerful witch just arrived into town intent on hunting down a century’s old enemy and on establishing himself as THE Power on the eastern seaboard. Josaiah tries to move swiftly to neutralize the potential threat that is Molly but instead finds himself drawn to her sharp wit, intelligence, and her stunning face and personality. Against his better judgment, Josiah steps in when Molly has nowhere else to turn and soon finds himself questioning his commitment to vengeance. Harrison has a way of building a male antagonist unafraid of a strong woman and vulnerable enough to admit when he’s been a jackass. Josiah is brooding, badass, and definitely worth taking a risk on…even if he doesn’t think so.

There are few writers, in my opinion, that takes the “enemies-into-lovers” trope and do something worth the read. I know bold words, but I’m rarely interested in the "I hated you before I loved" you schtick. But Josiah is an intriguing character with a backstory that deepens the paranormal elements in this world and expands the plot in ways that will lure readers further into the mix. His motivations are noble even if they’ve driven him to a place where he’s the least likely to make a good partner. Harrison has a deft hand at building complicated relationships that take elements of this trope and show them for what they really are. The romantic elements of this story are a great example of how to build a relationship between two strong-willed people who have chemistry between them but every reason (but not the sock and trade reasons) to not act on it.

For newcomers to the world of the Elder Races as well as long-standing readers, this world is a unique contemporary take on the United States where magic exists in the mainstream. Harrison has a way of blending the fictional, fantastical, and factual to create opportunities for stories with amazing synergy, a sense of history (because damn doesn't she know how to pull together a villain backstory), and movement that’s steamy, action-packed, and a worthy journey to a happily-ever-after. Even without a cliff-hanger, I’m once again all-in to see what’s next.

FTC Notice: I'm a member of the Harrison Read-Review Team. This means I get access to ARCs in exchange for an honest review. I can't be bought (not even with books) so my opinion is always my own because no one is the boss of me, except my mama.

Thea Harrison writes paranormal romance and urban fantasy. Harrison is a New York Times and USA TODAY bestselling author who lives and works in Colorado. Her popular series the Elder Races series began May 2011, and she's currently at work on various new projects in sci-fi fantasy, paranormal and contemporary romance.