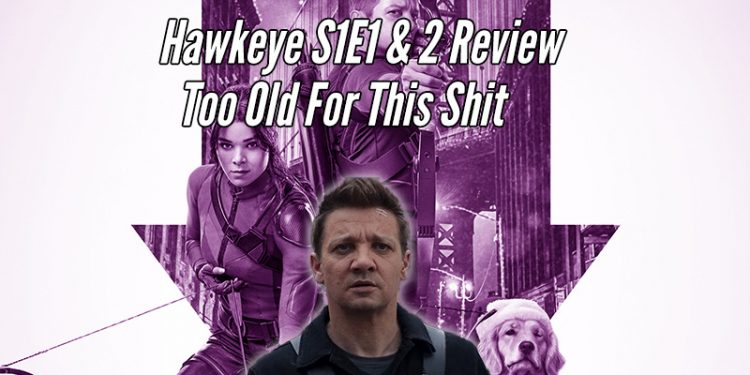 We’re back with another Marvel Disney+ show. This time Hawkeye takes center stage. The first two episodes dropped on the day before Thanksgiving. So far there are several things we like about this series. First, its good to get some in-depth focus on Clint. While Black Widow only recently got a solo movie, that character got a lot of screen time in other movies. Hawkeye has always been a bit of a mystery. Even with the Blip, we know he became Ronan and went to a really dark place but we never really got a lot of details on that. Looks like this series we may be getting more of that. Not only that but we see Clint dealing with basically PTSD from his time working as an Avenger. He’s losing his hearing, clearly is still messed up from Nat’s death and just wants too spend some time with his family for Christmas. Clint gives off big Murtaugh from Lethal Weapon vibes this whole time.

Then there’s Kate Bishop. She idolizes Hawkeye (The show does a great job showing a flashback from 2012 and the Battle of New York). She’s also dealing with her mother and her shady boyfriend who is CLEARLY Swordsman. Kate clearly has the skills but is also not really ready for the amount of shit she’s gotten herself and Clint into. It’s going to be fun watching both of them being forced to work together.

So far the show feels pretty straight forward but we know we’re going to get a twist. What was the big deal with the watch the thieves were trying to steal? Is Kate’s mom just as shady as her boyfriend/fiancé? What’s the deal with Echo leading the Tracksuit Mafia? Lot of questions to ask and we can wait to see what they have coming for us.