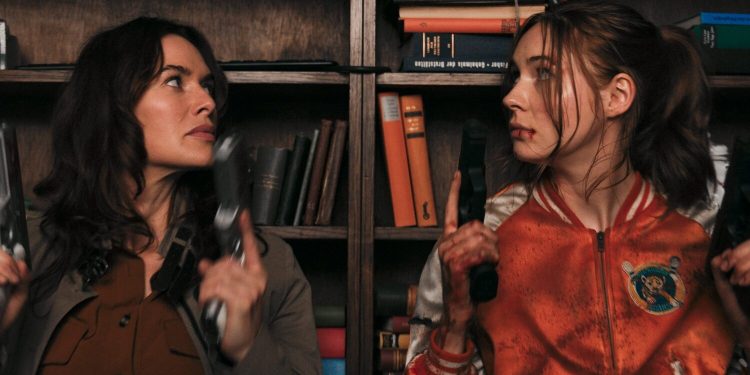 Gunpowder Milkshake is one of those films that has all the elements to be really good but fails to live up to the potential and the cast. It’s one of the cardinal sins of a film with a great cast and an interesting concept. Seriously, with a cast of women like Karen Gillan, Lena Headey, Carla Gugino, Angela Bassett and Michelle Yeoh, Gunpowder Milkshake didn’t have to try hard to get our attention. The mistake comes from where the attention is put in this film and not leaning on why the audiences were interested in the first place.

You would think that this film would focus mostly on ‘The Librarians’, the secret sisterhood of assassins. However this film oddly enough doesn’t give us enough of them. This film should have been treated as an ensemble film but instead it focused mostly on Gillan’s Sam and only gives us pieces of the lore behind The Librarians. It’s a puzzling choice. Especially since when the film focuses on the women of the movie, it works very well. The chemistry between the cast is great. Chloe Coleman as the young Emily is also a great addition and works really well with everyone. It tis a little disappointing that we didn’t get enough of Paul Giamatti being over-the-top Giamatti but what we do get works.

One thing I can’t help but feel is that this film would have been better in the hands of a female director and writer. Yes, men can and should be able to write and direct female-centered films well. But in many cases, there’s a clear lack of understanding the assignment. Gunpowder Milkshake falls into that category. It feels like the veterans Basset, Yeoh, Headey and Gugino were able to salvage this film from being a complete disaster just based off of their own talent and not because of what they were given with the script. There’s a lot of forced “Girl Power” moments that feel as if they were clearly written by a man (and they were) and don’t do this cast justice.

This film is entertaining enough and apparently there’s a sequel being developed. I hope that the lessons learned from this first outing are taken to heart and I really hope they hand the reigns over to a woman to do it justice.