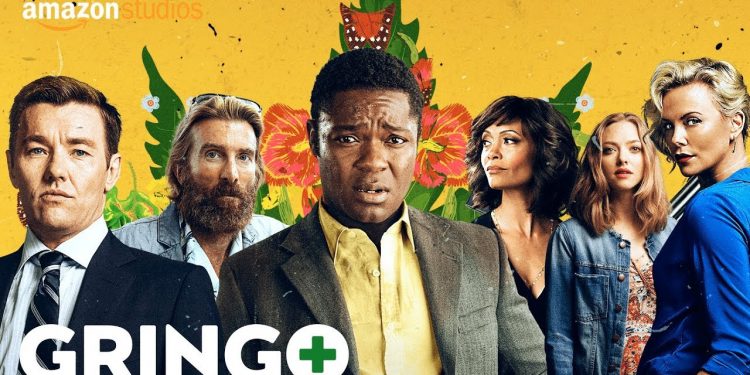 Gringo stars David Oyelowo as Harry Soyinka, a "carrot eating", embarrassingly gullible, mild-mannered employee at a company called Cannabax Technologies run by Richard Rusk (Joel Edgerton) that has developed the first weed pill where Harry is its Global Pill Heel.  Struggling to stay cash poor due to his wife (Thandie Newton) drowning him in debt, Harry gets wind of a merger that could potentially leave him jobless and decides to take matters into his own hands during a trip to Mexico with Rusk and Elaine Markinson (Charlize Theron), a couple of office-fuckers in every sense of the term.  Harry fakes a kidnapping that turns into a real kidnapping which turns into a mercenary kidnapping then back into a real kidnapping, guns show up, bodies drop, and the movie ends on a beach like Shawshank Redemption.  There's more but it's really less, so why even. 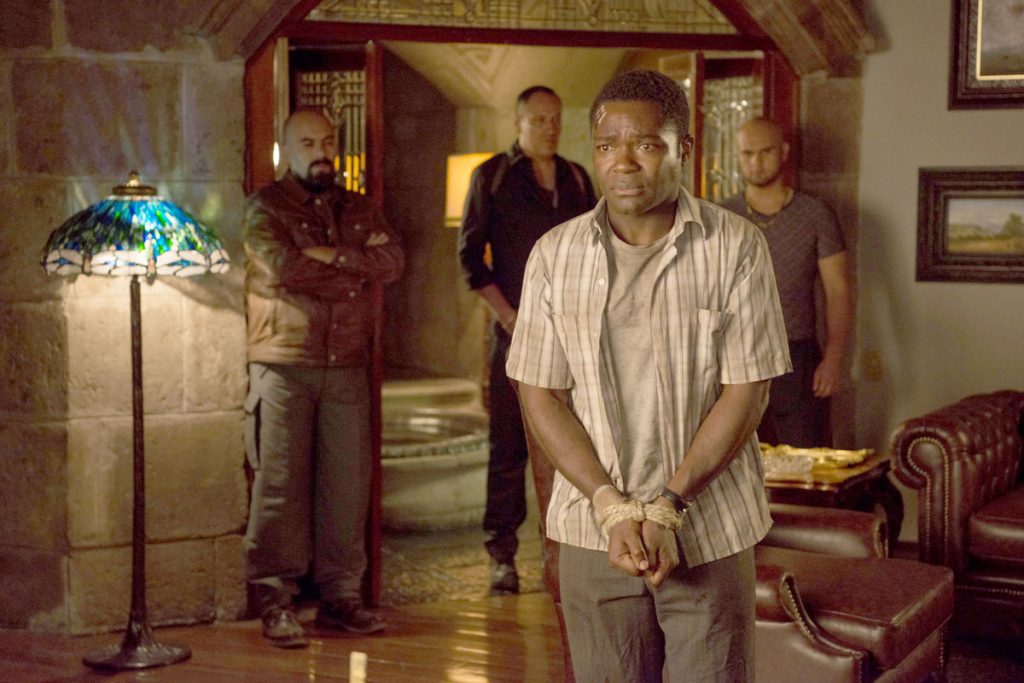 Is the Gringo Actually Funny...

Because that's all that really matters, right?  That's why we are here watching a comedy about a kidnapping that plays out like a two-legged horse race.  Is David Oyelowo funny?  The answer: I don't know.  Is Gringo funny? Sometimes.  This just wasn't something the film cared to answer.  David Oyelowo could play a tree on a windless day and you'd want to give him an Oscar.  The man commits.  The script doesn't. So while David Oyelowo is running around screaming barefoot on hot coals every scene bumbling his way through this story as intended,  other actors all seem to be making cameo appearances simply to spirit guide him to the next plan gone dumb.

David is tasked to be everything in this film except the villain.  It's almost a one man show from other people's perspectives.  He's the comic relief.  He's the object of empathy.  He's the morale.  He's the victim of circumstance.  He's the controlled variable mousing though this maze of terrible people, other terrible people, and more terrible people.  Sometimes he gets hit with a luggage bag and it's funny.  Other times he's being forced to put a sack over his head again and it's more heh than Ha.

Sharito Copley was actually funny-Ha at times too.  Paris Jackson was there for like 10 seconds also; she's cute.

But is it Entertaining...

So What Doesn't Work Here...

Just enough things to make it a poor choice for Amazon Studios to put it in theaters over streaming it exclusively on Prime.  Maybe they don't have faith enough in their platform yet to Cloverfield Paradox it, but they should have just ripped the Band-Aid off and done it.  Gringo is a good film for Friday-night streaming.  It's a mediocre draw for theaters even with the casting that plays out like a red carpet dinner party.  Pad that with the fact that Black Panther still has legs, A Wrinkle in Time opens this weekend, and somebody out there is still planning to matinee Red Sparrow or Death Wish because they either hate women or voted for Trump.  It's a good weekend to go fishing for a 60lb flop-per.

Aside from the outside forces and literal peer pressure, the story of this film is a runny egg mess with the life poached from some of these actors.  Thandie Newton is wasted.  Amanda Seyfried is wasted. Melonie Diaz is wasted.  And it's not their faults that you could have casted anyone to play those roles because their fat, pun intended, that could have been trimmed.  Melonie Diaz is probably the most wasted as Richard's secretary.  A whole sub-plot could have been built around her character that directly interfaced with Harry finally noticing all these men-in-monkey-suits he's been missing while passing that damn ball where in the end he and her foil it up for everyone and end up on Shawshank beach together.  The whole sub-plot surrounding Amanda Seyfried's character is simply here so she can get a cool text message.  Yes you read that right.  Thandie Newton is supposed to be this selfish, heartless, cheating wife so the film can make a fat joke later.  It's funny, so you'll allow it, but it's film fat and falls flat when you realize she's not really a terrible person but more someone possibly dealing with low self-esteem  or even weight-loss depression.

There's also this whole nother from an other nother sub-plot with the weed pills involving the ATF and the Cartel that makes you wonder if Harry's shoes use Velcro instead of laces.

What About The Director's Brother and The Other Producer

Joel Edgerton and Charlize Theron are just despicable characters.  Some how that works and doesn't work for them.  At times they're sparring off in shared scenes seeing who can be the most awful human being in a film while f-cking each other, figuratively and literally, but even then there's just nothing charismatic about it at all.  It's almost difficult to even believe that two people who seem pretty awesome in real life could ever truly be this vile.   The cartel cutting off people's body parts are more likeable and endearing than these two flat out racist villains.

Nash Edgerton is really making a huge directorial debut here and he doesn't do a bad job.  He just didn't do a really good job either.  The whole film is a convoluted mess of double-crossings and people with misplaced empathy who justify their actions, or have their actions justified for them, with loose logic that mostly involves everyone having a damn chip on their shoulder, and Lord there just ain't enough damn chips or shoulders.

Gringo, will suffer the same fate as Annihilation, another film that should have went straight to streaming.  If Amazon is going to make films like this, they need to reward their Prime members first.  It's not a bad film and it's not a great film.  It's a Friday-night couch flick that will make you giggle and keep you entertained.  Strangers: Prey at Night will probably make more money despite having one of the most offensively stupid after colon qualifier titles of ever.

6 out of 10 Tequila Back Shots