The Grind of Gaslighting: Downhill and The Assistant 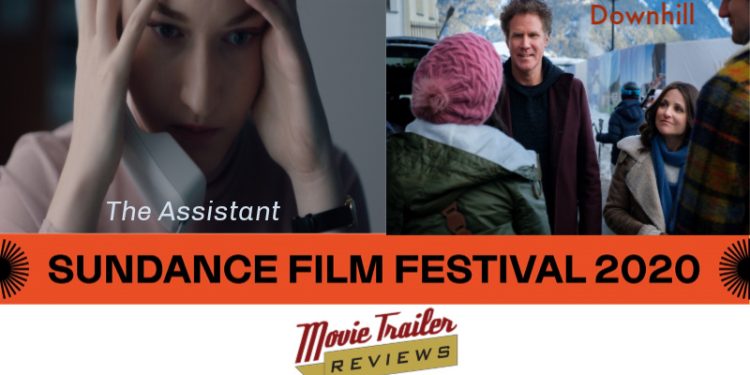 Joi (The Assistant)8
Ro (The Assistant) 7
Joi (Downhill) 6
Ro (Downhill) 6
Simple, yet effective in its delivery, The Assistant is a cautionary tale of how easy it is to ignore abusive structures. And once you're sucked in, how hard it is to speak up. Beautiful cinematography from Danny Cohen can't save Downhill. Miscasting of Ferrell and a fraught 3rd act, the bottom of the film's slippery slope is unsatisfying.
6.8

Sundance Roundup: Downhill and The Assistant

Joi and Ro sit down to discuss two  films showcased during the 2020 Sundance Film Festival. Each film's central theme, gaslighting, plays out subtly and in real time. Both film open the door to a discussion that ultimately ends up about relationships and the care you take of you while in them.

Written and directed by Kitty Green, The Assistant follows Jane (Julia Garner), a young assistant at a film production company with aspirations to rise in the industry. While doing her daily tasks, she gradually notices the inappropriate behavior of her boss. Motivated to speak up, her concerns reveal the complicit nature of the company she works for.

Green leverages her expertise in documentaries to edit and direct the story in a succinct manner. Explorative, we begin with Jane's daily routine as an assistant. Most of her duties are what you expect from an assistant. But scenes like Jane deep cleaning her boss' office and throwing out syringes set the tone that something is off in this work culture. The story is crafted based on implication versus "cold hard facts." This is not to diminish the severity of the actions, but rather confront the sobering truth that many sexual assault and harassment cases lack evidence for "believability."

The first twenty minutes of the film moves at a snail's pace. But it's deliberate in it's messaging: in the crawl of the day-to-day, we sometimes miss the red flags. Jane eventually can no longer ignore the signs and approaches Human Resources rep Wilcock (Matthew Macfadyen) in the climactic scene of the film. What proceeds is an uncomfortable moment of gaslighting, where Jane is made to feel unsure of the behavior she's seen. Shocked, she returns to her desk and is forced to email her boss an apology for reporting him.

The realization of this shady workplace weighs heavily on Jane. But in the end, we assume that Jane will clock into work tomorrow, to fight another day. Open about the inspiration from Weinstein and the #MeToo era, Green has stated her goal was to "make a project that tackles not just this misconduct, but these broader themes of a system that’s inherently structured against women[.]" She succeeds in taking these meaty themes and streamlining them, without undercutting the impact. Simple, yet effective in its delivery, The Assistant is a cautionary tale of how easy it is to ignore abusive structures. And once you're sucked in, how hard it is to speak up.

An American remake of the 2014 Swedish dramedy Force Majeure, Downhill - directed by Nat Faxon and Jim Rash - follows the Staunton family, led by the father Pete (Will Ferrell) and the mother Billie (Julia Louis-Dreyfus). While on a ski vacation with their children in the Alps, the couple experience what they assumed to be an avalanche. Pete's reaction to flee versus protecting his family causes problems for his relationships with his wife and sons.

The cinematography juxtaposes the dark family dynamics with bright sweeping shots. Danny Cohen has an easy muse in the beautiful, white Alps background. But being the cinematographer for films such as The Kings Speech, The Danish Girl, Room, and much more certainly helps. Cohen's eye is utilized best on the slopes, with stock photo shots of skiers enjoying the sport. He brings a lightness that marries well to this black comedy. It puts a spotlight on how even in the most beautiful places, families can crumble.

Even with such a stunning backdrop, the story hones in on how Pete and Billie aren't on one accord after the avalanche incident. Unfortunately, the written lack of chemistry of the characters is overshadowed by the actual lack of chemistry between the actors.  Will Ferrell is completely miscast as Pete, not finding the right balance between comedy and drama in his performance. Julia Louis-Dreyfus carries the emotional load of the film, course-correcting their interactions to the best of her abilities. It's another solid performance for Louis-Dreyfus, who's storied career shows proves she has the range. But she cannot hide Ferrell's underwhelming turn here.

Ferrell's miscasting is further exacerbated in scenes that are played for comedy but fall flat. One particular scene, Pete irresponsibly drinks and takes drugs before meeting his family for dinner. Under the influence, Ferrell leans into his physical comedy resume and starts acting weird at the dinner table. The scene feels like it was put in to showcase what Ferrell does best, but doesn't draw any laughs because of what causes Pete to act this way. In a combination of grief and mid-life crisis, Pete has been selfish towards his family throughout the vacation - and this scene is no different. The purpose to provide levity never comes to fruition and instead, it further frustrates you.

The third act is even more frustrating. Billie eventually gives an out to Pete to rebuild the family after he spends the entire vacation gaslighting her and the kids. To put the onus on Billie to do emotional labor is a story we've seen before. Throughout the film, the woman works overtime to pull the man on the side of right. He eventually gets it together, but not without a lot of help. It's disappointing to sideline Billie's efforts in order for Pete to save face in the end. With no remorse or consequences for Pete's actions, the bottom of the film's slippery slope is unsatisfying.