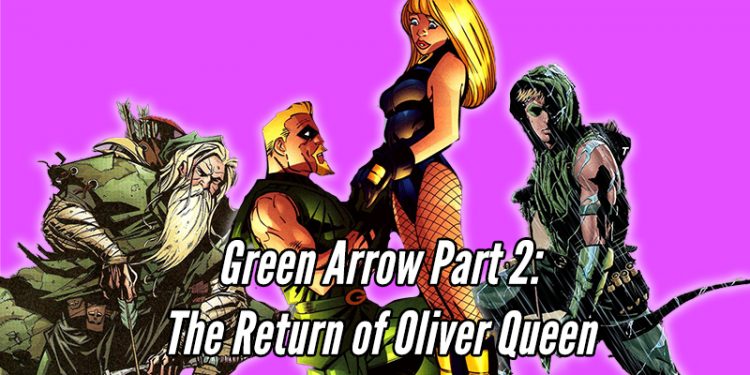 We’re back with part 2 of our Oliver Queen/Green Arrow Character Corner. We held off on it for a little bit so that we could record it after the final episode of CW’s Arrow. Watching Stephen Amell say goodbye as Oliver Queen while reading about Ollie’s return from death by writer Kevin Smith really complemented each other. It was fitting that Ollie’s return in the comics involved Hal Jordan as the Spectre as Arrow closes with Oliver being the Spectre himself.
Ollie’s return in the comics also sets up a clear difference between him and Bruce Wayne/Batman. It feels like the best stories with Oliver Queen always revolve around him being more grounded and emotionally connected than Bruce. We see Oliver struggle with finding the best ways to save his city while also keeping those around him, close. He struggles with the fact that he abandoned Connor at a young age, failed Roy and has a complex relationship with Dinah. There are ups and downs in this whole thing but it all sudden comes to an end with DC relaunching the character (and their entire line) with New 52. The first 3 volumes of the New 52 are...okay at best. They're not bad but they also completely ignore all of the character development that had been done previously with the character. Jeff Lemire's three volume run starting at volume 4 is pretty good but also feels like a set up for things that never come.
With the ups and downs of New 52, you can imagine we'd be a little skeptical of the Rebirth launch but the Green Arrow rebirth run by Benjamin Percy and others is absolutely fantastic. It does a good job of trying to tie in some of the pre-New 52 work with the New 52 stuff as well as finally reuniting Dinah and Ollie.
Give our episode a listen as we break it all down and wrap up our deep dive into Oliver Queen.
Issues:
Like what you hear? Subscribe so you don't miss an episode!