When does a city need a masked vigilante? When there are no lines drawn between the cops and  the criminals. In plotting this season's journey to the Gotham that we know and love, the show’s creators had to give us a police department that becomes so beholden to the criminal element that Batman will one day put on the cape and cowl. But just when you thought you couldn't watch Jim Gordon deal with this sinking ship any longer, in came Marvel's Daredevil to show us a version of the NYPD that is so corrupt poor Matt Murdock isn't sure who he can turn to in his quest to clean up Hell's Kitchen. So it's time to grade these police departments. Who takes the top prize for bad behavior.

The GCPD
The Charges:  Considering that one day this city will be noted for its number of masked criminals, it’s hard to imagine 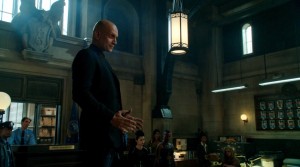 that the cops could be that bad but when noted hitman and psycho Victor Zsasz rolled into the police department and threatened young Det. Jim Gordon, everyone hightailed it out of there so fast their badges might as well have been hanging in the air behind them. From his first day at GCPD, Jim was forced into a world of moral compromise including having to pretend to kill Oswald Cobblepot to appease mob boss Don Falcone. Further transgressions include Harvey’s admission that he killed for Don Falcone, a police officer killing an eyewitness inside the police station, the police commissioner hiding a murder his own daughter committed and later coercing a fellow officer into tricking Jim into a case that would potentially get him killed. By the end of the season even Jim was working with criminals; hoping that with Don Falcone in charge at least Gotham wouldn’t descend into complete chaos.
The Defense:  Despite all this, Jim Gordon’s efforts have not gone unnoticed. After he was left high and dry, the officers’ resulting shame led to friendships with Captain Essen and his partner Bullock, and now the three have formed a strong opposition to the GCPD’s corruption. Also after Falcone’s decision to start a farm in Virginia (who do you think you are Don? Hawkeye?), Gordon has renewed his optimism and hopefully he’ll go back to the idealistic Jim we knew since he’s no longer beholden to Gotham’s mob families.

Daredevil’s NYPD
The Charges:  Daredevil gave us a slow build on their villians. Initially, it seemed like the people behind the machinations 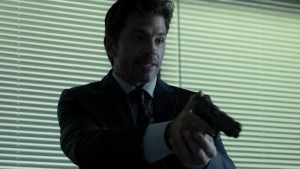 we watched were largely corporations and drug cartels headed by a cabal of players with a shaky alliance. But every shadowy cabal needs foot soldiers and it was mainly the members of the NYPD (headed by Detectives Hoffman and Blake) doing the dirty work. The officers helped set up Karen Page in the service of Union Allied. From then on they do Fisk’s dirty work, taking out the Russians, tracking down Vladimir and Matt for Fisk and Hoffman even agrees to kill his partner when Fisk needs to keep him quiet.
The Defense:  In this case, you have to give the police credit because who isn’t involved with the bad guys on Daredevil? By the end of the series the few good cops are arresting everyone from bankers to lawyers to journalists who were all complicit in Fisk and Co.’s machinations. Ain’t no conspiracy like a shadowy conspiracy because a shadowy conspiracy touches everyone. 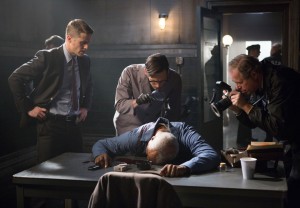 Although Daredevil’s NYPD is pretty bad, in this case their similarity to their real life counterparts actually makes them the less corrupt of these two police forces. You can actually envision a small squad of bought police officers working for a rich criminal. The GCPD by comparision is almost comical in how blatantly their officers allow crime to run rampant in Gotham and poor Jim is the little boy with his finger in the dam hoping to stem the tide. So due to that, I’d have to say the GCPD is the more corrupt of the two. Let’s all pray for Jim next season.