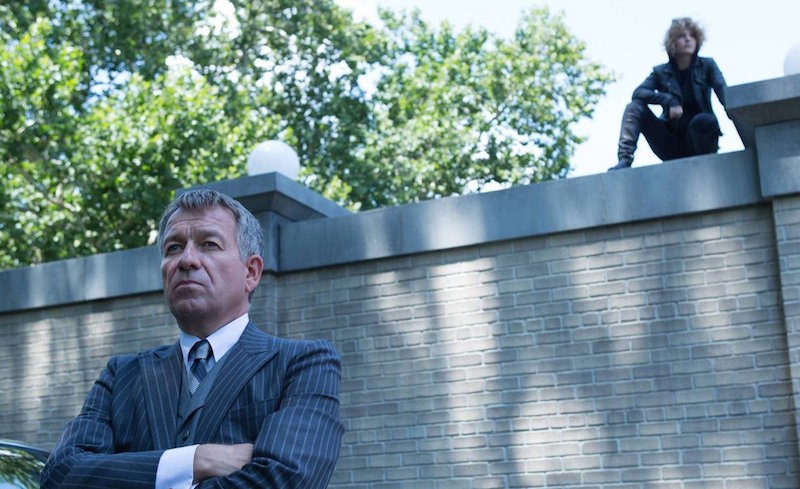 When it comes to the generally accepted criteria for what makes a TV Show or Movie quality, Gotham isn’t a good TV show. I’m not trying to start anything with this or get fans of the show upset, it’s just the truth. It can be very entertaining if you overlook all of it’s problems and I honestly think there’s room in entertainment for shows that might not be “good” but can provide basic entertainment value. I’ve come to terms with Gotham as being one such show as I continue to review it. It’s no secret I was dreading this whole “Rise of the Villains” concept they decided to go with this season and after the show limped out of it’s first Season, I was ready to be done. But I’ve been able to continue to watch Gotham by simply ignoring all the blatant issues it has and just accepting them. Truth is, there’s a consistency to Gotham’s inconsistency. Take a show like The Strain that went on unpredictable highs and lows with consistency throughout this entire second season. I’ve realized that kind of rollercoaster ride where I don’t know what quality of episode I'm going to get week after week is too exhausting for me to continue to watch a show. Gotham on the other hand, while it has its inconsistencies, they’re surprisingly consistent each week. You can predict and anticipate when the writers are going to take lazy shortcuts and therefore, be more accepting of them. Take last episode (Strike Force) for example. When Penguin limps into the Councilwoman’s headquarters to kill her. It made absolutely no sense why he would go himself.  Cobblepot has a great assassin in Zsasz on the payroll. Why would he go himself, particularly when he has the most recognizable limp on the show? Then to make things even more inconsistent, he actually sends Zsasz in to kill the next target. That inconsistency makes no sense on its own, but Gotham is full of these ridiculous inconsistencies that for this show, it makes perfect stupid sense. This is just how I've learned to deal with Gotham. I get why people enjoy watching it. I can enjoy parts of it as long as I don’t try to think too hard about the basics (like character consistency). It’s not a good show by any stretch of the imagination, but I can live with it’s quirks.

No, Alfred slapping Selina wasn't acceptable. At all.

This is why I had to write this article. Because while there are absurd but relatively inoffensive inconsistencies in the writing that I can live with, what I cannot allow this show to get away with is the fact that the show is starting to feel like it was written in 1995.  Gotham is starting to feel as if the writers are  completely unaware that there are just certain things that are no longer acceptable when it comes to writing television shows. In the last episode, Strike Force, there is one of the most disgusting scenes I’ve seen in a long time. While waiting for Bruce outside of his prep school, Alfred had a confrontation with young Selina and during this confrontation he smacks her. Not just any smack, but a windup, full strength slap that left not only Selina stunned but myself as well. There are so many issues with a grown man slapping a young girl, I don’t even know where to start.

First off, I have an issue with the way the show treated it as if Alfred was fully justified. Now let me say I’m not one of those people that believes that anything is off limits when it comes to TV and movies. I remember when people tried to say that rape shouldn’t be shown on Game of Thrones and I disagreed. I believe that things like rape, abuse and violence can be shown if they are shown with the same degree of respect that they deserve. The problem with rape being depicted on Game of Thrones for me is that so many times, it was written and shot as if it was ambiguous or almost glorified as if it was a sexy porn shoot. Then there was the infamous “It wasn’t rape” explanation of Jamie Lannister raping his sister and I took real issue with the writers not understanding the concept of rape. On Gotham, with Alfred slapping Selina, the scene is shot and written as if Alfred is in the right for “protecting” Bruce from the “bad Selina”. It’s absolutely disgusting. Let’s refresh ourselves on Alfred’s reasoning; Alfred slaps Selina because (somehow) he knows she killed Reggie. Let remember that Reggie was Alfred’s old war buddy that was secretly hired by Wayne Enterprises to spy on Bruce Wayne to see what he knows. Reggie ended up stabbing Alfred in the chest and nearly killing him and putting Bruce in harms way. That’s the man whose honor Alfred is defending by slapping Selina. The man who tried to kill him. So now Alfred is using Selina killing Reggie (which he has no proof of by the way) to justify slapping her. I’m sorry but that’s unacceptable.

On top of that, this was completely out of character for Alfred. Just last episode he was politely putting the moves on Leslie. Perfect gentleman. The episode before that, he threatened to kill Lucius Fox if Fox every betrayed him but did it in what might have been the most polite death threat ever. Alfred has been portrayed as noble and gentlemanly in every scene on this show. While it was no secret that he felt some kind of way about Selina, at no point did I ever feel he would get violent with a little girl. Now, suddenly, this noble man thinks its appropriate to wind up and smack a 13-14 year old girl in the face. This is part of the consistent inconsistencies that Gotham brings from it’s writers. They constantly contradict character traits with cheap scenes like this. It’s lazy writing and in this case, it went too far. I honestly don’t see how they correct this going forward. As far as I’m concerned, Alfred just assaulted Selina for no reason and there’s really no way for them to go back to portraying him as a “good guy” after that.

And that is the most disgusting thing about this whole thing. The simple fact is that a grown man was displayed hitting a young girl and that’s never okay. On a visible level it was as disgusting as watching the Ray Rice elevator video. It was completely uncalled for and unjustified and in the end, Alfred is left standing there like he’s some noble hero for doing that. Selina runs away and Alfred then goes on to talk to Bruce like nothing happened. Honestly it comes off as if the writers of the show cosign Alfred’s behavior instead of condemning it and that’s unacceptable. 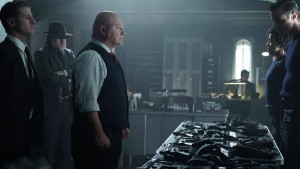 The Alfred-Selina sequence highlights the real issues with Gotham which is the fact that it comes off as being written by a bunch of juvenile white men with no concern for how their writing is actually being viewed by the audience. Another perfect example of this is the completely tone deaf “broken windows policy” speech that Captain Barnes gives to the new strike force. Captain Barnes is introduced this episode as a no nonsense, “good cop” who is going to clean up the GCPD and Gotham. Then this episode ends with him giving a speech that is based off of controversial policies that the NYPD uses in real life that are attributed to the harassment of minorities. They might as well have had Captain Barnes say they were going to implement “Stop & Frisk”. In 2015, to have a show that promotes these policies as somehow “good” for cleaning up a police department requires a writing room that is completely oblivious to any of the real life critiques and complaints about police that have been extremely prevalent and vocal in the last 2 years. I find it difficult to believe that a diverse writers’ room would throw these lines in there (that are completely unnecessary to the story) without pointing out the flaws in them. DC Comics has actually done a  decent job recently of including some of the real life issues of protesters and citizens in their comics.  Batman #44 has Batman dealing with the issues of police brutality and gentrification. Action Comics #42 had Superman standing beside protesters. Yet here on Gotham we got a “good cop” giving us a broken windows speech. Tone deaf doesn’t even begin to explain what’s going on here. 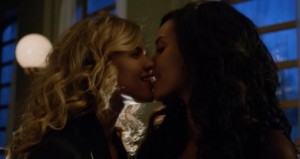 Barbara's only reason for existing is to be a sex object

Again this isn’t new though with this show. Women have been treated horrible this season even beyond the Selina slap. Hate her or love her, one thing you had to give credit to the character of Fish Mooney was that she was a force to be reckoned with. She was a commanding presence, had her own motives, owned her sexuality and forged her own path. She had agency that some of the other male characters didn't even have. Since her “death”, every female character on this show has been squandered, with some even taking huge developmental steps backwards. Selina has become reduced to nearly nothing and has just been humiliated. Captain Essen was killed and replaced with a white man for no reason. There’s no reason story-wise why Captain Essen couldn’t do what Barnes is doing now. She was actually on that path and then they killed her. Tabitha could have been great had they kept Theo’s involvement secret and used Tabitha to run everything. Instead she’s just an errand girl to her brother. Leslie is nothing more than Jim’s love interest. Ms. Kringle only responds to men that either are abusive or are creepy. Nygma’s whole “But I’m a good guy” routine screams Men’s Right Activism and Kringle is falling right into it. And then there’s Barbara.  In responding to the hate that everyone had to Barbara in season 1, Gotham has decided to fix that by just making her a crazy bisexual sex object. Barbara’s role in the latest episode is to do nothing more than kiss another hot woman and lick on a icicle. It’s as if the character of Barbara is being written by Hideo Kojima. If there are women writers on Gotham, I can't tell. Even if there are women and other minorities in the writing room, its clear that they're only parroting the same types of problematic writing we've grown tired of and that needs to change immediately


These are the things that make Gotham a bad show. I can deal with the straying from canon. I can deal with the laughable consistent inconsistencies (Why didn’t Penguin tell Jim about Galavan, Why wasn’t his mother moved into his house, etc). What I can’t deal with is writing that is 2 decades too late. Gotham isn’t a period piece. This isn’t Agent Carter where I expect a certain level of sexism. Gotham is being written very lazily by people who seem to only care about pleasing white male viewers and I’m not happy with that. There is a decent enough show in Gotham that I could watch. But not if what they pulled in episode 4 is going to continue. We deserve better.