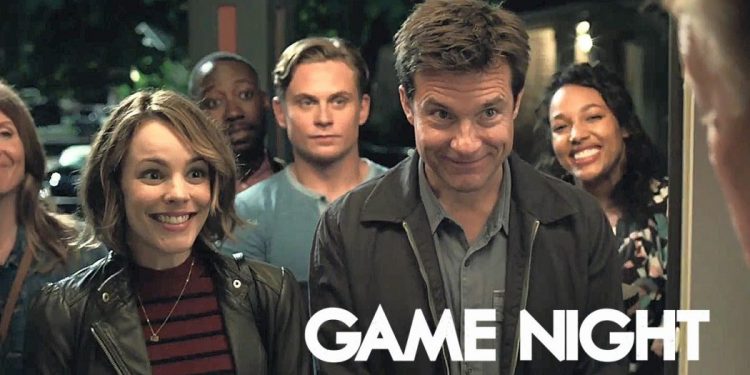 Game Night, a film that's been sticking the exact same trailer in previews for what feels like a whole ass year finally drops this weekend and it's actually pretty damn funny.  Nope, I take that back.  This film is dumb funny, like, stomach pains, knee slapping, teary eyed, "I can't breathe" hilarious.  Cackles heard round the theater was not something I expected from an ensemble casting that bravely expects the audience to believe Rachel McAdams would let Jason Bateman put a ring on it.  What could have easily bombed atomically played out as a brilliantly written comedy with slap stick humor, astoundingly clueless characters, and endless shenanigans.

Take a look at this picture above. It completely captures the elements that come together to make a film like Game Night work.  The young lady from Pitch.  The black guy from New Girl.  The "I think I've seen that dude in something" white guy.  That woman with that accent from that Amazon Prime show.  All these characters could have easily been fluff rounding out the necessary party for this game night disaster movie.  Instead, they each play up to the personalities you see in this promo shot: the black wife hiding something, the black dude who just found out his hot wife is hiding something, the stupid pretty dumb-dumb blonde guy, the Australian surrounded by dumb Americans, the loser husband, and his I-Yoga-Hard wife.

It's a pretty basic story.  Jason Bateman plays Max, who's having issues with his sperm count due to a dreaded game night with his nauseating, Return of Jesus Praised brother, Brooks.  Rachel McAdams plays Annie, his competitive wife, who sees the sibling rivalry as a challenge to her impregnation.  Brooks decides to host the weekly game night at his house but with a new game involving a fake orchestrated kidnapping mystery raising the stakes with an unbelievable prize.  Immediately crap goes to shit when real kidnappers hilariously abduct  Max's brother while everyone watches over chips and dip.  The group breaks up into couples looking for ways to cheat and soon discovers the kidnapping was real and their lives are in danger.

The Parts of the Some...

I can't stress enough how much these actors carry this film.  Rachel McAdams plays cute, innocent, supportive, and ditsy so well.  Jason Bateman plays Jason Bateman very Jason Bateman-ly.  Kylie Bunbury and Lamorne Morris play high-school sweethearts couple Kevin and Michelle spending the most of the film bickering over some secret celebrity Kylie did the nasty with year ago.  The reveal of the celebrity infidelity leads to one of the funniest flashback scenes ever in a film.  Billy Magnussen has a hard-on for Fight Clubs and a brain full of Doritos Bag Air.  Jeffrey Wright shows up for 5 minutes to lifelessly get kicked in his side.  And Sharon Horgan is the audience in Australian.

But the real star of this movie is Jesse Plemons who plays Max and Annie's creep cop neighbor, Gary.  Gary used to be invited to Game Nights but his wife left him and he was her +1.  Gary is walking awkward.  He looks like he measures his grass and eats cold tomato soup with Triscuits. He's an amalgam of atonal charisma, creepy stares, overly silent pauses, random pop-ups, and holds his dog like a cat.  People who hold their dogs like cats can't be trusted.  He's your serial killer's favorite serial killer.  Get this man an Oscar.
There's even a surprise cameo that caught everyone in the theater off guard and kept the party going.

Game Night does a great job of setting the bar for following comedies this year.  It's a film that refuses to not be funny and fun.  Now I miss when Horrible Bosses was good.  A sequel isn't at all farfetched.
8.5 out of 10 Half Tortoise Poses