The Flash: Things You Can’t Outrun 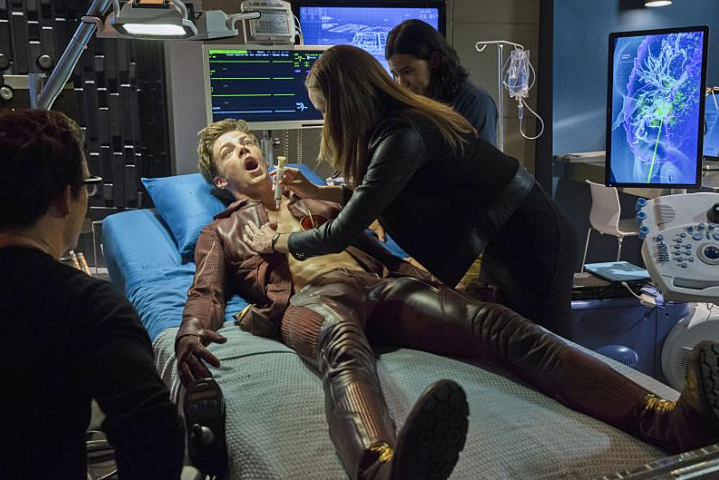 The pilot episode was great.  The second episode kept the ball rolling.  This third episode proves to me that The Flash is not going to slow down but continue to be great to watch.  Look, its not perfect, no TV Show or movie is.  I’ve seen some reviewers nitpick and struggle to find something to complain about.  News Flash:  In the first season of shows like this, “Villain of the Week” storylines are typical.  You throw out some lower villains that no one cares about while you build up the surrounding characters.  In the case of Barry Allen, he’s still learning just how powerful he is.  So it makes sense they build him up to some of his bigger villains.  Not to mention, have folks ever read comic books?  It's a lot of "Villain of the Week" stuff with the larger plotlines working in the background growing bigger and bigger.  Just give it some time.  We're 3 episodes in..THREE...not thirty.  So when I see a review that complains about “villain of the week” in the first season of a show, I know their reviews are pretty worthless.  Most shows do this.  And most also don’t do it as well as The Flash. 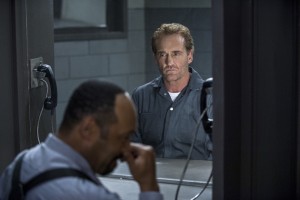 I remember when Jesse L. Martin was cast as Joe West and folks complained because he’s African American.  Well…he’s killing this role.  I pointed it out last week, but Joe has these “Black Fatherhood Moments” with Barry Allen that are just great to watch.  I loved that they made the decision early on to have Joe know about Barry’s powers and to actually help and support him in being a hero.  The scenes between Joe and Barry are great because you truly believe that Joe sees Barry as his son.  The chemistry between Martin and Gustin is absolutely great.  The scene when Joe talks to Barry about why breaking his dad out of the prison would be a bad idea was perfect.  I also liked how later when Caitlin said they would find Barry a way into the prison he said he already knew because he's been thinking about breaking into Iron Heights since he was 11.  I also loved Martin’s scenes with Shipp at the jail.  And then there’s his whole reaction to Eddie and Iris admitting they’re seeing each other (“If the doctor hadn’t taken my gun this conversation would be going a lot different”).  Seriously, when you look past all the cool effects and superhero stuff, Jesse L Martin just might be the best thing about this show.  And I’m not saying that to take away from anything (or anyone) else on the show.  Things are great but he’s been blowing me away with his performance. 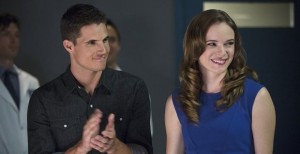 A surprising element of this show is the emotional scenes we get.  We got several with Martin & Gustin (also with Shipp) but we’re getting some of that from other scenes as well.  We got to see what actually happened at STAR Labs the night of the particle accelerator explosion. Robbie Amell (Stephen Amell’s cousin) made his debut as Ronnie Raymond, Caitlin’s ex-fiance this episode.  We know we’ll be seeing more of him.  But it was good to see Caitlin open up more and be more vulnerable.  I talked about Gustin’s chemistry with Martin but he actually has pretty good chemistry with everyone in his Star Labs team.  I really enjoyed the scenes with Gustin and Panabaker (Snow).  If there is one nitpicking complaint is that if you’re aware of the background, they’re laying it on pretty heavily with the Killer Frost/Firestorm foreshadowing.  I call that a nitpick because I’m aware, if I wasn’t, I probably wouldn’t even think twice about it.  I do wonder if it’s going to come back that Cisco closed the door (on Robbie’s orders).  Looked like he was going to tell Caitlin but she cut him off before he did.  It will be interesting see if that comes back.  Also, I’m still wondering who Wells is.  He could be Reverse Flash but that still seems almost too easy to me.  I wouldn’t be against it though.

One small thing that I’ve been enjoying about this show is the little voice over narration Barry does at the beginning of the episode.  I know it’s not much but it really does set the tone for the episode for me and I really enjoy it. 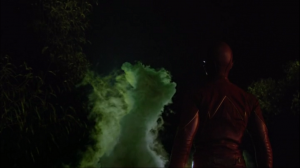 The villain this week wasn’t as cool as Multiplex, but he served his purpose:  The makeshift metahuman jail at STAR Labs. This is yet another difference between this show and Arrow.  Oliver went the whole first season killing folks and it wasn’t until the end of season 2 that he actually found a place they could use to start putting villains away.  Here in episode 3 of Season1, Barry Allen and his team found a place they could actually lock away some of these metahumans. It’s going to be interesting to see when they decide to go Once again the Special Effects on this show are amazing for a network TV show.  The mist effects looked great.  I even liked the effects for Barry trying to fight him.  One thing that stood out to me was when Barry went to the prison to save Joe, he blurred his face so that his father couldn’t see that it was him.  I love the fact that this show is showing Barry use his powers to do more than just run fast.  I’m telling you, the first time they show him vibrating through walls I’m going to lose my shit.

We’re three episodes in so folks are of course going to start nitpicking and finding things they don’t like about this show.  I’m so glad I’m not one of those people.  I’ve been enjoying this show so much and it’s off to the best start I’ve seen from a comic book show ever.  CW learned their lesson from Smallville with Arrow.  With The Flash they learned the lesson from Arrow that they don’t have to compromise as much with the source material and are going 100% in with the comic book references.  This show has been a real treat.