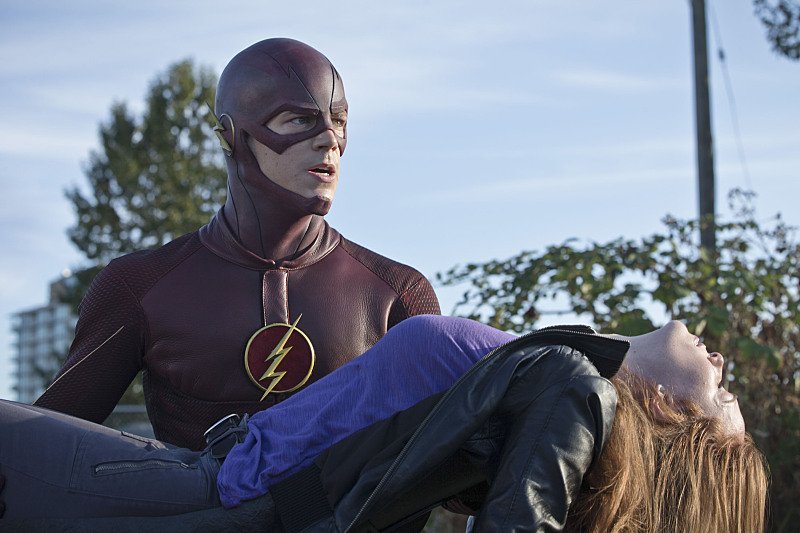 I’m not going to lie, this show has to do something pretty bad to lose me.  I don’t see how anyone could not like this show.  Gotham not for you?  I like the show but I can understand.  Still can’t get into Agents of SHIELD even with this flawless season?  I guess.  Constantine? Ok, I do agree here but I also see why people like it.  But The Flash?  Yeah this is one show that I have to believe gets universal praise because it’s really that good.  The CW pulled out all the stops and I think they realize that in the nerd culture market, if you’re going to put an A-List character like Barry Allen on TV, then it has to be damn near perfect.  And they’ve put their money where their mouth is.  The beginning of this episode has Barry running up the side of a building and they close with him one-upping Jesus Christ but running, not walking, over water.  I don’t see how you could watch this show with a shit eating grin on your face.  Seriously, if you find yourself not enjoying this show, seek medical help. 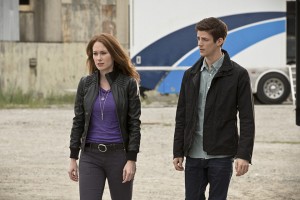 Let’s get the weakest stuff out of the way first.  General Eiling and Bette Souci were the weak links this episode but not as much as you would think.  I liked the concept of Souci aka Plastique (Cisco nailed it on the first try this week lol).  She’s the first metahuman outside of Barry that they’ve come across that really isn’t a bad person trying to kill everyone.  She’s actually kind of a tragic character with a  tragic end.  I also liked what she represented for Barry:  someone he couldn’t save.  See, I don’t mind underdeveloped “villains of the week” if they are used to help develop the main characters and that’s what Souci did for Barry.  He realizes he can’t save everyone and that while his powers are a blessing, they can be a curse for others.  The problem I had with Souci is that they just didn’t use her enough.  She had some pretty cool powers and I actually like Kelly Frye as the character, so it seemed like such a waste to introduce her and kill her off in the same episode.  Now I will say, I still think there’s a possibility she comes back.  I know what you’re thinking “Kriss…SHE BLEW UP!”  Yes but two things.  First, when you’re writing a show with superpower metahumans and the theme is “literally anything is possible” then bringing a character back from the dead isn’t unheard of. And comic books do it all the time so its not like its a stretch from the source material. Secondly, this show is being brought to us by the same team that gave us Arrow and so when I watch it, my senses are heightened to throw away lines.  Professor Wells says a lot of seemingly subtle and inconsequential things this episode but one thing he said in particular to Souci was that the technology needed to unsplice her DNA “has not been invented YET.”  We know Wells knows the future and later one he even told her before telling her to go kill Eiling was “and then you can go home.”  Now he could be talking metaphorically or…something more.  We’ll see.

I think I will like Clancy Brown as General Wade Eiling because I like Clancy Brown but Eiling wasn’t pretty generic of a character.  I’m not too worried though because I’m certain we’ll be seeing more of the General as well as more on his relationship with Professor Wells.  Speaking of Wells….it’s clear he’s up to no good.  But at the same time, I’m wondering why.  He didn’t want the General getting his hands on Metahumans but is that because he’s more interested in controlling them himself?  I mean we all got hyped when we say the glimpse of a gorilla named Grodd but Wells said he had “bigger plans” for him.  If Wells is aware of the future then he has to know who Grodd becomes.  So again I have to wonder, just who is Wells and what are is plans for the future (particularly Barry’s).  Also I have to say, who thought The CW would have the balls to actually do Gorilla Grodd?  I mean sure, we haven’t fully seen him yet but…we know it’s coming.  I found another line from Wells to be interesting:  “Powerful men have  a way of avoiding consequences.”   Wells was talking about the general at the time but could he also have been referring to himself? 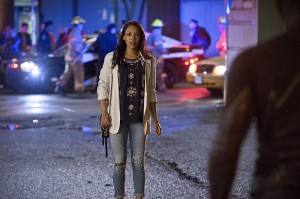 And now it’s time for our weekly black fatherhood moment with Jesse L. Martin as Detective Joe West.  Martin & Gusin have such great chemistry.  Joe hit Barry with that black parent “You might think you’re grown….” shit when he told Barry he would still “ go Floyd Mayweather  on him.”  Even the fastest man alive can’t escape the wrath of an angry black parent.  Then he follows that up with being entirely too tickled at the new trick Barry learned about how to “autotune” his own vocal cords.  But the best was when he hit Barry with that “you don’t tell her everything…” and revealed that he’s known the whole time that Barry is in love with Iris.  Hell, part of me believes that’s one reason Joe doesn’t like Iris with Eddie.  He’s rooting for Barry to man up and reveal his true feelings for her.  I actually like that Joe can be a father figure for Barry but still root for Barry to tell his daughter how that he loves her.  I’m also ready for Iris to find out that Barry is the Flash….I mean The Streak.  It’s only been 5 episodes so far this season so I know they’re not stretching this out, but they’re putting all the pieces there for her to know about Barry at some point this season.  They’ve been moving through these subplots and tropes pretty quickly and I expect this to be resolved fairly soon.  We even have the “falling out” between Iris and Barry, which we know won’t last long.  I mean Barry even told Joe that the only way they would be able to get Iris to stop would be for him to tell her.  So the signs are there that this secret won’t be kept for long. And that’s a good thing because it’s going to become increasingly hard to believe that Iris won’t be able to figure out that Barry is the Flash and as was mentioned, that someone won’t come after her to get to him. 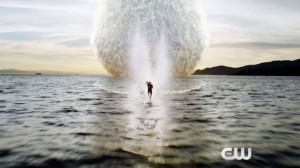 The effects on this show are still “Holy Shit” amazing.  Barry is getting faster and more powerful each week.  He’s also using his powers in different ways.  I never would have thought CW would be this close to the comics with the effects they’re using.  I need to know their secret.  We got Barry blurring his face and vibrating his vocal cords to change his voice.  Barry even stops the same way he does in the comics.  It’s truly amazing.  Each week they give him a reason to go faster.  This week, he needs to run up the side of a building to save someone.  Then he needs to run fast enough to stay above water in order to drop Plastique’s body off.  The cool thing about it?  They even through in some science calculations from Caitin & Cisco to give it a little bit of authenticity.  The scene with Barry running over the water is seriously one of my favorite scenes in a comic book TV show of all time.  It’s such a comic book thing to do and it was shot perfectly and had the right amount of tension and suspense.  Also, we have to recognize Blake Neely and his score.  The music, particularly for this scene was perfect and added even more to it.  Caitlin told Barry that he’s in “good company” now with his new feat but to be honest, Jesus only walked on water, Barry Allen ran.  In Barry Allen we trust.

Caitlin and Cisco give us some good comic relief this episode.  First Caitlin drooling over Eddie and asking “Omg…do I sound like Felicity” (even funnier because she did) and then we had Cisco fawning over Souci (“I’m sorry…that was inappropriate”).  I even liked that Cisco was pissed that one of Barry’s suits blew up.  You can tell Cisco takes pride in his inventions.  I also loved the little bonding they did at the end of the episode by trying to get Barry drunk off what was basically rocket fuel.  Again, its the little things.  If Barry’s metabolism is operating that fast now, it stands to reason he can’t get drunk.  It’s okay Barry, Steve Rogers has the same problem.  You're in good company.

This was another great episode.  This show has damn near been perfect.  Even when it has a weak main ‘villain’ the show survives with great acting and chemistry among the main cast as well as the best effects I’ve seen on Television.  You can’t go wrong with this show.  Oh and next week, looks like Barry might go super sonic.  CAN’T WAIT.