The Flash: S1E9 – The Man in the Yellow Suit Review 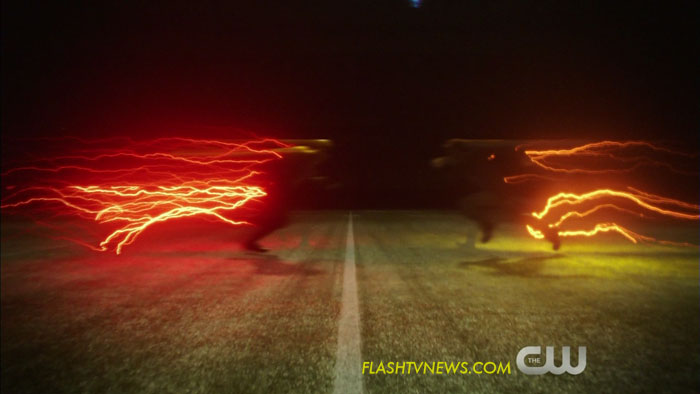 Looking back to Fall of 2013, I remember being a little worried when they said they were thinking about adding super powers to Arrow. The show seemed to be working fine as a realistic vigilante show and I thought adding super powers might be weird. I got even more worried when they talked about adding in the Flash and possibly doing a spin off show. Arrow was good but to do The Flash CW would have to step its game up. Everyone remembers the disappointment of Smallville. Even if you enjoyed that show, you have to admit the effects were pretty cheap and disappointing and no one wanted that for The Flash. Then they cast Grant Gustin and folks were a bit worried because he really didn’t have a lot of background material to judge him on. When he debuted as Barry Allen on Arrow for two episodes we realized he was actually pretty good and folks got curious as to just what the spin off show would look like. When we saw the effects in the pilot for The Flash we realized that The CW wasn’t playing around and was taking this very seriously.   We still had to wonder: How far are they going to take this? Well, after seeing the winter finale, The Man in the Yellow Suit, I think it is fair to say that they’re going to not only go “there” but just about anywhere you could imagine with this show. 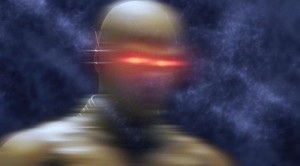 This episode was an amazing hour of television. It literally opens with Barry chasing after The Reverse Flash in an amazing sequence. One of the most surprising things about this show has been its ability to maintain high quality special effects and action sequences. This episode was a great example of that because we got not one speedster but two. The way they introduced and handled Reverse Flash was great. We still don’t get a clear look at who he is (I think it’s much more complex than the Wells reveal at the end). I liked that Reverse Flash kept himself vibrated so we couldn’t clearly see him and that his voice was modified slightly different than Barry’s. In addition to introducing Barry's archenemy, it's also going to provide Barry plenty of motivation for becoming better and faster.  He gets his ass whooped not once but twice by the Reverse Flash.  Barry even says he's not the fastest man alive, Reverse Flash is.  So Barry now has motivation to elevate his power and training. Reverse Flash beat him twice and both times just left him there.  It's like when you play Shadow of Mordor and the Uruk who beat you is so confident in his abilities he won't even bother finishing you off because you're not worth the energy.  Barry now has every motivation in the world and I expect their next meeting to be even more epic.

I still believe that the Reverse Flash we see in this episode is either a future version of Eddie or a relative of his. Reverse Flash stared at Eddie and even moved him out of the way when Joe tried to shoot. Compared to how he dealt with everyone else, I think that’s actually pretty important. The fact that Wells has a yellow suit hidden himself and ended up with the tachyon device confirms for me that he’s working with future Eddie (or a relative of Eddie). There’s basically two Reverse Flashes: One is Wells and the other is a Thawne. I’m also now leaning towards Wells being the one that killed Barry’s mother. Two reasons for that:

Things are starting to come together with this though. We can separate the two by maybe labeling Wells as Professor Zoom and whichever Thawne was donning the suit as Reverse Flash. 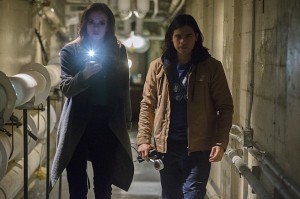 Another major part of this episode was Ronnie returning as Firestorm. Now, from a critical point of view, I will say this plotline in this episode seemed a bit forced but it didn’t matter too much to me. Firestorm looked pretty awesome and he flew. He can fly guys. They really decided to go there. While he did tell Catlin to never come look for him again, could we possibly see a teamup of Flash & Firestorm since he did pretty much save Barry’s life?   Something else that caught my attention was when Catlin and Cisco try to talk to Ronnie, he says Ronnie isn’t there. Could it be that they’re hinting at him having dual identities like the comic book version? So while it was forced in a bit and did interrupt the flow of the episode, I think the introduction of Firestorm is going to have a larger impact going forward. 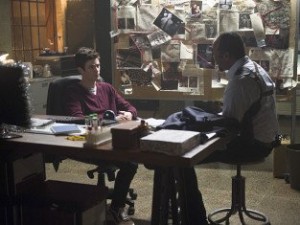 Jesse L. Martin has been fantastic on this show. Each week we get another set of “black fatherhood moments” with Joe and Barry and they’re just great. I loved the talk he had with Barry about being unsure of adopting him and how that would work. This week, we even get John Wesley Shipp jumping into the fray and giving Barry some advice to move on and stop wasting his life trying to figure out the mystery of the man in yellow. I also like that apparently everyone knew that Barry loved Iris…except Iris. Apparently his secret identity isn’t the only thing Barry couldn’t keep secret. I do appreciate them finally having Barry confront Iris with the fact that he loves her. As one would expect, Barry had TERRIBLE timing telling her but it could have been worse…Eddie could have been around the corner and heard the whole thing.   This is yet another example of how fast this show is moving. Nine episodes in and we have Barry telling Iris his true feelings. Most shows would have dragged that out for at least a season, maybe more. It took Oliver 2 whole seasons before he finally asked Felicity out on a date and told her how he really felt. I appreciate them fast tracking this part of the story. Now all we need is for Iris to realize Barry is her true love and I predict that will happen before this first season ends. 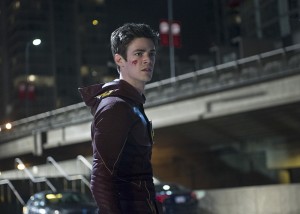 Couple of smaller points to close out this review. Cisco is still the man. I love the fact that because he’s always naming the villains, he has to announce when he’s actually not trying to come up with a name. I think Cisco is going to be the one to realize Wells is up to something. I think he’s going to dig into why the containment field didn’t work and uncover something. I also caught a glimpse of the ring Wells had. It reminds me of the ring Barry uses in the comics to keep his suit in. Makes me wonder if we could see them upgrade Barry’s suit to compress down to something that could fit into a ring. It seems a bit inconvenient even for the fastest man alive to have to run to Star Labs for his suit every time there’s an issue that requires his unique talents. Also, we know Wells has to be from the future and the talk of tachyons really leads me to believe we’re going to be dealing with some sort of time travel this season. It would explain the two Reverse Flashes. Cisco mentioned there had to be another speedster there the night Barry’s mother died and it makes me wonder if maybe Barry saved his younger self. I always wondered why the Reverse Flash would move Barry out of the house. Even if he didn’t kill him, he could have left him there and had him see his mom die as torture. It makes sense to me that if Barry from the future is the one that took his younger self out of the house. Something to think about.

I can’t wait for this show to come back. This has been a great first season so far. I love the fact that CW is rocketing past all expectations and are treating this A-List character with the respect and detail he deserves. Fantastic episode.