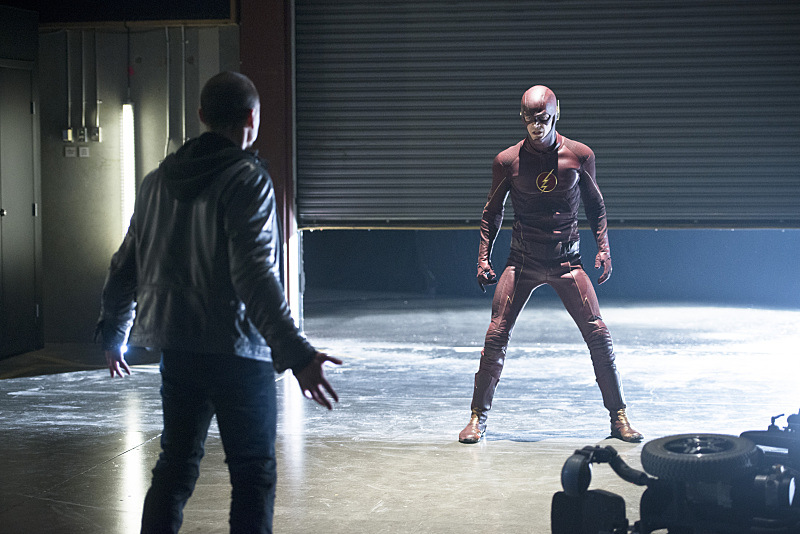 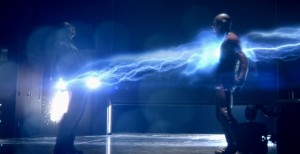 There has been a theme with this show to go through the traditional tropes we’ve seen in other TV shows (and movies) but do them in refreshingly better ways.  I won’t lie, when I saw the synopsis for this episode, I was nervous and thought I wouldn’t enjoy it.  It was the classic “de-power” trope and I wondered how this would affect a show that relies heavily on Barry Allen using his powers whenever he can.  But not only did this episode turn out to be very good, the de-powering of Barry for this episode is going to lead to even BETTER things for him in the future. 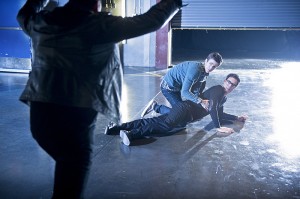 The reason this episode works so well is that this isn’t just a throw away episode.  It’s really more about giving us a look at Professor Harrison Wells and trying to push us to believe he is Reverse Flash.  I’m still not convinced he is but I’ll talk about that later.  We learn that Wells is trying to preserve an event in the future that involves Barry Allen disappearing. In order for this to happen, Wells needs Barry to kick his powers into overdrive and become faster.  I’m very curious of the future event.  Could it be something similar to Crisis on Infinite Earths?   It could be a very interesting way for WB/DC to explain their separate movie and TV show universes.  This is why I’m still not sold on Wells being the Reverse Flash.  They’re just too heavy handed with it.  Even at the end when he seemingly removes something from Farooq to test later so he can find out how Farooq took Barry’s powers…it’s just TOO obvious.  The signs are so heavily pointing to Wells that I think its classic misdirection.  I believe, especially after this episode, Dr. Wells is too complex of a character for his motives to be revealed as Reverse Flash. He's clearly not all good, but I don't think he's all bad either.  He still could have something to do with the death of Barry's mother because he knows that's part of the catalyst for Barry becoming the Flash but I don't think he's Zoom/Reverse Flash himself.  Unrelated, I also want to point out that Firefly alum Morena Baccarin was the voice of the computer, Gideon, that Wells uses.  We’ll see more of her on Gotham after the break as Dr. Leslie Thompkins. 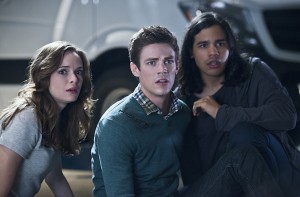 When Wells was documenting his findings, he mentioned how he was wrong to believe that close personal relationships were distracting Barry and holding him back.  He realized that the opposite was true.  This episode really built on that.  Barry lost his powers but his commitment to his team and believing his destiny is to be a hero is his biggest driving factor.  As I said before, the “de-power” trope usually sucks because nothing comes from it.  But in this case the used it and Barry Allen is now going to be even faster.  They used this episode to help Barry overcome the mental blocks he was having that as limiting his power.  I might not like this trope, but I will take it if this brings us one step closer to Barry phasing through walls.  I also like that it helped build up relationships on the team.  Caitlin and Barry had some great scenes together.  It was great seeing her hesitation in helping Barry get his powers back because she was afraid it would go wrong like it did with Ronnie.  I thought it was also any important moment to see Barry finally look at Dr. Wells and see that maybe he’s not all he claims to be.  Now by the end of the episode, Wells has successfully pulled the wool over Barry’s eyes like he did Joe but it’s a start to see the seeds of dissent. 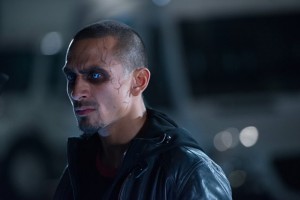 Like Arrow, this show does a good job of addressing things that you begin to notice but think the show writers are ignoring. Barry’s been revealing himself an awful lot to villains.  I thought it was strange that Barry would reveal himself to Tony last week because….if Tony ever escaped, he would know Barry is the Flash.  This week, Barry reveals himself to Farooq (Blackout).  In the case of Farooq, its understandable.  Barry sees another metahuman like Souci who is lost, confused and just seeking help.  But, we all know revealing himself to every villain isn’t sustainable.  And this show fixed that.  As soon as Wells went to Tony and released him, I knew Tony was going to die.  I also knew that meant Farooq probably would too (Although i’m not certain he’s completely dead).  We got a metahuman villain fight AND an easy way to make sure the number of people who know Barry’s secret is back down to manageable. 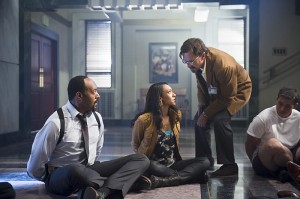 All this and I didn’t even mention Clock King.  Robert Knepper was great as William Tockman/Clock King on Arrow and he was excellent here on The Flash.  I didn’t mind the hostage scene at the police station because it also added to Barry’s frustration about not having his powers.  With his powers he could take care of both threats but without, he’s just as helpless as Joe & Iris were.  The ONLY thing I would have asked for would be a different ending with Iris.  I knew she was able to take a gun from Eddie but I would have preferred if maybe Oliver showed up and saved the day.  Clock King is one of his villains and it would have been an easy set up for next week’s Arrow vs Flash crossovers.  I would have preferred this because then the ending would have had a bit more purpose.

Oh and I can’t end this episode without my weekly Joe West Black Fatherhood moment:  Joe tossing Barry’s favorite mug to see if he could catch it.  It was a hilarious “I told you I didn’t have my powers why would you do that?” moment.

Another great episode for The Flash and one that took a trope that usually is pretty boring and made it an exciting thing to watch.  I’m now even more pumped for the 2 episode crossover with Arrow.  Oh and a Ralph Dibny  (Elongated Man) reference from Dr. Wells giving us more hints at what could be in the future for this show.