The Flash Review: S1E6 – The Flash is Born 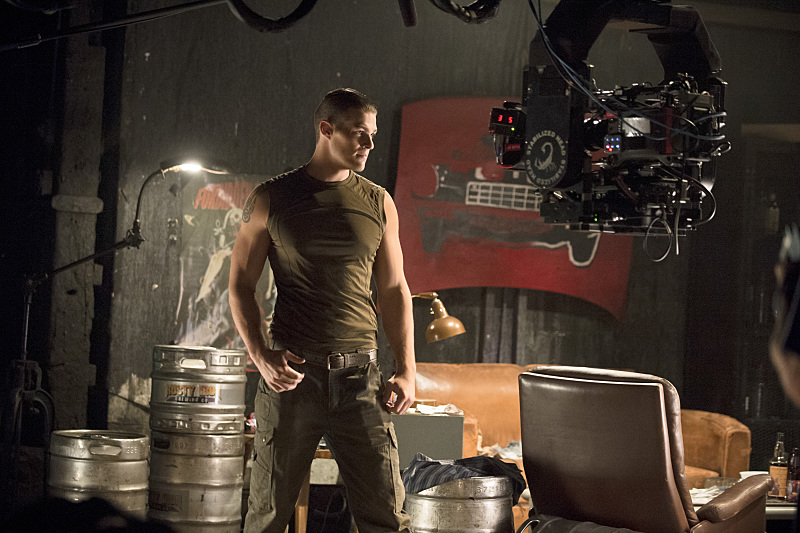 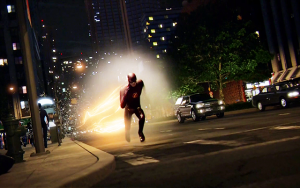 Remember when in Avengers Captain America asked Tony Stark what he would be if you took away all his fancy toys and Stark replied with the greatest “Still better than you” answer of all time?  Well if you take away Barry Allen’s speed what you’re left with is one weak little nerd.  Barry might have to go to Oliver for some hand to hand combat training.  Until then, he better hope he doesn't lose his speed (Or that the promo for next week isn't too permanent).  I’ve been saying this week after week, but I really like how they’re making Barry discover new uses for his powers.  Sure, this week’s villain  (Girder) was ironically weak character-wise when you consider his super power.  I mean Tony Woodward when you think of it is kind of a loser.  The particle accelerator accident gives him the power to turn his body into steel and his plan is to steal a yellow Hummer and some kegs and hide out in an abandoned factory?  As Eddie said, what a tool.  Then later on he kidnaps Iris in some misguided attempt to impress her and get her to write about him instead of “The Streak”(A name that thankfully dies this episode but we’ll talk about that later).  You really couldn’t write a more one-dimensional villain than Tony if you tried.  Yet…it didn’t bother me at all.  See, I’m well aware that this show is still trying to develop the character of Barry Allen and what better way to do that than using some throw away villains?  So yes, with the exception of Captain Cold, the villains on the show have been weak or undeveloped but I believe that’s by design.  Barry needs to first learn how to come to terms with being a hero first before they can flesh out villains, especially with the larger plot hiding in the shadows. 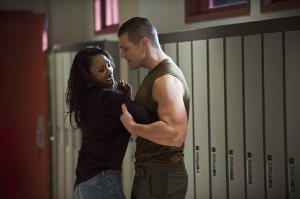 As with most things on this show, they’re moving very fast with this Barry-Iris storyline.  I’m glad they aren’t going to force us into several episodes of Barry and Iris not speaking to each other.  This is another great thing about this show.  Sure it uses some typical tropes, but it seems self aware of this and doesn’t drag them out.  I also enjoyed that Eddie & Barry got some bonding time together too.  I’m not sure if Eddie becomes Professor Zoom or not but after this episode, I actually like the possibility. Why?  Because Barry actually seemed receptive to being friendly with Eddie.  First when Eddie told Barry that he used to get picked on and then there was the scene where Eddie was helping Barry with his punches.  Wouldn’t it be a good mind fuck to have Eddie and Barry become friends and then something happens that leads to Eddie becoming Professor Zoom and an enemy of Barry?  It would be a pretty good twist especially considering how non-threatening and friendly Eddie is now.  We all have our eyes on Wells right now, but wouldn’t this be a nice switch up?

Speaking of eyes on Wells, I was happy at first that Joe was on to Wells not being how he seemed.  But it seems like Wells might have pulled the wool over Joe’s eyes by the end of the episode.  I like that we have two suspects for who Professor Zoom/Reverse Flash could be.  Eddie Thawne is the name of the Reverse Flash in the comics but right now Eddie just doesn’t seem like that guy.  Wells on the other hand seems to be well aware of the future (might even be from there), has killed before, is lying about not being able to walk and the most incriminating thing: After Joe reveals to Wells that he’s looking into the murder of Barry’s mom, Joe gets a “visit” from the Reverse Flash who leaves a message threatening Iris.  With all the evidence pointing to Wells and none at Eddie, here’s my theory:  They’re working together.  Ah yes, didn’t see that coming did you?  What if Eddie Thawne IS the Reverse Flash and is working with Dr. Wells to make sure that Barry got his super powers and to keep Barry alive until a certain point?  Maybe Wells isn’t from the future but Eddie is and Eddie has given Wells certain information.  Why would Wells do this?  Maybe Eddie has promised to go back and help Wells save his wife, Tess Morgan, who we learn about this episode.  I’m just saying guys.  This show has been too good at staying close to the comics.  I have to believe Eddie Thawne is who we think he is from the comics but then it would also explain why Dr. Wells, who honestly seems to care about Barry, has these evil moments.  Something to think about.

Gotta say, I’m shocked they slipped and didn’t have Cisco drop the name ‘Girder’ when talking about Tony.  We did get a “man of steel” though so I will allow that.  While I don’t have any expectations of Superman showing up on this show, I did think that was a nice wink and nod to the fans.  I will say, Cisco’s excitement about Barry breaking the sound of speed is pretty much the same reaction I had.  I like Cisco a lot on this show.  It’s like he represents the nerd in all of us when we watch this show.  Now about that punch.  The effects on this show just keep amazing me.  They just know how to show Barry doing this stuff in the coolest way possible I think its safe to say my reaction can be summed up in the following gifs:

The end of this episode dropped a few more gems on us.  Obviously there was the Reverse Flash showing up which tells us, he’s definitely still around.  But then there was Iris dropping the fact that she’s heard of this man who is on fire but doesn’t burn up.  Looks like we might be getting Firestorm sooner than later.  Also, after 6 episodes, “The Streak” is dead.  We now officially have “The Flash”.  Let’s clap it up for that folks.  Might not seem like much but we’re 3 seasons into Arrow and Oliver is still not called “Green Arrow” yet. How many seasons of Smallville were there while Clark was called “The Blur” (or whatever non-Superman name they were calling him)?  Yeah so I’m gonna celebrate that 6 episodes in we’re getting the Flash called “Flash”.

Weak villain aside, I think this was another solid episode.  There’s so many interesting dynamics and characters on this show.  The fact that I’m now more distrusting of Eddie even though he seemed to be genuine to Barry this episode tells you how good this show is.  Crazy thing, this show is still just introducing Barry and these other characters to us.  Wait until it actually settles down and the larger plot line is revealed.  I can’t wait.