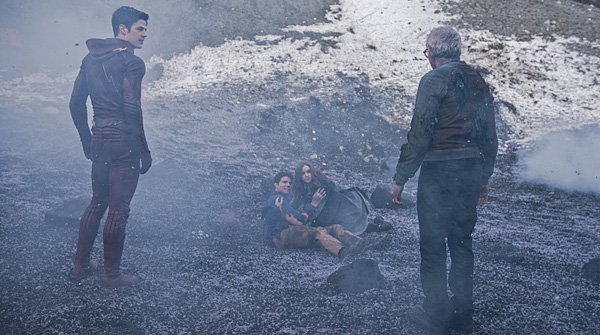 I almost decided to just write “See my last review” for the review of this episode of The Flash because everything I said last week applies doubly this week. This week’s episode was even better and had an even more shocking ending. I don’t even know where to begin with this episode because I feel like it would just be me making more of the same points I’ve made all season. I’m truly in awe at what they’ve been able to accomplish in just this first season. The truly amazing thing is how everything has been brought into this first season and how it all fits. The writers don’t just throw in characters or themes just because they’re cool but because they fit in with a larger story. I remember the shows we used to get growing up.  I remember the original Flash TV show.  It used to be that we had to settle for either good story telling or good effects or faithfulness to the source. Now we’re getting all three at the same time in the same show.  I almost want to cry tears of joy. 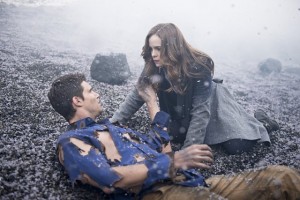 This episode is an A+++. I'd give it more +'s if I could. At this point you already know what I'm going to say but let me try to find some points to pull out and discuss. First off, I love that they went all in on the dual personalities of Firestorm with Professor Stein and Ronnie. This episode picks up right where the last one ended with Barry & Caitlin trying to escape the blast. I was concerned that once Stein and Ronnie split it would be the end of Firestorm but I’m glad they stuck with it. I loved the idea of having Ronnie and Stein merge correctly and fully embrace the fact that they're now forever linked. The Morse code scene in particular was very well done (And pretty graphic when you think about it). Also having Ronnie/Stein leaving Central City because Eiling would still be after them is a good way of not having the city too crowded. We won’t have to worry about the “Where’s Firestorm?” questions if Barry ever gets into trouble. I will say, that shot of Flash & Firestorm “going home” was just flat out awesome and summed up perfectly the geeky feelings I get when I watch this show.  This episode was also surprisingly emotional with the scenes between Stein and his wife as well as Ronnie and Caitlin.  "We love you" was definitely a scene that tugs at the heart strings a bit. 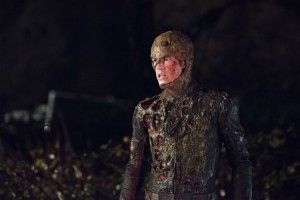 One of the things that keeps this show different from Arrow is that when it comes to friends/family and secrets, everyone is pretty much open and up front (for the most part). Obviously we have Dr. Wells keeping big secrets and Iris is being kept in the dark (Probably not for much longer though), but there’s still a greater sense of openness with this show. Take for instance Joe bringing Barry back to the house to tell him what they found. He was worried about how Barry would react but he also knew that keeping it from him wasn’t a better option (#BlackFatherHoodMomentofTheWeek in case I needed to spell it out). That’s something Oliver is still trying to learn. The interesting part about this is that Barry realizes that his destiny is to fail. Even still, he’s determined to try to use what he knows to try to save his mother. Now I watched Flashpoint Paradox and I also read the comics. It really feels as though this show is setting up for a Flashpoint type Season 2. Of course we don’t have the Justice League in this universe so there would have to be major differences. But think about it, what if they did that and the crossover with Arrow follows in the footsteps of the comics and has Robert Queen as Arrow instead of Oliver? Hey, that’s a long shot I know, but The Flash really has me thinking anything is possible 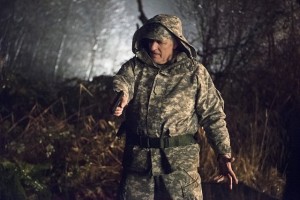 This show has done a very good job of portraying General Eiling as your typical military metahuman hating head honcho. Sure, it’s a one-dimensional character but it’s one that is common in the comic books and fits this character in particular. Two things that stood out to me:

As one-dimensional as he is, I’m hoping we get more of Eiling. Of course the end of this episode calls all that into question. This is how you know Arrow and The Flash are in the same universe, The Flash has picked up the habit of ending it’s episodes on “Holy Shit” moments as well. First off, looks like Wells is behind everything. We get him in costume as the Reverse Flash and unmasking himself in front of General Eiling. While not really shocking because all the signs have pointed to Wells, I still have to applaud them for stretching this out in a way to still leave doubt. I like the fact that I felt the same sense of denial that Barry, Cisco and Caitlin have with Wells.  I didn’t want to believe it was really Wells. Sure, he does his share of dirt but is he that evil that he would kill Barry’s mother? I didn’t want to believe it. This is going to be absolutely gut wrenching to Barry, Cisco and Caitlin when the truth comes out. But they didn’t stop there with this episode. Wells drops Eiling off for Grodd to get his hands on him. Not only did Grodd look even better than the last glimpse of him we got but they hint at him having telepathic abilities. “Not God…Grodd” is going to go down in my Top 3 favorite moments of this television season and that’s a feat considering all the things I’ve loved. My only hope is that Grodd doesn’t kill Eiling. I need more of the metahuman hating general.  Just pause for a minute and think about this:  In ONE episode we got Flash, Firestorm, Reverse Flash and Gorilla Grodd.  If I went back into the past like Barry Allen is destined to do and told my 15 year old self that in 2015 I would be watching a live action TV show with these 4 characters on screen and it didn't look cheesy...I would laugh my older self out of the room.  Such a wonderful time to love this nerd stuff.

One thing I want to take a minute to point out is how much I really enjoy Blake Neely's score for this entire season.  I remember sitting down and talking with him during San Diego Comic Con about it and it's truly amazing.  It's distinct but yet familiar to his score on Arrow.  I love how they both feel like they're in the same musical family but still manage to capture the uniqueness of each show and character.

Another fantastic episode. I like the hints that Iris might not be in the dark much longer. I think it’s in the best interest for the character. I think most of the things that annoy people about her will go away once she’s in on the secret. I only really have two negatives for this episode. After all he did to win her back, I did notice the absence of Linda Park this episode. I mean at least a phone call or something would have been nice. The biggest negative though is…this show is on break until March 17th. Why would they do something so cruel to us?

* I know I’m not the only one who notices that Joe has a key to the house from Sherry now. “Official Police Business” I’m sure.