Last week The Flash pilot hit the ground running (pun intended) and gave us a glimpse of what might become one of the best superhero shows we’ve seen.  I was curious if episode 2 could live up to the pilot and I am happy to say that it absolutely does.  The great thing about this show is that it’s more than just great special effects.

I feel like The Flash has benefited from CW having two seasons of Arrow under their belt.  I think it also benefits from the fact that Barry Allen was first introduced on that show last season.  Fans have already been introduced to Gustin as Barry through 2 episodes on Arrow so we can skip over the warming up period to the character.  They’re not wasting any time moving through this show and I think they know their audience and CW has just gotten better at these kinds of shows.  The Flash  is progressing extremely fast and I actually think it’s a good contrast from Arrow which is a little more of a slow build.  I mean one could say that a show about the fastest man alive can’t be slow but even character development and the typical tropes for this type of show.  For instance, in this second episode, we got both the “You’re not my real dad” and “Barry doesn’t believe in himself enough”…and both were done pretty well.  I liked how they actually melded the two of these together and had Joe be the one to come around and tell Barry that he could stop Multiplex.  First off, usually it takes a few episodes in most shows to get to this point.  But in The Flash they not only did it early but again, it was done well. And this ties into the end of the first episode where they went with the decision to have Joe know that Barry is The Flash.  That means we can avoid a whole season of a good detective like Joe somehow not knowing that Barry is The Flash. 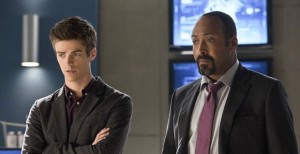 Speaking of the “You’re not my real dad” moment, Jesse L. Martin is proving why I was glad he was cast as Detective West.  Last night he had what might be the first ever “Black Fatherhood Moment” with a black father and a white son on TV.  Martin and Gustin work so well together and have great chemistry.  Of course folks love the action in this show and the effects, but the real emotion shown between Martin & Gustin gives this show more than just the superficial.  I thought they both had great performances and it put a great spin on two tropes that we always see in these shows. 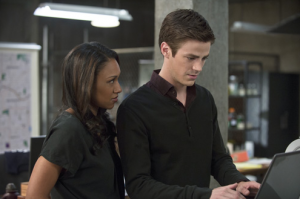 Now having said that, the effects on this show are still amazing.  I’ll be honest, the effects for Barry look better than what they did for Quicksilver in Days of Future Past and I’m looking at Joss Whedon like “yeah dude…you got your work cut out for you.”.  I mean if you grade it on the TV scale, these are the best effects we’ve seen for this kind of show, ever.  Every now and then you can tell they don’t have as big of a budget as a movie but they’re making good with what they have.  The fights between Barry and Muliplex were pretty good, especially the last one.  I love that the effects are more than just “slow down time”.

I’m loving the little things in this show.  While Iris and the city might be calling him the “red streak” we know that eventually he’ll be called The Flash (Professor Wheels dropped the name earlier).  Cisco dropped “Multiplex”.  We even got a look at what might eventually be the cosmic treadmill.  It’s clear they’ve gone full comic book with this show and the nerd in my is loving it. They really GET the Flash and how fast he is.  The scene when he confesses his love for Iris by moving so fast she can’t see or hear him?  That scene was like it was straight out of the panels of a comic book.  Also, I think it was important that they established that Barry fainting was scientific and not because he didn’t “believe” in himself. Most importantly, it make sense. Barry has to make sure he eats a Snickers before going on these runs. 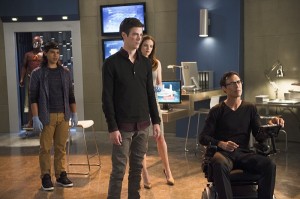 Finally, let’s talk about Professor Wheels (I know it’s Wells but I’m calling him Wheels from now on).  Is he good or is he bad?  The obvious choice is that he’s Professor Zoom/Reverse Flash.  I mean first there was the fact that he’s faking his handicap, then there’s the newspaper from last episode and then this episode he kills a man.  Seems pretty evil to me.  But that seems almost TOO obvious to me at this point.  Don’t get me wrong, I wouldn’t mind it if this turns out true even if I see it coming.  Tom Cavanagh is playing Professor Wells great and if he flips to the darkside, I’m all here for it.  But it could be that this is all a red herring and that Wells is actually here to protect and save Barry (albeit by misguided means).  We know Reverse Flash is coming (it was hard to avoid those set pictures) but we still don’t know who is playing him.  If you’re familiar with the comics then you also know this happy team supporting Barry probably won’t stay happy for long.  Caitlin already shows signs of disagreeing with what Barry is doing and in the comics she becomes Killer Frost.  She also name dropped Ronnie Raymond this episode so I have a feeling we’re going to see her separate more from Barry.  This show has done a good job of taking from the comics and I can’t wait to see what they do going forward.

If I did have a compliant (but not really) it would be that they underused Multiplex.  I'm also not a fan of them killing him off at the end but I think they did leave the door open for him to return.  I mean if he's able to replicate cells, its not that hard to believe he could come back from that fall off the building.  So we'll see.  But this doesn't bother me too much because it's clear this villain was used to move Barry's story forward and get two tropes out of the way.  So, again, its a negative but a small one and a nitpick.

This was an excellent followup episode to the pilot and this show is nothing but fun and win for us fans.