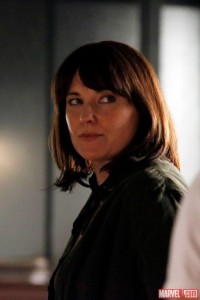 [quote]When "Marvel's Agents of S.H.I.E.L.D." returns for a second season on Tuesday, September 23 at 9:00 p.m. ET on ABC, it'll bring a number of new faces with it...including Lucy Lawless as Agent Isabelle Hartley, and we've got your first look at her in the season premiere![/quote]

I'm looking forward to Lucy Lawless on Agents of SHIELD.  She kills every role I watch her in.  Everyone always shouts "XENA!!!" when her name comes up but she's done so much more than that role and has been amazing in all of them.  I'm half watching Spartacus Blood & Sand as it reairs on the SyFy channel and I'm reminded about how awesome she was on that.  And I loved her on Battlestar Galactica.   After the way Bill Paxton killed his role on Agents of SHIELD last season, I look forward to seeing Lawless and I know it will be just as good.   Can't wait for this show to return.