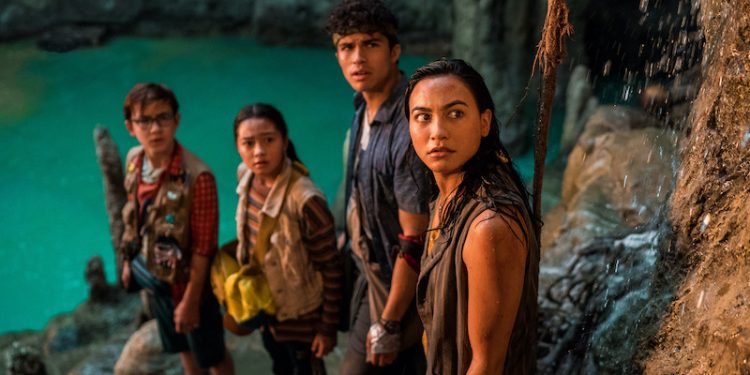 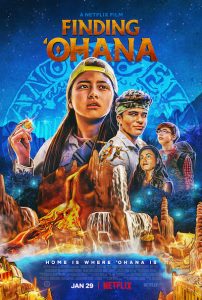 The '80s were a great time to be a kid.  It wasn't great because we weren't in the middle of a global pandemic, but because it was a time when a kid could have an adventure: a straight up-full out-gone from sun up 'til sundown-get dirty-get lost and find your way home adventure! In Finding 'Ohana, writer Christina Strain's first feature debut, that sense of 80's adventure is brought to the present-day in a way that not only honors the genre but brings the characters that would usually be sidekicks and places them front and center, making them the heroes.

Set against the beauty of Hawai'i, Finding 'Ohana follows Pili (newcomer, Kea Peahu) and her older brother, Ioane (or E, as he prefers to be called) as they struggle to reconnect with their Hawaiian roots after living in New York City for the bulk of their lives. They return to the islands after their grandfather Kimo, (Branscombe Richmond) falls ill and their mother, Leilani (Kelly Hu) comes home to care for him. Pili, a geocaching genius, sets out to find a lost pirate treasure after discovering a journal that has been passed down through generations of her family. She and her new friend, Casper (Owen Vaccaro) embark on a treasure hunt, dragging Ioane (Alex Aiono) and Hana (Lindsay Watson) along for the ride.

While this movie is a clear homage to films like The Goonies and Indiana Jones, what makes Finding 'Ohana unique is how deeply the story roots itself in Hawaiian culture and uplifts its Asian-American-Pacific Islander (AAPI) cast. When you see locations like Kualoa Ranch where Hollywood blockbusters like Jurassic Park and LOST were filmed, it's a reminder that all too often when we see these locations, the characters we are following have no connection to the land they stand on. Finding 'Ohana is all about those connections, and there are Hawaiian cultural references and movie Easter eggs sprinkled throughout the film. 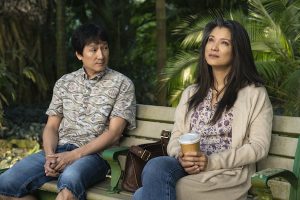 One of the delightful surprises was the casting of Ke Huy Quan, who is most commonly known for his roles as Short Round in Indiana Jones and Data in The Goonies. While those roles are iconic, they're often critiqued for being one-dimensional. Here, Quan plays a family friend and offers a strong, supporting performance with nuance. Similarly, Kelly Hu, who is generally known for her high-action roles in projects like Arrow and X-Men plays Leilani, Pili's widowed mother. Leilani is struggling to overcome her grief and reconnect with her father after abandoning the island for New York following the death of her husband. Hu shines as the beleaguered Leilani who is working hard to hold the threads of her life together.

At its core, Finding 'Ohana is a tale about family and connecting to your roots. Director Jude Weng, making her feature film debut, discovered her own Hawaiian ancestry right before making this film and that informed her direction. While their journey progresses, Pili and Ioane discover that their relationship to the aīna (land) and to each other deepens as they begin to understand what ohana truly means. And though the film is all about the heart of this family, it never skimps on the laughs or the thrills. Finding 'Ohana is a movie you're going to want to watch with your family again and again.