There probably isn’t a movie franchise out there that is more egregious with defying basic scientific laws than the Fast & The Furious franchise. Fate of the Furious is now exception. I imagine that strapping Neil Degrasse Tyson to a chair and forcing him to watch Fate of the Furious while barring him from commenting “That’s not how that works” would be considered cruel and unusual punishment. There’s at least 10 times when you will shake your head and say “Physics doesn’t work that way” and that’s just within the first 10 minutes of the film. 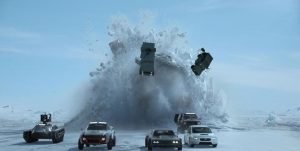 Having said all that, the fact that this franchise is so over-the-top, ridiculous and defies every known law of physics (along with other basics of science and reality) is exactly why fans love this series so much. The opening scene in this movie involves a race in which Dominque Toretto races a falling apart junker car, backwards, while on fire. Later on in the film, Dwayne Johnson punches a dent into the side of a cargo container...with his bare hands. Honestly, for this entire movie Johnson is basically channeling his inner- Black Adam and proving to us all that we really do want to see him as a super-powered villain in the DC cinematic universe.

With Fate of the Furious, it’s time to understand that while this franchise started off about illegal street racing, it has now turned into a 4 billion dollar super hero franchise. That means super hero rules apply.

Everything is in play. To be honest. The most unbelievable thing in this movie that almost took me out was a chase scene down streets in New York. Roads are never that empty. 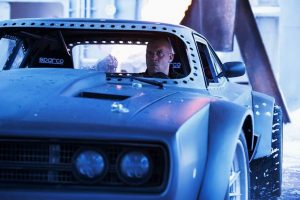 This franchise knows what the audience comes to see and they deliver it better than most. Sure, on the surface this is just a mindless action film. But there’s actually a coherent enough plot and writing that humanizes the characters that it makes a pretty good film. The reason behind why Dom turns on the rest of his team (i.e. his Family) is a pretty good reason and after the initial shock, makes sense with this franchise’s history. Some of the plot points actually serve as a reset for some of the decisions in Furious 7 and seek to change the dynamic of some of the characters moving forward.

Furious 7 was marred by the death of Paul Walker while filming and as expected, it seemed to have a real impact on the cast. Dom and his crew are super heroes, no different from the Avengers and Justice League. And like those movies, the casts become close. Losing Paul Walker wasn’t just losing a coworker, it was losing a friend and a brother. It was obvious the cast was still grieving the loss and it impacted the cohesiveness of the film.

Fate of the Furious seems to have the cast back to having fun again. They haven’t forgotten Walker, but instead seem intent on making the movie that celebrates the legacy started by him and Vin Diesel.

The weakest part of this franchise has always been the acting. This movie is no exception. The worst offenders are still Vin Diesel and Michelle Rodriguez, particularly when they’re tasked with having emotional scenes together. I call it “Dom & Letty Face”. This is when Vin Diesel and Rodriguez try to convey emotional gut wrenching scenes between Dom & Letty by only giving each other really weird and pained looks. It’s pretty bad. In one scene (minus Rodriquez), Vin Diesel gives the world’s worst impression of the Denzel “Glory Tear”. Part of me thinks the problem stems from them overplaying the hardness of their characters. Seems like no matter what the emotional range of the scene is, they always play the characters the same, minus some attempts at showing that emotion with facial gestures. The result is usually just comedy and not the desired result. 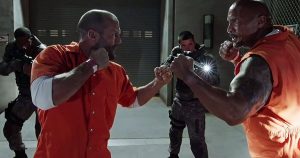 The good news is, unlike the last two movies, there are less scenes involving these serious attempts at acting. Instead we get mostly great pairings of characters that work well off each other. Dwayne Johnson and Jason Statham have an ongoing back and forth throughout this film that is hilarious. We also get plenty of Jason Statham being Jason Statham with a hilarious but action packed sequence involving Statham kicking ass while carrying a very important package.

Obviously the back and forth between Tyrese and Ludacris continues to be a source of comedy. Like last film, Kurt Russell isn't in this film much but he pops up at the right moments to add sarcasm. Nathelie Emmanuel is given slightly more to do this film and they don't relegate her to just being eye candy for Roman & Tej to fight over.

There are a ton of surprises in this movie (particularly if you weren’t paying attention to any casting news that might have leaked). You’ll see some new faces as well as some old ones and they’re all welcomed. 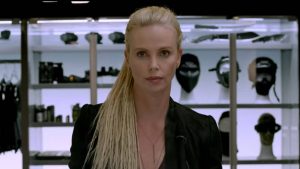 Charlize Theron is a huge catch for this franchise. Getting an actor that can carry scenes off acting alone is something this series has never really had before and it makes a difference. Her character, Cipher, has a bit of a confusing motive for what she's doing but that is completely overshadowed by Theron's performance and how she makes your skin crawl with how blunt and ruthless she is. Beyond the ridiculousness of her hacking abilities she has several scenes with Vin Diesel where she’s so captivating you forget he’s even in the scene. There’s something about how after seven movies, it takes a woman to finally put Dom in his place that is just beautiful to watch.

I have a soft spot for this franchise. In a Hollywood that catches heat (rightfully) for the lack of diversity when it comes to both in front and behind the camera, the Fast & Furious series is one that is surprisingly ahead of the curve. You have a cast that has more people of color than most other franchises (including the MCU and DCEU) and seven out of eight directors have been men of color. Of course there’s room to improve (I would love for a woman of color to get a crack at this franchise) but that’s pretty impressive in a time when Hollywood is struggling to justify the lack of color in their movies. This is a franchise that even before Fate of the Furious has a box office of just under 4 billion dollars. And even better, the movies actually get pretty good critical praise.

This is my second favorite movie in the franchise after Fast 6. I don't think they'll ever top that the 6th in the franchise for me but this was entertaining enough that I'll definitely be back for the next one.