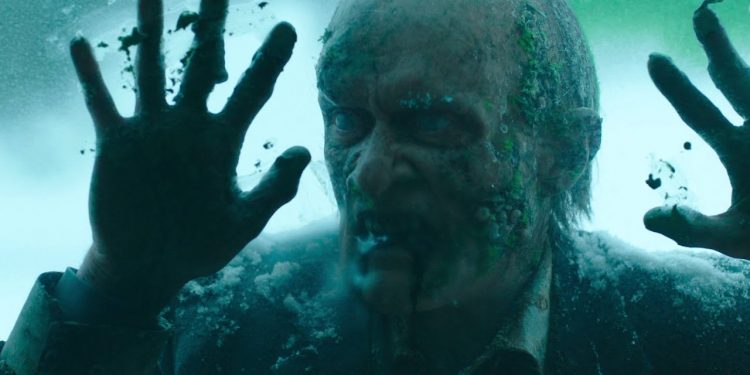 Long time zombie fans will tell you that using zombie outbreaks as a jumping off point for socio-political commentary is a genre staple. At least the one willing to admit George A Romero never made a single zombie film in a vacuum will. Although recent zombiefare tends to be less overt, blending comedy into an apocalyptic happenings is definitely a trend on the rise...again. Brain Freeze, 25th Fantasia Fest's opening night film, offered audiences just such a broad satire.

Set in Quebec, Brain Freeze leans into the zombie outbreak in an isolated community trope for it's central crisis. But unlike in many outbreak scenarios, this story isn't a globe-trotting race for a cure or to isolate patient zero. Instead, director and co-writer Julien Knafo uses this outbreak to take broad swipes at a range of issues like, polluting, xenophobia, classism, poor crisis management by governments, and misinformation campaigns.

It's the middle of winter on Peacock Island and the owners of the local country club see a moneymaking opportunity in being able to offer its affluent members the ability to play golf year round. Naturally, there's a company with a brand new fertilizer designed to grow grass in even the most challenging of conditions. Of course, this experimental chemical got into the water supply. Soon the island community's inhabitants are a bizarre new breed of zombie.

Brain Freeze centers to unlikely zombie apocalypse companions. André (Iani Bédard), the often too on-the-nose embodiment of a disaffected youth, and Dan (Roy Dupuis) a doomsday-prepping security guard.  The dynamic between the too make space for some low-key witty moments with a subtext juxtaposing the different ways neither is exactly the optimal traveling companion in a city overrun with zombies.  André's self-involved obliviousness is both a boon and a curse. While Dan's anti-establishment tendencies cause him to vital clues and dismiss André out of hand. And here's were the story hits its stride because the journey is fraught yet full of out of pocket humor.

In the midst of all this push and pull lies an unexpectedly fun romp as this strange duo attempt to avoid zombification while searching to clues to share with the outside world in hopes of a cure. But beyond the humor and ideologies battling it out in the subtext, Brain Freeze lacks cohesion. Knafo and co-writer Jean Barbe include too many topics to this a social satire. There's an actually sinister storyline lurking just beneath the camp that's repeatedly underserved. So, while the cast give engaging performances and the film balances the ridiculous rather well; ultimately it underwhelms.

Come for the creepy, stay to find out what happens to that damn baby...

Listen as Kris and I discuss the humorous highs and lows of Brain Freeze as well as the dangers of having too many moving targets when it comes to blending in biting social commentary.