Eternals Flies too Close to the Sun 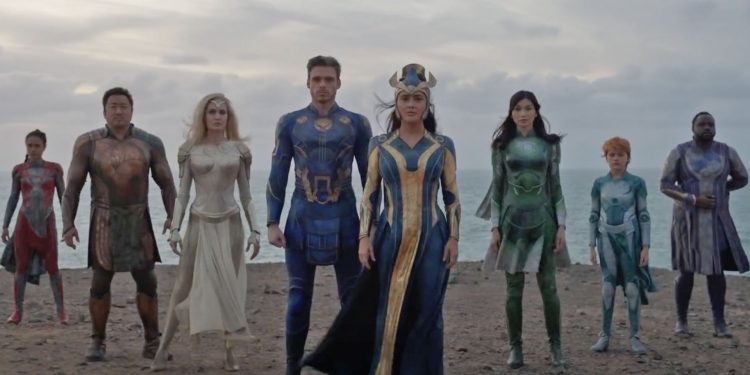 Kriss7
Ro7
7
One of the things that has made the Marvel Cinematic Universe so successful is how accessible the movies are. Kevin Feige has managed to balance telling comic accurate stories that please existing fans and comic readers while also making the films still make sense to newcomers. It’s one of the most amazing feats of the franchise. And with that they’ve been able to get weirder and bigger and more out there each year. The problem is while Eternals definitely goes big, it also leaves the audience behind a bit. Even the after credit scenes, a staple of Marvel films, are super deep cuts to the lore that are going to leave the average fan wondering “what?”
That’s not to say this is a bad film. No, there is a lot to like about Eternals. Chloé Zhao’s signature is all over this film. Visually, it is absolutely stunning. If there was any concern about Zhao making the journey into shooting big action scenes, Eternals should put that to rest. The action scenes are fantastic and are probably some of the best the MCU has done in a while.
The cast is also fantastic for the most part. Richard Madden’s Ikaris is basically what if Superman wasn’t a boy scout and didn’t have a cape. Lauren Ridloff’s Makkari is probably the best visualization of a speedster that either Marvel or DC has done on screen. But beyond just the use of their powers, the actors themselves are great in the roles Angelina Jolie does a great job as Thena. She’s not the lead in this film and doesn’t overshadow the rest of the cast but still plays her part and role perfectly.
Salma Hayek is the one cast member that could be replaced without feeling like something is lost. She’s not bad but also doesn’t stand out. Some of the biggest problems with the film revolve around her scenes as well as the editing for her scenes seem to be what really drag this film out. The editing of doesn’t Eternals any justice. There are definitely times where audiences will questions why things were cut and placed the way they are. The script struggles to tell its big story without getting lost in it. At times it feels like the film lingers too long in some areas but not enough in others. It's a very weird and frustrating feeling for a film that breaks 2 hours and 30 minutes in runtimes. Eternals could have used the Guardians of the Galaxy Vol 1 treatment, where the story is made a big smaller in order to introduce the characters and waited for a second film to get deeper. Instead the film tries to do a lot in one sitting and the result is too many loose ends. Of course this is the MCU and so those threads will be followed up eventually, but it leaves this film feeling incomplete.
The biggest let down in Eternals is the end. This is where it feels like Marvel Studios failed to heed the tail of Icarus (or should I say Ikaris) and flew too close to the sun. As mentioned before, one of the greatest things Marvel Studios has done is craft stories that take the audience along with them. But in Eternals the audience is clearly left behind. There’s so much going on that needs to be explored and just isn’t. The only reason this isn’t a completely catastrophic shortcoming is that we know that Marvel Studios isn’t abandoning the story any time soon so at some point we will get answers. But the result is a film that just feels like it ends just when it was getting good.
It's fitting timing with Eternals coming out shortly after WB’s Dune. There are a lot of similarities between the two, especially when it comes to where they fall short. Both are visually pleasing and will work very well for their own niche, super hardcore fanbases. But both seem to have forgotten that adaptations work best when you have something for everyone. Yes, you want fan service but you also need to not go so deep you lose a new audience.
At the end of the day, Eternals is still worth watching. But when judging it against other Marvel offerings, it's clear that changes will need to be made in the next film to get up to the standards audiences expect.
Like what you hear? Subscribe so you don't miss an episode!