Dual – Never Have Yourself Cloned 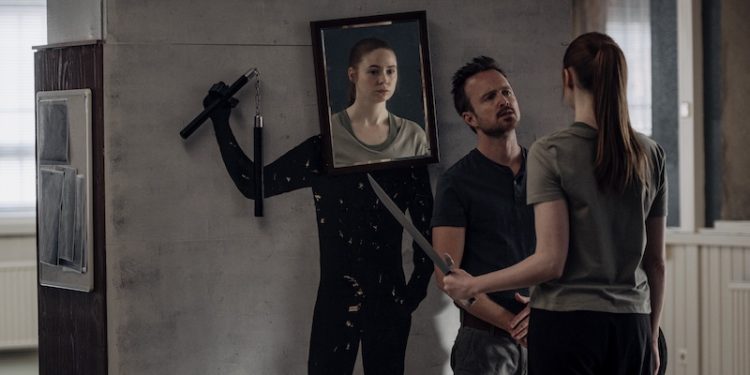 Riley Stearns' Dual crams a lot into 95 minutes but never feels overstuffed. It's listed as a Sci-Fi Thriller but is also pulls off a dry sense of humor really well thanks to lead Karen Gillan. Its biggest accomplishment is providing meta, societal commentary without ever feeling overly pretentious or preachy.

The plot of the movie is very simple. Sarah (Gillan) is living a very depressing and unfulfilled life when she is diagnosed with a terminal illness. To ease the transition for her mother, she opts for the Replacement program that allows dying people to clone themselves so that their clone can continue on with their life. The problem is...Sarah makes a miraculous recovery and is no longer dying. By law her clone has the right to not be "decommissioned" and the way this is handled is by a televised duel to the death where the winner gets to live on as Sarah. This movie is less about some Hunger Games style duel and more about what it means to live a life. Stearns could have made this film really boring and uninteresting  but instead uses awkward situations with hilarious dialogue to make this film a joy to watch.

Gillan works well as Sarah (and Sarah's Double). Her last few films have had her really lean into her deadpan expressions and humor and its worked very well for each film. In this one, she's acting against herself in many cases and that just makes it even more impressive. It helps that her character is also very unlikeable. There are times when you start wanting to root for her double as you come to the realization that Sarah kinda sucks.

Dual definitely is worth checking out. Again, despite the opening, don't expect some action-heavy scenes like Hunger Games or Battle Royale. It's definitely not that kind of film.