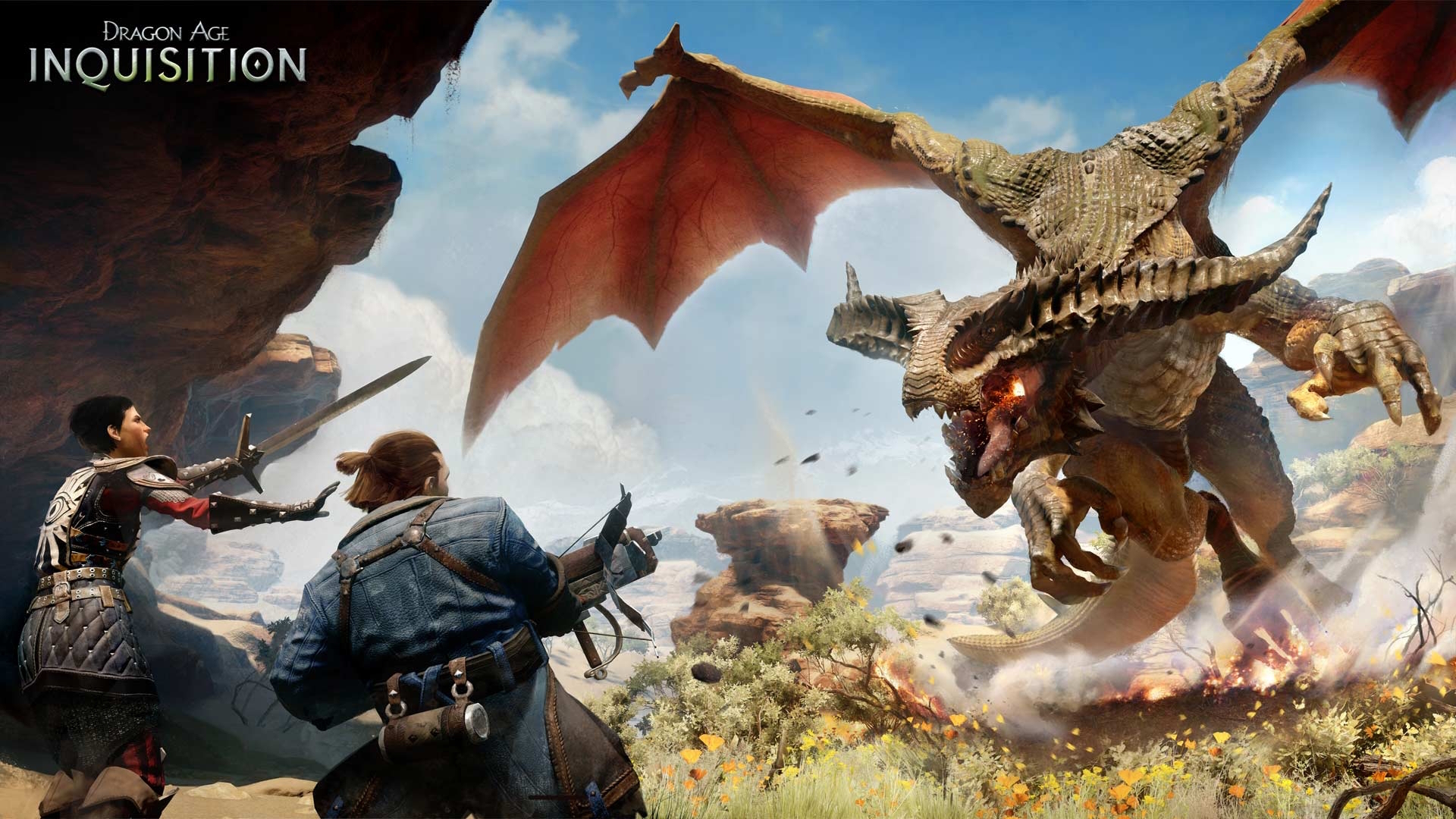 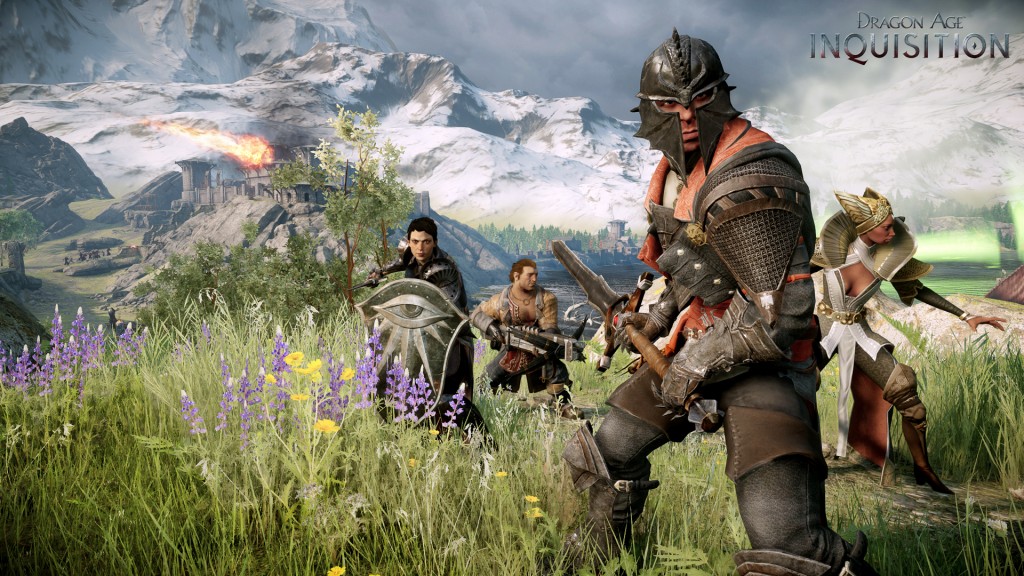 What became of the Grey Warden order after the events in Dragon Age: Origins?

What happened to the Champion of Kirkwall after the events in Dragon Age 2?

These questions are answered in Dragon Age: Inquisition, brought to us by Bioware and EA Games. Set a few months after the end of events in Dragon Age 2, Inquisition follows the path of your character who stumbles into a vast conspiracy and becomes the accidental leader of the Inquisition, tasked with discovering source of the evil putting events into motion that threaten to swallow the entire world.

Dragon Age as a franchise has a beautiful story to tell. Origins gave you the story of the Grey Wardens, a faltering order in Thedas who existed to stem the tide of the Blight. In Origins, we get a sense of the background of the Mages and Templars and their relationship. Dragon Age 2 takes place in a slightly parallel timeline to Origins. DA2 opens with events that take place at the end of one of the first acts of Origins, but takes you to a different part of Thedas and the events taking place there as it relates to the the growing conflit between the Mages and Templars. 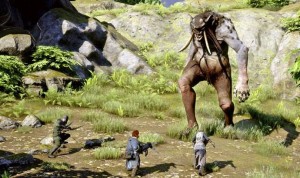 Inquisition picks up the aftermath of the events that led to the finale of Dragon Age 2 and the fallout from those events. Divine Justinia, the religious leader of Thedas, has called a conclave to settle the dispute between the Templars and Mages. An explosion rocks the location, and you are found passed out at the site amid the charred bodies of the other attendees. Witnesses indicate that you walked out of the Fade, and a woman, a heavenly being, was seen behind you, as though sending you back and sparing your life. Initially, you are thought to have caused the explosion, which has created the Breach, a massive tear in the Veil that blankets the sky. When you regain consciousness, you find yourself being questioned regarding your role in the events. You also find that you have a mystical energy in your hand, which later proves useful in closing Fade Rifts, small tears in the Veil caused by the Breach where demons can come into the real world without possessing a body. You slowly gain the grudging trust of your interrogators, who determine that given the death of the Divine and the threat the Breach imposes, an Inquisition must be formed. The Inquisition seeks allies from across Thedas to assist in supporting the efforts to close the Breach and discover who is ultimately responsible for the death of the Divine. Inquisition brings back what fans of the franchise loved most about the first game, and that is the ability to play as different racial groups. Your racial background and your specialization not only determines your backstory and some side missions available to you, but also determines the ease with which you are able to complete some missions. 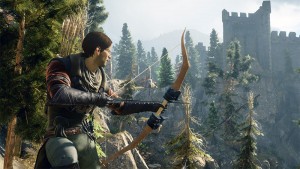 Inquisition tells a wonderful story, although I have to admit that Bioware still hasn’t figured out how to “capture it all” the way they were able to with Mass Effect. The story is wonderful and the open world concept, very reminiscent of EA’s Kingdoms of Amalur: Reckoning, makes for an enjoyable experience. However, some of the things that made Origins and Dragon Age 2 magical are missing, and it seems in partnering with EA on this chapter of the Dragon Age Saga, they failed to incorporate those pieces into the game. One of the joys of playing Origins and Dragon Age 2 were the side conversations and party banner that took place as you were traveling from location to location. The banter served to illustrate this group of rag tag characters joining up to fight a common foe and developing as a team. While there is some banter in Inquisition, it is drastically reduced.  You have to develop the right combination of a party to even get a quarter of the party banter you got in the first two games. 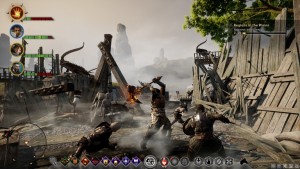 Another challenge to the story is the failure of Bioware to remember its’ own history at times. There is a key decision you can make in Origins that will impact how a beloved character reappears in Inquisition-however, if you make the decision, individual Origins characters that appear pretend as though they do not know each other well enough to know of the decision. Given how the party traveled together in Origins, it is completely implausible for them to react to each other this way.
Inquisition was developed on the Frostbite Engine, and it creates a beautiful tapestry upon which the game is played. That said, there are some challenges with rendering that appear, and glitches that can be annoying. A few glitches can be downright devastating if you have put in a large amount of time in a task. Another complaint that seems to transcend platform generations is load times between cut scenes.  While updates have reduced some of these wait times (which at one point were as long as 3 minutes), for a game developed on advanced engine, it seems a bit of a stretch to accept this load time as a compromise during game play.

The fight controls are vastly improved over the first two games, and include the use of the right trigger on the Xbox controller for regular attacks, freeing up your other buttons for specialized attacks.  In the age of first person shooters, it feels more intuitive to use the right trigger as opposed to the buttons for a standard attack. The left trigger allows a second tier of options, and Inquisition adds the use of the right button for additional attacks, making it a more versatile way to play and battle. 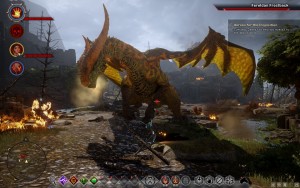 As with any Bioware RPG, there are side quests, and while some of them seem like busy work, they open up opportunities for additional missions, the gaining of XP to advance your character’s abilities, and a system called “Inquisition Perks”, which provides the ability to strengthen your character’s reach and influence in the game. While it is less cumbersome than the level up options required for Origins and DA2 (for example, having to earn so many points just to be able to pick a decent lock), it is also challenging because the perks open up gameplay options that can help you advance your mission and gain achievements.

That said, Inquisition removed some of what worked well for your party members in Origins and DA2.  In the first two games, you could set up tactics and behaviors for your team. For example, you could level up a mage in a specialization that meant that they would deal party damage, but if they noticed a member’s health being low, the AI would use one of their abilities to restore either a character’s or an entire party’s health. You could set up a warrior to be an aggressive attacker or a defender of the party.  These abilities are lost in Inquisition. While you can level up a mage to revive a party member, they will not do it intuitively. You have to switch to that character and do it for them. On the flip side, a new addition that makes this game a standout from its’ predecessors is the ability to craft your own armor and weapons. Unlike the first two games, where you had to finish advanced storyline quests to get superior armor, recruiting a member for your Inquisition team allows you to create armors and weapons vastly superior to anything you find looting your vanquished enemies.

Also new to Dragon Age is the ability for online multiplayer gameplay, which from a story perspective is strong, but from a gameplay and graphics perspective is the weakest part of this game.  The online server glitches out often, which results in you either being frozen and unable to play, or being kicked randomly in the middle of a match. 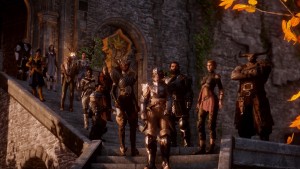 The first two games in the Dragon Age series were scored by Inon Zur. The creators decided to go in a different direction and Inquisition is scored by Trevor Morris. Morris created a score that is beautiful for the game being played, but could have easily been created for a motion picture as well and draws the listener into the action and the story. The themes are sweeping and epic, and really draw you into the story and the action deeper.

Overall, Bioware has done it again delivering a game that tells a wonderful story and draws the player into the character they become. The glitches in single player, while troublesome given the technology used to create the game, are not insurmountable to enjoying the game-I am currently on my fifth playthrough if that is any indicator. Hopefully any new patch updates will resolve the graphics issues present in the multiplayer area of the game.