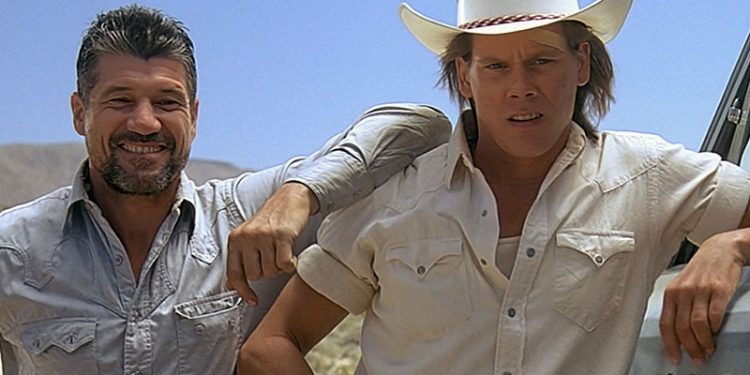 THR is reporting the great news in the world: Tremors is coming back!

Kevin Bacon is returning to work with David Schiff and Blumhouse Television to reboot Tremors for the SyFy Network. Syfy has picked up a pilot for the series. This is the second attempt at a Tremors TV show for Syfy. Back in 2003, a single 13-episode season aired but failed to gain foot. Lots has changed since 2003. First, Syfy has had some GREAT television series since then. Matter of fact, my favorite Sci-Fi shows are all on SyFy (The Expanse, Dark Matter, etc). Second, Kevin Bacon returning. Bacon’s Valentine McKee hasn’t been in any of the subsequent sequels and TV adaption attempts since the original film back in 1990. Bacon was at the Edinburgh International Film Festival this past weekend and had this to say about returning:

“This is the only character I've played that I've ever thought about revisiting. I just got to thinking, where would this guy end up after 25 years?” Bacon said Monday in a Syfy release announcing the pilot pickup. "Andrew Miller has a fantastic take on it and we hope to create a show that will be fun and scary for fans of the movie and folks that have yet to discover it. Let's kick some Graboid ass!”

It also seems like this attempt at a reboot will embrace the cult classic nature of the original:

"We are doubling down and embracing this core [fanboy] audience. With Syfy as a name, we want to own the genre," Chris McCumber, president of entertainment networks at NBCUniversal Cable Entertainment, told The Hollywood Reporter in May. "We have to create a home and universe for fans to come and celebrate the genre they love. That's why we're opening this up and building the network around those passionate fans. We are the only TV network whose only mission is to live and breathe science fiction 24/7."

My only question is: Will Michael Gross return? On IMDB he’s currently listed as filming Tremors 6. As the only person from the original film to continue the Tremors tradition, I feel as though Gross HAS to be in this TV series, even if it’s just for a cameo. It would be only right.

To get the full appreciation for my love of Tremors, sign up for a Premium account and listen to our Nostalgia Review of the entire Tremor franchise (even Tremors 5).