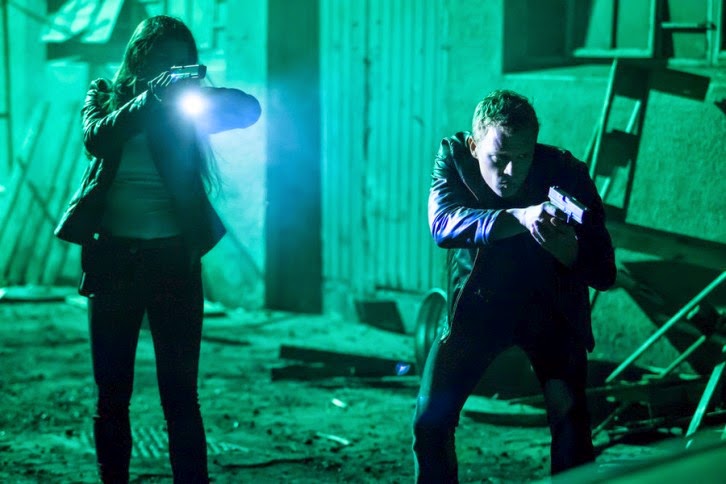 Well...they really did it. Poor little Bigsby was killed last episode. I'm impressed. I didn't think the character was that annoying but Vega really isn't any place for a kid. This episode didn't seem like much at first but as I sat down and wrote about it, I realized how good it was. There's a lot of things at work in this episode as more of the dirt some of the major players are hiding start to show. Anthony Head continues to be the standout star of this show but Luke Allen-Gale (William Whele) has been impressing me as of late. He's playing William as this weak, love struck kid who no one takes seriously but is actually showing glimpses of being his father when no one is looking. I'm also loving that Claire Riesen is being given a purpose on this show more than just the "prize" in a love triangle. There's a lot going on in this episode and it really comes together at the end with a "Holy shit" moment.

It's about the Wives - Real Housewives of Vega 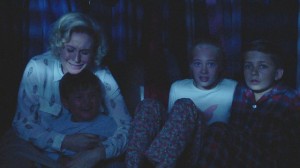 It didn't hit me until I started writing this, but this episode really begins and ends with a glimpse into how the deaths of the wives of David Whele and General Riesen changed them. The opening sequence that showed what happened to David's wife and family was intense. It actually explains a lot about not only David but his relationship with his son William. We know that David used to be a Televangelist before the war and now he's completely without faith. Well now we know why. Not only was his wife killed in front of him by Angels but it looks like he had another son and daughter that were taken.  Not only that but it was the crying of the youngest son that revealed their hiding location.  And that son?  William.    And so William was left to be raised by his now jaded father and it explains a lot about their relationship.  Clearly David blames William for what happened.  It explains so much about their relationship and why David views William as weak.  It also brings up an interesting question:  What happened to the other Whele children?  Why were they taken?  Where Angels rounding up children at one time who they thought were the right age to be the "Chosen One"?  And what did they do with them once they were revealed not to be?  I have a feeling those kids will be reappearing on this show.

And now we have General Riesen. I found it weird how after they introduced this angel lover of his (Clementine), that they never really explained who she was and why the General had this soft spot for her. It wasn't until the very end of the episode that I had the "Holy Shit" moment. It's moments like this that make me love giving TV Shows a chance even when I'm not sure where they're going. Even in this episode, they purposely went out of the way to be obscure with who the Clementine was and why the General was risking everything. I found it odd but stuck it out. Even at the end, they never actually said who she was, you just see the painting of the Riesen family. This was huge. It's clear now that General Riesen was trying to hold onto his old life but now that he's dying, he's trying to cut ties.  The reveal made me rethink how I was feeling about the previous scenes.  It just wasn't making sense to me.  I didn't know why Clementine thought Claire might be able to take care of her.  I didn't know why she showed up in Claire's room and was trying to leave her a gift.  But once the end of the episode hit, everything made sense.  That's the beauty of a TV Show.

I knew there was a prior relationship between Sgt. Noma Walker and Alex. Something about their interactions in previous episodes told me there was something more there than just friendship. I'm going to be honest, I like their chemistry more than Alex's chemistry with Claire. I don't know where this show is going to go in terms of romances but I would like to see more of Alex/Noma versus Alex & Claire. My reason for that is, after the events of this episode, I'm just not sure if Alex & Claire are the right dynamic for this show. Also it really seems like Noma still loves Alex (and that the feeling is mutual). Their relationship ended because Noma wanted to protect Alex, not because she didn't care for him. 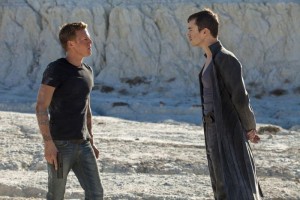 One of the things I've found so interesting about Dominion is how flawed the Angels are. As much as they give off this appearance of being above it all, they suffer from the same flaws as humanity. Those that side with Gabriel seem to be almost childish in the way they react to humanity taking the attention of God away from them. With Michael though, his cold demeanor is almost over compensation. He's like a man who tries to close himself off from emotion when that only means when he does give in, it's even worse. First we have him trying to train Alex and he's doing so by basically being an asshole. It's like he hasn't realized that treating Alex like a child isn't going to work. Sure, Alex is stubborn and hardheaded but that's Michael's fault. He told Jeep to leave Alex then Michael didn't even help Alex in Jeep's absence (at least not directly). He basically left Alex to fend for himself and now Alex has grown to be bitter and cut off from wanting to accept help or learn from anyone. And that's understandable. If Michael's not careful his coldness is going to do exactly what Gabriel wants which is send Alex straight to the other side.  Bringing up Bigsby was a low blow even for Michael.  He had to know that was too far. 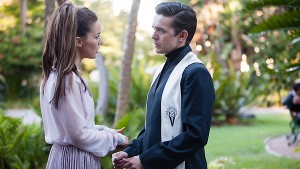 Claire and William aren't the docile, pawns for their parents that they appeared to be. I think I've been underestimating William. He is devoted to his religion and while that puts him at stark contrast with his father, he's got a bit of a backbone. And he can switch his demeanor on a dime. The way he handled the Brother Paul showed just how real William can get when necessary. The more I think of it, Gabriel wouldn't trust William the way he does if William was the weakling his father thinks he is. The scene with David & William in David's study was so good. It revealed David's motives in that he really believes that once the marriage is over, he'll be the one running things in the background with Claire & William as figure heads. Hell, I think David believes Claire is actually stronger than William and has completely written off his son. But William had that "I am the man I am because of you father" line where he grabbed David and kissed him on the forehead in a not so subtle notice to his father that he's more like his father than he's being given credit for.

Then there's Claire. David is underestimating not only his son but his soon to be daughter-in-law. It's clear that David's whole reason for supporting this marriage is because he believes his son and Claire would be easy to control. I'm glad the character of Claire is not being written as just some easy to control, naive love interest. I like the idea that Claire is more accepting of the role she's being thrust than Alex. While Alex spent so much time running away from the responsibility of trying to protect and save Vega, Claire is willing to sacrifice her own happiness for the betterment of the people. She first tried to play William to give her dirt on his father and when she realized that it wasn't going to work, she went after David on her own. She's clearly playing with fire here but I think she knows that. This is the second time a woman has gotten the better of David and I know he's not going to be happy about that.

This was another good solid episode. This series is slowly fleshing out these characters and giving you more background. It's going to be interesting seeing how Alex deals with this 8-ball that is possessing the body of Claire's mother. And what does this mean for the General? Seems like all the "ruling" class now has dirt on each other. It's like a Mexican standoff right now and it'll be interesting to see who shoots first.