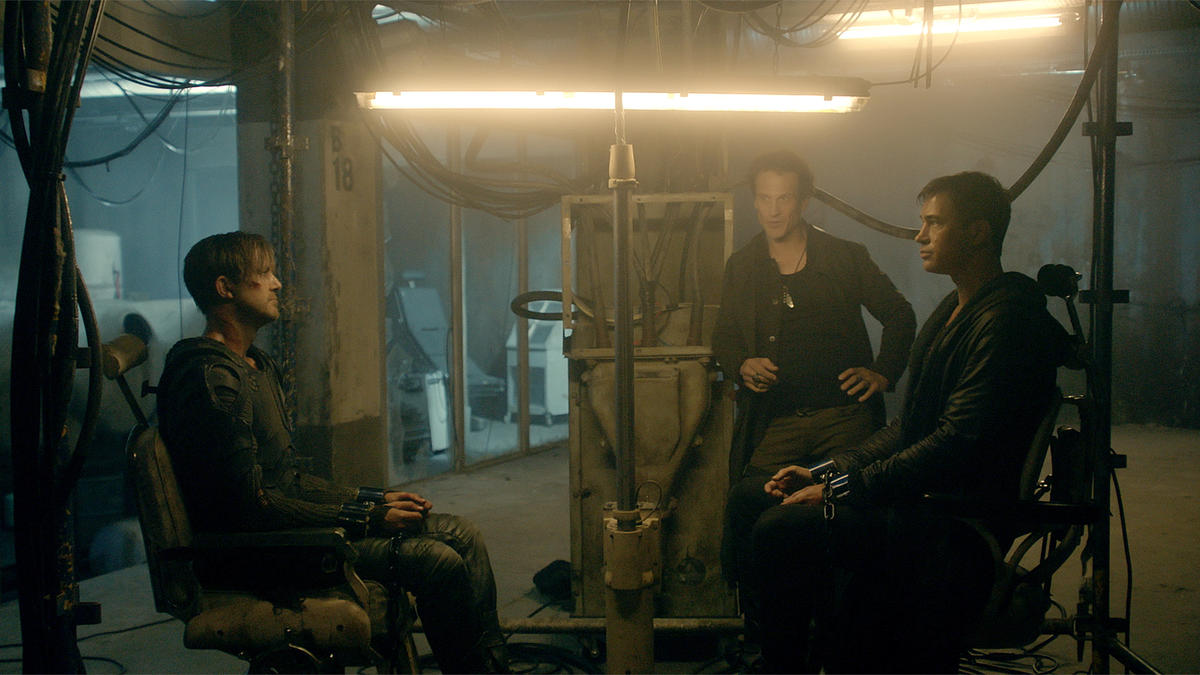 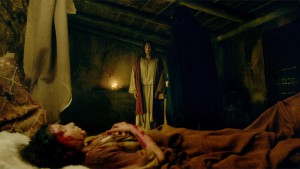 I have no idea where the story is going to leave our characters this season on Dominion but I’m enjoying the ride none the less. Lay Thee Before Kings continues to expand and evolve the character of Gabriel. It’s been fascinating to watch when you consider how much of a villain Gabriel was in season one (and technically still is). What’s worked so well for the development of Gabriel is that he hasn’t really changed from what he was in season one. Instead of trying to redeem Gabriel this season, they’ve just given us glimpses of his past which explain how he’s gotten to the point he’s at. These scenes have humanized Gabriel in a way that makes you almost sympathetic to his motives now. The David and Goliath flashback scenes were great. We get to see Gabriel as a loving father and protector only to watch the jealousy of a King take his son from him and put an imposter in his place. So it becomes clear why Gabriel is the way he is and honestly, its hard to find fault in that. He’s still loyal to his brother and family despite their disagreements. When he made the sacrifice so that Michael could be free, it felt less of a “okay, I’ll come onto your side and do it your way” and more like he knew that Alex is Michael’s David and he knows that this is a journey that Michael has to go on. He’s still doesn’t believe in Alex and when he gets free (when, not if) he’s going to be right there opposing Michael & Alex. I guess it’s less of a growth of the character and more just fleshing him out and make him more understandable. I love his last line to Michael before he closed the door that he couldn’t come with him, he still had to kill Julian.

Speaking of Julian, I'm convinced he's planning something big for General Riesen. He seems to have a soft spot for the General and there's really no reason for it. Sure, he's asking the General where the amphora is but, I think he knows the General has no clue where it is.  He's now brought back the angel that possessed his wife Clementine. Again, what's his angle? Personally I think he's trying to soften the General up to become a dyad. The General is dying and Julian can extend his life by having him become possessed by another disembodied higher angel (I refuse to believe Lyrae was the only one). If the General agrees and this could also protect him from an eviction since an eviction only works if the human wants it to. Waiting to see how this develops. 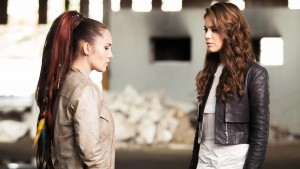 So one thing that’s been bothering me recently with TV shows is how stupid some of the characters are. It’s been a huge issue with me and The Strain. I like the show but the writing of the characters has become lazy and is writing them doing stupid things just to set up conflict. I had a HUGE problem with the 90 minute pilot for Fear the Walking Dead because of the basic stupidity of the characters (No one in their right mind goes into a drug house at night unless they’re looking to score drugs). I think I’ve just gotten tired of characters doing things that are just unbelievably stupid for no reason. I bring this up because I’ve been enjoying how the majority of the characters on Dominion DON’T fall into this category. First there’s Zoe. End of last week she shot David because she knows he can’t be trusted. She was pretty much establishing that she’s not going to let David manipulate her and that she knows he can’t be trusted. It’s the story of the Scorpion and the Frog. End of the day, David Whele is still David Whele and he will betray anyone he needs to because it’s in his nature. Zoe recognized that and isn’t falling for it and I love that. At the end of this episode, she picks up pretty quickly who was paid to shoot Claire and that David was behind it. This is great because it makes the character better. If she was to just be super naive and believe David despite the fact that his whole existence is to lie and work out a deal for himself, it would not only be a disappointment but it would make her character boring.

Despite being thrust into a situation she’s not really prepared for, Claire has been doing pretty well as Lady of the City. She has a better grasp of the issues than her father or David ever really did. She realized something pretty quickly that I said in my previous reviews, that Zoe would be a great ally for her instead of a foe. And Zoe agreed. Now of course Claire getting shot is going to put a damper on that but again, in sticking with the theme of characters being smart, Gates didn’t fall for the bullshit either. He told Arika that Zoe was just as shocked by the gun fire as they were and that she wasn’t behind the shooting. To take it a step further, Gates also is highly suspicious of Arika (she’s the only one in the room without proper vetting or clearance). I have to be honest, that’s refreshing to me. I get tired of seeing shows where they rely on the characters missing obvious signs and being dumb in order to move the plot forward. I expect a certain level of “dumbness” but it really does start to become annoying when characters continually do the same dumb things over and over again. And maybe “smart” is at the wrong word. I think I’m looking more for common sense and logical thinking. You can be smart and absent minded. But I don’t think you can lead a revolution like Zoe or run  city like Claire and be a fool. This show also wrapped up a small carryover issue from last season: Claire's pregnancy. The question now is, how does Claire react. Does she blame Zoe and now rescind the offer of peace or does she move forward with the best plan to unite the city? 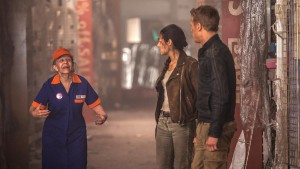 Right now the dumbest character on the show is the chosen one, Alex. But the show doesn’t shy away from that. A lot of times characters are telling Alex how stupid his plans are. Hell, Noma is basically his guardian angel telling him “Dude…this isn’t a smart idea.” The whole trip to “8Ball Costco” while necessary to help Noma, was going to end the way we all thought it would. Truth is, Alex being “stupid” about things makes a lot of sense. Here’s a guy who was abandoned as a kid, got picked on and had a rough life and had to scrape for everything in life. Truth is Alex’s “dumb moments” come from the fact that he’s been thrust into a position of being a savior yet no one knows what he’s supposed to do. So while he has guides in Noma and Michael, he’s flying blind. But again, you feel almost sorry for him because even he knows he’s in over his head. 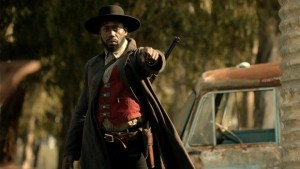 I felt that the “8Ball Costco” trip felt a little out of place compared to the rest of the episode. The biggest thing it revealed was actually before they got there was the mysterious Django character who told Noma to take Alex east. I don’t know who this character is but he’s got powers we haven’t seen from other angels. One thing I noticed was that he was able to set the angels on fire, much like the fire back in the town Michael stopped by. Makes me wonder if there is a relation there.

I’m starting feel a bit sad. We’re halfway through this awesome season and I’m starting to feel that emptiness of having to wait for the next season and even worse, wait to see if the show will get renewed. I hope it does because this season has been excellent.