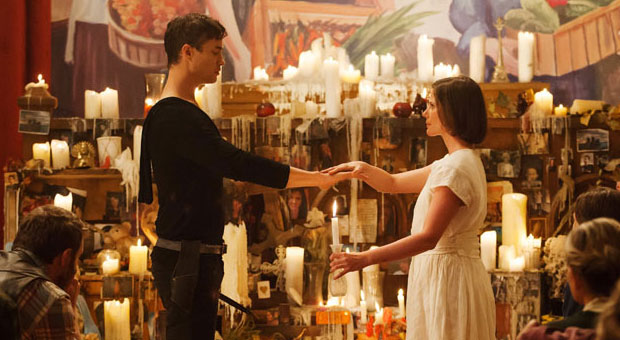 This week’s episode of Dominion, The Narrow Gate, did something that I normally don’t like in a TV Show. It jumped around a lot between plot points. But, because this season has been so good, the jumping around this episode not only didn’t bother me but actually worked pretty well. Before the opening credits we get 3 separate scenes that really set the tone for this episode. First we get Alex agreeing to go on a suicide mission and go after a key stolen from Julian by a “crazed angel” in the asylum in New Delphi. Then we get a short scene where Claire finds out that her would be assassin Zoe has been broken out of prison by V1 rebels. The last scene was a pretty powerful one between Michael and Laurel where Laurel reveals that the “celebration” in Mallory is really a sacrifice where she’s going to give up her life to protect the town. 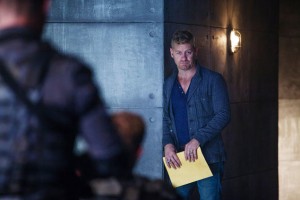 The Lady of the City never gets a chance to rest in Vega. With David taken care of, you’d think Claire would have a chance to breath but with Zoe out and knowing there are V1 Rebels out there who are coming for her, she has to be proactive. So she turns to a new character, Gates. Gates is an interesting new character to me because he seems to be an integral part in keeping the city running. Also, I got a little bit of a feeling that there might be some feelings developing between him and Claire. Now this is my own personal bias which I have had no shame in the fact that I like Noma and Alex together more than Alex and Claire. I think it would be great to see Claire and Gates get together just because I already like the chemistry there better. Plus, Noma clearly still has feelings for Alex (the way she greeted him when he got out of the asylum with the key). I just think it’s better for everyone. Anyway, I think it’s important to note that the V1’s seem to have some friends in the military. This explains how Zoe was able to disguise herself as one of Claire’s guards and almost kill her.  Claire was able to recognize that something wasn’t right with that soldier not taking the shot at Zoe and I think she’s realizing she’s got a bigger storm brewing. Her father and David left her a city that’s literally on the brink of civil war and she’s technically viewed as being on the wrong side. Sure, she’s always fought for the V1’s but at this point, she’s viewed as “the man”. I think the solution for her is going to have to be to bring in Zoe and make her and some V1’s part of the government of Vega. It’s the only way for this to work. 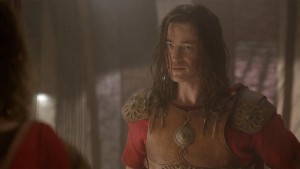 Laurel really brought Michael’s humanity back to him. As I’ve said in previous reviews, Becca was Michael’s connection to humanity. We see later on in the flashbacks how disconnected and disgusted with humanity Michael was. I will talk about those flashbacks in a minute but I thinker’s important to note that Michael has always maintained a little bit of disgust for humanity. End of last season he snapped and that part of him came out. His time in Mallory is really about him trying to find his way back to being a “good person”. What helped is that Laurel is selfless and open and honest. She was going to sacrifice her life for the good of the town and was very forthcoming with Michael about it. Becca, while she loved Michael, was also experimenting on Angels and lying to him. She betrayed his trust and that fractured the thin connection Michael had to humanity. In the end, Michael ends up “sacrificing” himself to save Laurel and the town. The interesting thing about this is that I don’t believe Michael thinks God is the one protecting this town. So I think my theory on Satan could still be true especially since we find out that Julian isn’t who he says he is, but also isn’t Satan. Oh and I gotta throw in the fact that I love that Michael showed up at Pete's window on some "Yeah dude...this is what you're NOT gonna do from here on out..." shit. 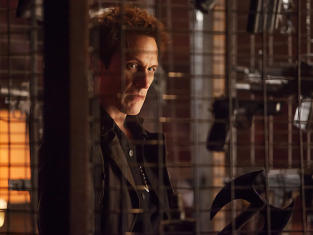 The flashbacks and what happened in New Delphi tie together so well. So the turning point for Michael and Gabriel was the destruction of Sodom and Gomorrah. It’s such an interesting dynamic to see the past and see it was Gabriel whose hands were clean and was trying to talk down his brother Michael. But one thing that was new to me was that Michael slaughtering humans was “honorable” to him. That’s how he viewed combat. But there’s a subtle distinction to make in that he didn’t get pleasure from torturing them. That’s why he was so disgusted with Lyrae. It’s one thing to slaughter humans in combat, its enough to revel in it.  Michael, as evil as he came off in the past, had a code. “Honor is to look one’s enemy in the eye.” That’s why he didn’t to use the brimstone & blood. But again, still did it within his code. Lyrae on the other hand, delighted in torturing and therefore was cast out of the Higher Angels. But now we see that he’s Julian. It makes me wonder if Gabriel didn’t have something to do with that. Killing his first human by his own hands clearly had a deep impact on Gabriel. What I've really been enjoying about this season is that Gabriel seems to be less of a villain and more misunderstood. First season we got a little taste of his real issue being his "daddy issues" but the flashbacks give more insight into why. This could be why Gabriel is so hesitant to attack New Delph. He could know that he's the reason for Julian being there and it explains why New Delphi is so good at fending off Higher Angels. Now Julian has the key to the destruction of humanity. Business is definitely about to pick up.

Speaking of the key, I knew we’d find out what happened to the General soon. Good to see that he’s still alive. I really enjoyed the scenes with Alex trying to hunt down the angel in the asylum because they were shot in a way that truly raised the suspense. Dark and armed only with a machete against crazed angels. Can’t say Alex isn’t a badass. My one question though is, why did the angel steal the key in the first place from Julian? Could it be these “crazy” angels found out Julian/Lyrae’s plan and wanted to delay it? And how come Julian can fend off Gabriel but couldn’t get a team in there to get the key back? Again, makes me think that Gabriel isn’t attacking New Delphi on purpose.

[divider]
Another fantastic episode for a fantastic second season so far. I really can’t wait to see what’s next. One thing that popped into my head. William Shatner is such a big fan of this show and loves tweeting about it, could we get a Shatner cameo as either Satan or God? Just something to think about.