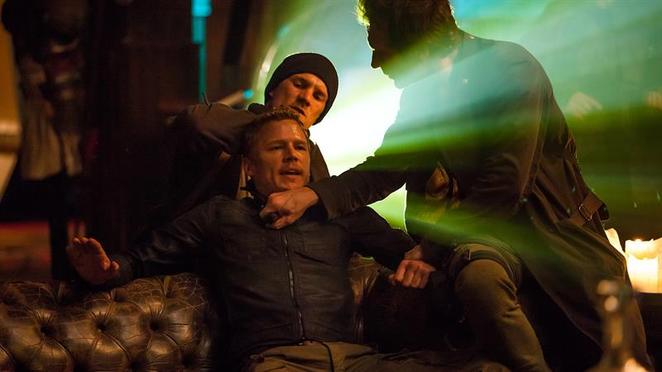 Welcome to the dark side Claire. 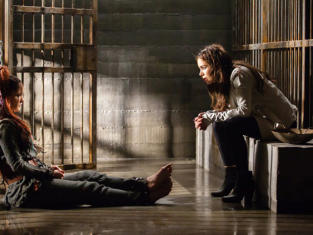 Claire Riesen is quickly becoming my favorite character on this show. Why? Because she’s not written like a typical female lead. It would be very easy to write episodes of Dominion and make Claire the naive leader who wants to do the “right thing” but never get her hands dirty. I’m so glad they haven’t done that with this show. The episode opens with Claire getting attacked by Zoe, an assassin, and in the end you kind of see her sympathize with Zoe. But only because she’s trying to prove her wrong. Claire is trying to get out of the shadow of her father and David, two men whose vision for Vega was going good for the 1%ers.  I think David had a good point when Claire came to him and accused him of sending the assassin. First off, David is right and it would shift the balance of power and its not really his style. And two, while Claire believes herself to be good to the people of the city, the V1’s still see her as part of the system. The difference between Claire and David (and her father) is that she’s going to do something about it. 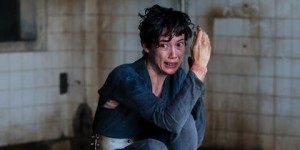 Claire is going head-to-head with David and is beating him at his own game. Oh and to make it better, Claire is getting help…but it’s from another woman, Arika. It also showed us a dangerous new tool: Using 8Balls as domesticated weapons. Arika seemed a little too familiar with this practice and was a lot more successful than I thought. I really thought this plan would backfire and end in a horrible mess but Arika and Claire pulled it off beautifully. Then Arika did the one thing that had to be done: She killed the 8Ball after. Which also brings up another point: Arika can’t be trusted. Everything ARika does is based on subterfuge and a quest for power. She started off in David’s ear, working him to get what she wants. Now she’s basically Claire’s most trusted advisor. The way Arika gained the trust of that 8Ball and got her to do what she wanted is a perfect example of how Arika works. She’s nice and caring and draws you in by telling you that she’s not your enemy and she won’t hurt you. She knows what you really want and she knows that knowledge gives her power over you. Then when the time is right, she strikes. In a way, watching her work with that 8Ball is kind of what she’s been doing with Claire. Removing David not only helps Claire but it removes a giant obstacle for Arika as well. Thing is, Claire is smart. I wouldn’t be surprised if she doesn’t see this as well. I’m really looking forward to seeing a confrontation between Claire and Arika. But not in the stereotypical “cat-fight” way some shoes have women butting heads but in the same kind of high stakes chess match way we see Claire and David going at it. I love the women on this show. 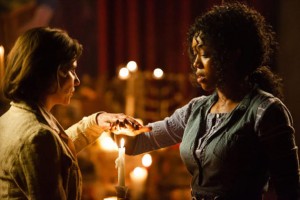 I’m not sure this Town that Michael is in is all that it’s cracked up to be. You know the saying, all that glitters isn’t gold? Yeah that might apply here.  I didn’t put it together that Harper was the same woman that saw Michael bathing until she showed up and we got the quick flashback. I must be slipping. Her appearance though put Michael in a bind. He’s not trying to reveal who he is to the people of the town but that also meant Harper (I don't watch the WWE but Victoria Crawford did a pretty good job this episode) having to lie about it. I think things took a turn for me when Laurel held Harper’s hand over the fire and told her she had to confess all of her sins so the fire wouldn’t burn her. Then when Wes took matters into his own hands and shrugged it off with “I’ll need to confess again”, that’s when it solidified my feelings. The structure of this Town reminds me of the comic book Evil Empire. Pretty much anything goes as long as you confess it? That’s not really order, just justified chaos. It’s going to be interesting seeing how the Town deals with Wes. We already know how Michael feels because once again, Michael’s had to physically put Wes in his place. It does make me wonder, maybe God isn’t the one behind this town being spared. Maybe it’s Lucifer. Think about it, as long as the town confesses their evil sins and deeds, the fire keeps burning. There doesn’t actually seem to be anything saying that they have to stop those deeds as long as they confess them. Maybe Lucifer is secretly reveling in the fact that this town is the only one “protected and peaceful” in such a time of horrific actions and war. What greater snub to God than saying “See Father, the world and people who worship you are failing but those that follow my way live in peace?”  Just a theory. 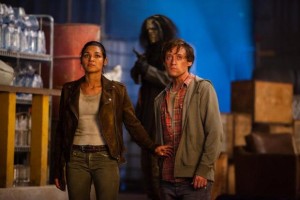 So…about New Delphi. I’m not sure Julian is the kind of person Alex wants to make a deal with. Seems like even Gabriel is a bit hesitant about a full on assault of New Delphi and Julian himself didn’t seem all that worried. Sorry but anyone who is told “Gabriel coming” and doesn’t do more than shrug, scares the life out of me. Julian has 8Balls working with humans but not in the same way Arika “trained” hers.  There seems to be actual collaboration and mutual respect. It can’t be that simple. Julian seems a bit off and I’m thinking there’s more to it than that. Maybe I’m wrong about my Lucifer theory in the previous paragraph and maybe he’s actually working in New Delphi. Maybe Lucifer is Julian? There just seem to be a lot of questions about what's going on here. The town has 8Balls working with humans and they seem to have some really advanced weaponry that allows humans to go toe-to-toe with Higher Angels. Considering what we saw Higher Angels do last season, that’s huge. So it begs the question: How is any of this possible? Then Julian isn’t even impressed by the tattoos. He’s gonna have Alex and crew run through a trial by fire. Yeah, a lot more going on here than on the surface.
Again, another solid episode. I thought the action scenes this episode were some of the best on the show so far. The one issue I had was the annoying lens flare during Alex’s fight. It made it hard to really see what was going on. But Noma’s was badass. Also think it’s smart of her to not reveal she’s a higher angel. Wonder what will happen when Julian finds out though?  So far so good with this season.