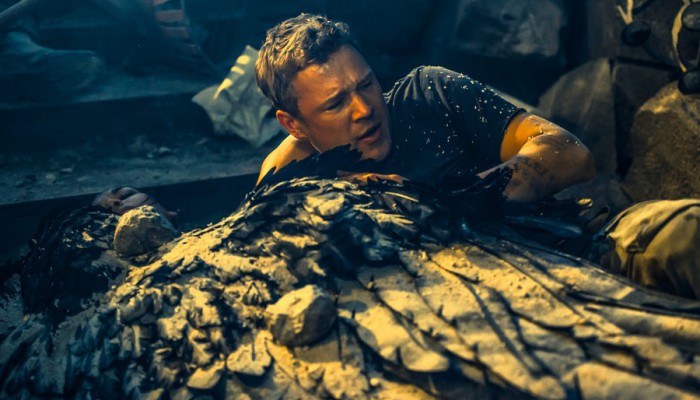 Seriously, this was one of the hidden gems of last year for me. More people should be watching this show because it’s really really good. In nine episodes last season Vaun Wilmott put together one hell of a show, especially when you consider the fact that the movie it’s based on (Legion) was terrible. I was so disappointed when the season was so short last year but I’m glad its back this season with 13 episodes (like the rest of Syfy). 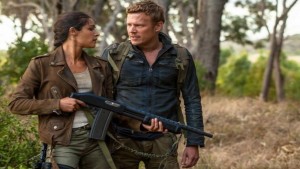 Anyway, I’m a little late on this review since episode 2 will be airing later on tonight but I still wanted to throw this up. Season 2 starts about 3 months after the end of last season. Judging from the blood on Alex, I’m assuming Gabriel wasn’t treating him as an esteemed guest during those 3 months. We definitely know Noma wasn’t getting the royal treatment. I like that they didn’t dwell on this though. I thought for sure we’d get 1 or 2 episodes with Alex and Noma having to figure out how to escape but they took care of that quickly by having Claire drop a bomb on Gabriel (more on that later). I’m glad they moved quickly through this because that means we get more of Alex & Noma working together and I enjoy those two together. Even if it’s not a full on relationship, I just like the chemistry of Egan and Engelbrecht. With both of them making it to New Delphi and being captured, it’s going to be interesting to see how things move forward with them. Noma’s a higher angel and was warned about going there and it seems like the folks at New Delphi might be more advanced than anyone at killing higher angels. Remember, last season Becca was experimenting and trying to find better ways to kill higher angels. Looks like New Delphi is way ahead in that research. Also something to remember, the General was heading to New Delphi last time we saw him. Wonder if he will pop up.

I love the new revelation with Alex’s tattoos. He still can’t read them, but now he’s pulled off a successful eviction. Remember last time he tried that it didn’t have the intended results. Claire’s mom had the angel evicted but she was left comatose. Now we see that the tattoos on Alex have shifted a bit and the eviction seemed to work. Pete doesn’t remember being possessed, didn’t die from the eviction and has no trace of the Angel left in him. This changes the game a bit. 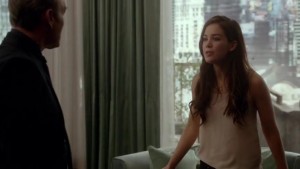 Back in Vega, Claire has her hands full. Even if I don’t think bombing Gabriel was the smartest choice, I love that Claire is in full control of the city. This is why I don’t actually want her back with Alex. I like her on her own without the need of a man to prop her up. She’s forged her own path and taken on Alex, her father, William and David. Sure she’ll make mistakes but I like seeing her bounce back from them. For instance, bombing Gabriel was a huge mistake. The risk definitely didn’t outweigh the reward. There was a low chance of it working and now that Gabriel is still alive, his retaliation will be brutal. It also now gives David a hand up. However, Claire has Arika backing her up and it seems like they’re about to make a move on David. So even with that mistake, she doesn’t cower, she just moves to the next thing. I love that about the character. I think Claire vs David is going to be a great chess match. When David slammed down his Ace card about how Alex was there with Gabriel and she could have just killed him, Claire whipped out the Big Joker and said she already knew and made the decision anyway. Anthony Head is perfect as David because the way he acted in that scene, it really sold the whole thing. He acted like he won, then Claire comes back with her knockout punch and it’s perfect. She needs to be careful though. David is clearly unstable. I thought it was weird that William was all the sudden back in Vega and then they reveal that it was all in David’s head. So David kills a man in cold blood in front of a bunch of other people, orders the V-1 section of the Wynn destroyed (fuck it if anyone dies) and is seeing and talking to images of his (Dead?) son that only he can see? Not a man I’d want to mess with. 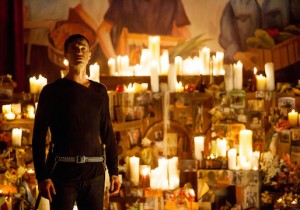 Then there’s Michael. Michael’s lost his faith not only in his father, but himself and humanity. He had a very dark (but understandable) turn at the end of last season. I probably would have killed Becca too if I walked into a room of my people being dissected like science experiments. But she was also his connection to humanity and now he’s lost that. Laurel and the people of this town could bring him back. I’m really interested in seeing how that fire was able to keep the 8-balls at bay. Could it be that God is back in that little town’s church? It would make sense considering they formed that town to welcome all religions and forms of worshiping. It makes sense that they would be protected.

I’m really excited for this season of Dominion. One of my favorite shows to watch last season and this season has picked right up. I’ll be interested in seeing what happens in New Delphi (and remember, Noma signaled Michael so he knows where they are) and also what’s going on with Uriel. She was there with Gabriel and they think she was in the tunnels. I want more people to watch this show. Last year at Comic-Con I talked to Vaun Wilmott and he said he had at last 5 seasons planned out and I hope we’re able to get all 5. This show is great to watch.