Disney+ By the Numbers

UPDATE (9/23/19): Pre-orders for Disney+ are now available at disneyplus.com. Pre-orders are only available for Disney+ monthly or annual subscriptions. The Disney+/Hulu/ESPN+ bundle will be available on Nov. 12th when the app launches.

Disney+, the next big streaming service, brings together several of content providers owned by The House of Mouse. The service is providing a host of content from Marvel, Pixar, Star Wars, National Geographic, and the OG Disney films, as well as a bevy of new content available at launch. With all of that content, Disney is also offering a variety of ways to access the platform, with plans and options for its die-hard fans and service bundles with its subsidiaries priced to reel in new customers. We crunched the numbers to see how their options compare, so you can pick the one that works for you. 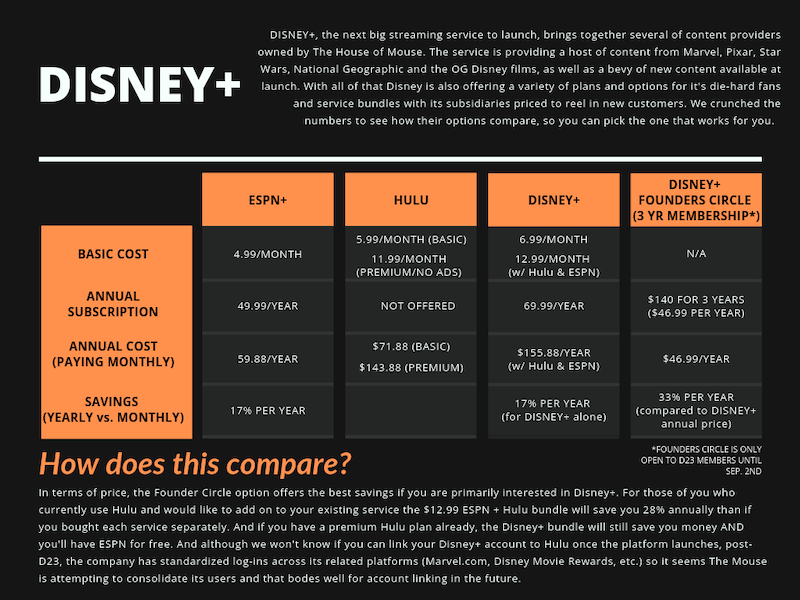 Right now, Disney+ is offering three basic plans: $6.99/monthly, $69.99/yearly or $140 Founder's Circle price for D23 members. The Founder's Circle option locks members into a 3-year plan with an overall savings of 33% per year. This option is only available to D23 members but if you sign-up for a free D23 general membership and purchase the plan by the end of the weekend, you can lock in this savings.

The next best option is bundling. Because Disney owns ESPN and has majority control over Hulu, when Disney+ launches in November, Hulu members will have the option to bundle their service with Disney and ESPN for $12.99/month. Because the price for each service is relatively low (ESPN is $4.99/month and Hulu with ads is $5.99/month) this is a steal. And if you're someone who has a premium Hulu plan at $11.99, this deal will give you live sports and Disney content with a small price bump.

Right now, it's still unknown if you will be able to purchase a Disney+ annual subscription separately and link it to your Hulu account but given that Disney has been standardizing user log-ins across platforms such as Marvel.com and Disney Movie Rewards, it would stand to reason that they want to consolidate their users and track how their customers are accessing their content.

And if you're someone who just wants all the Disney+ content you can handle, the streaming service has more than enough to keep you occupied. Currently, they've promised a live-action Lady and the Tramp, an original Christmas film, Noelle, starring Anna Kendrick and Bill Hader, an original Star Wars show, The Mandalorian, a Jeff Goldblum docuseries and High School Musical spin-off series at launch. Not to mention, their deep back-catalog of Marvel, Star Wars and Disney films, as well as, Disney Channel movies and shows.

Whatever plan you choose, adding Disney+ to your streaming services will not be a waste of money.

Disney+ launches on Nov. 12th. For more information go to Disney+ to preview the platform.