Defiance Season 2 Review: “The Opposite of Hallelujah”, “In My Secret Life” 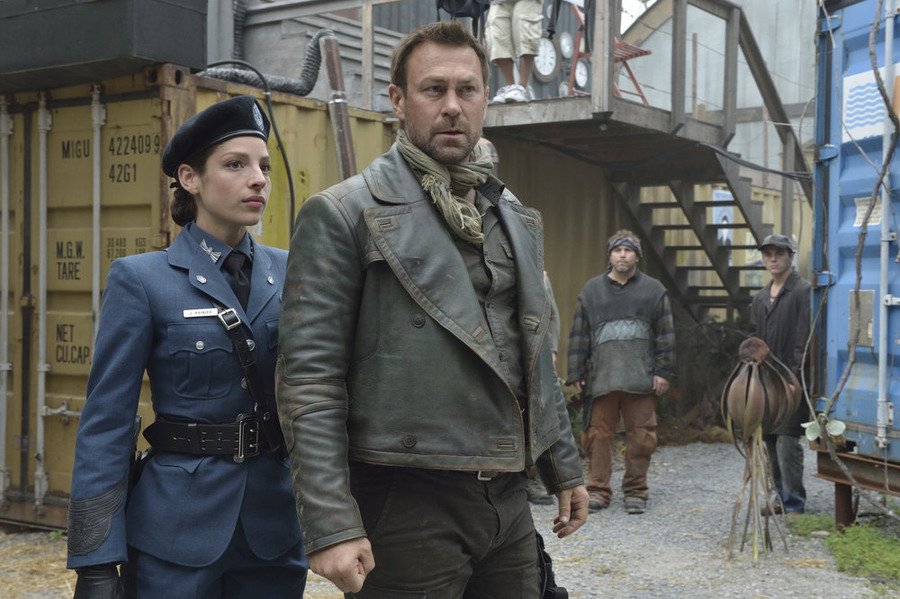 “The Opposite of Hallelujah”

The first episode of Season 2 of Defiance shows me that the mystery and vagueness of the first season was done by design, but I also think it’s doing a better job of filling in some of the questions we had. Season 1 sometimes felt like you started reading a book from the middle and had to look for answers to what should be simple questions.   This episode starts off the same way but does a better job of giving you answers by expanding the universe beyond just one city.

The Opposite of Hallelujah takes place 9 months after the events of last season. Defiance has drastically changed. The Earth Republic has taken over Defiance and is in complete control. Obviously Datak Tarr is no longer the mayor. His run as an elected official might end up being the quickest in TV Show history. He didn’t even last past the election night. The new mayor is a member of E-Rep, Niles Pottinger.  Amanda is running the NeedWant and still believes Kenya is coming back.  Datak is in a prison camp (sentenced to 10 years) for the killing of the Colonel. Doc Yewll is in prison as well although I’m not really sure why. One of the biggest questions I had with this episode is that I wasn’t sure how Doc Yewll ended up in prison but Rafe McCawley and Tommy weren’t. McCawley and Tommy helped Nolan rescue Irisa. While Yewll helped, she did it in a way that should have covered her ass. Not really sure how or why she was thrown in the prison camp. Anyway, McCawley is now working the mines along side his former employees as an E-Rep miner.  This whole episodes is a bit depressing to be honest.  So much has drastically changed and while it might not be better for the characters on the show, as a fan, it's just what the show needed.  The 3 biggest players from the first season (Datak, Rafe & Amanda) are all in completely different situations.  On the surface, Defiance looks to be for the better because of that as well.  One miner even comments on how under Rafe, they never earned the wages they're being paid now by E-Rep.  Of course that comes with the cost of being overworked and the town being occupied.  This episode sets up what is inevitably going to be a conflict with the Earth Republic and the citizens of Defiance trying to take their city back.

With Datak locked up, it’s Stahma’s time to shine. Alak is “running” Datak’s business but he’s “weak”. Truth is, Alak isn’t his father. He’s more compassionate and less set on the “old ways”. Stahma though is the real leader here. When she finally puts her foot down and speaks

‘direct’ to Alak, the only thing missing was the Ether beat dropping in the background. Her conversation with Alak was not only a reminder of how ruthless and ambitious Stahma is, but it also reassured me about the issues I had with Season 1. Season 1 felt like you never got the full story on all the characters and I was worried that the show would just skip over them. Stahma’s dialogue reassured me because it tied back to something from Season 1 that some people might have missed. In Season 1 there was a conversation between Stahma and Christie. In that conversation Stahma was talking about how Datak was not the man her parents wanted her to marry and that the influential Castithan she was to marry had an unfortunate accident with an airlock. It’s implied that Datak, being the man who loved and wanted Stahma is the one that opened that airlock. However, in this episode, as she gets mad at the fact that she’s always had to be the one to do everything to keep the Tarr family running and not get credit for it, Stahma let’s slip that she’s the one that opened the airlock. Of course Alak had no idea what she was talking about but it was a “holy shit” moment for me. And it fits the character. I love Stahma on this show. And with Datak in prison she’s finally starting to throw her weight around. And she’s right, the success of that family is due to her brains, cunning and planning. In Season 1 she was content with planning the background but it’s clear she’s tired of doing all the hard work and having everyone else take the credit. Despite the fact that she did kill Kenya, I think Stahma really did love her in a way and that Kenya made Stahma aware of the fact that she deserves to do more for herself and stop living for everyone else. In Season 1 when Stahma was with Kenya might be the one time when Stahma actually showed some weakness. I’m still left wondering if Kenya is dead or not. Sure, Stahma poisoned her but was it lethal? With Stahma? Who knows.

Nolan’s quest to find Irisa means we finally get to see some other places outside of Defiance. He heads to Chicago to track down the old cult leader from season 1 who had tortured Irisa as a child. I don’t think Nolan ever knew about him showing up in Defiance. I loved the fact that Nolan is really like a father looking for his lost daughter. He showed no mercy in killing the cult leader and I was cheering him along because fuck that guy. Then he heads off to Los Angles. The show is finally showing the scale of how much of Earth was destroyed and changed by the Pale Wars. I’m still not sure what Irisa’s visions mean or who the girl is that she keeps seeing (is it her as a child?).

All in all, I really liked this first episode. They’ve upped the scale of the universe and with all the characters in drastically different circumstances then when we last left them, it makes it a little fresher. Oh and I have to mention, the 2 handjobs (well, 1.5) Datak gets in this episode are absolutely hilarious.

“In My Secret Life”

This episode builds on Episode 1 and brings Nolan and Irisa back to a much changed Defiance. With all the players back in Defiance, it’s now going to be really interesting seeing how things play out. One thing we learned from Season 1 is that just about every character on this show has a dark side to them. As they try to band together against E-Rep (you know this will happen), I’m pretty sure those histories are going to come out.

Here are some of my observations about this episode:

Season 2 has started off stronger for me than Season 1 did. I’m really loving how things are developing and I hope they keep it up. Defiance being a town occupied by the Earth Republic has shaken up the show and given it a familiar but different feel. I feel like we’re still learning about all the characters but they’re starting to be fleshed out better.

*Edit* One thing I wanted to add.  I TOTALLY believe Pottinger dropped that Blue Devil on the counter of the NeedWant so Amanda could see it ON PURPOSE.  I don't believe he's using the stuff but he knows Amanda is.  That's why he asked Stahma to bring the remaining batches to him.  This season is going to get interesting.