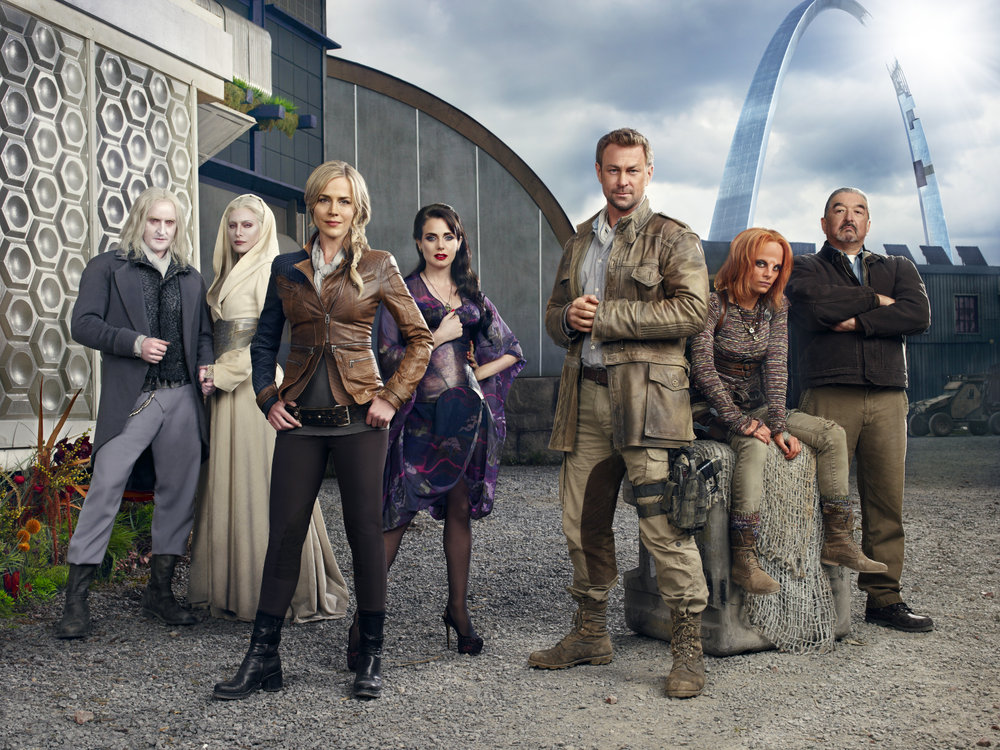 I remember last year seeing promos for the premiere of Defiance and thinking I really wanted to check it out. I actually like a lot of the TV Series that the SyFy channel does. Obviously there was the Battlestar Galactica reboot that was great. They also had the Stargate TV series which were also enjoyable. Even ones that I didn’t watch I heard were pretty good (Warehouse 13, Eureka, etc). All pretty good shows, but I was really starting to miss the type of science fiction shows I grew up with; Aliens, post-apocalyptic worlds, space travel, etc. I watched the first 2 episodes and liked what I saw. It wasn't perfect and needed some work but I liked it. Unfortunately I couldn't keep up with watching the show so I just figured I’d watch it when it hit a streaming service.   Well with Season 2 just starting, Amazon has the exclusive deal to put Syfy shows up on its streaming service and with only 12 episodes in Season 1, I figured “Why Not”.

Here’s the synopsis for Defiance:

[quote]In the year 2047, it’s a new Earth – with new rules. Over thirty years after various alien races arrived on Earth, the landscape is completely altered, terraformed nearly beyond recognition. The town of Defiance, on what used to be St. Louis, stands as a living example of what happens when humans and aliens live harmoniously (and often, not-so-harmoniously) together. Amongst the town's many residents are former soldier Nolan (Grant Bowler) and his adoptive Irathient daughter, Irisa (Stephanie Leonidas); the former mayor, Amanda Rosewater (Julie Benz); Rafe McCawley (Graham Greene), a powerful miner; the ambitious, alien Tarr family, Datak and Stahma (Tony Curran and Jaime Murray), along with son Alak and human wife Christie (Jesse Rath and Nicole Munoz) Jaime Murray); lawman Tommy (Dewshane Williams) and cantankerous Indogene Doc Yewll (Trinna Keating).[/quote]

That’s a pretty accurate description of the show’s first season. They cram a lot into the 12 episode first season and that leads to the biggest issue with Defiance Season 1: It really didn’t know what it wanted to focus on and because of the short season order it made the focus of the show seem disjointed. I’m a big fan of shorter seasons for a lot of shows but I’m beginning to think SciFi shows really do need 20+ episodes. As much as people complained about it, 23 episodes for Agents of SHIELD really helped the show in the long run. I think Defiance’s 12 episode run hindered the show a bit. The biggest problem being that they never really explain what happened. I just watched all 12 episodes and even I had to go to Wikipedia to try to get some more information on what exactly happened before we’re introduced to defiance. From what I’ve gathered Defiance takes place 20-30 years after several races of Aliens collectively called the “Votan” left their home planet that was about to be destroyed and made their way to Earth (which they believed to be uninhabited). Obviously Humans didn’t take well to all these new races showing up to their planet and eventually war broke out (Called the ‘Pale War’). From what I’ve read the Votan had ships orbiting with sleeping members of their race and there was an explosion that destroyed the fleet. Terraforming technology from the fleet

rained down on earth and started terraforming Earth in an unplanned way. This lead to the destruction of most of the cities, a mixture of Votan life forms and Earth and completely changed the landscape of the world. Now most of this information is never flat out explained in the show. Actually, the majority of it I’m reading about for the first time. I have no idea how accurate it is.  The show takes place 15 years after an armistice between the Votans and Humans from the Pale Wars. Most of the governments have been destroyed and the earth is a very different place. As an audience, we only get bits and pieces about what actually happened. Obviously there’s a lot of history that we aren’t made aware of. It hurts the show because there are a LOT of characters and relationships in this show. There are at least 5 Votan races (wiki has a 6th but I’ve never seen them on the show), each with their own individual look and backstory and history. We’re left to figure out a lot of the differences between the races but even then, some of them aren’t even named (even though we see them frequently). Then there are the humans. There are apparently some independent cities like Defiance that have full control but then there are others that have aligned with the Earth Republic government. 12 episodes are not enough to cover all this and Defiance doesn’t. Because of the short run though the show has an identity crisis as to whether it wants to focus on the overarching story or the characters/backstory. Sometimes you almost feel as if you’ve walked in on a conversation that’s been going on and you’re trying to piece it all together.

Now having said all that, and this is going to sound weird since I just complained about it in a way, the best thing about Defiance is the characters and their relationships. Almost every character on this show has a dark past and history that we get glimpses and hints at but aren’t fully revealed.

There’s a bunch of other secondary characters that have recurring roles. Dewshane Williams plays Tommy LaSalle, Nolan’s deputy in Defiance. As with many, you get just enough information and back story to know there’s more to his character but not everything. He develops an interesting relationship with Nolan and Irisa. Doc Yewll, the town’s Indogene doctor is another interesting character. I love doctors in SciFi show’s with terrible bedside manners. Trenna Keating is basically playing Doc Yewll like Robert Picardo played ‘The Doctor’ on Star Trek Voyager. Whitty, deadpan humor and sarcasm. But again, she’s hiding a dark path. That’s the recurring theme with the town of Defiance. Everyone puts on a good public face but each and every one of them is hiding a dark past. And the reveals about those pasts don’t occur immediately but will hit you out of nowhere and keep the show entertaining.

The action is pretty good for this show. Irisa and her knives always make for a good action sequence. You can tell they put a lot of money into this show because there’s a lot of makeup, designs and special effects. The only time the effects get weird is when they try to show scale. When they show a vehicle moving along a path and they’ve zoomed out, it still looks like cheap CGI. But considering how much they put into everything else, it’s not bad.

Outside of the characters, I also enjoyed the story. As I stated above, there’s so much going on that the show really can’t get to it all in only 12 episodes. You have two main plots going on. On the one hand you have Mayor Rosewater trying to run Defiance and keep it independent. At first it’s just focused on making sure humans and the Votan races live together in harmony but then towards the end of the season you start to learn more about the desire to keep the Earth Republic out. You get a lot of Mayor Rosewater having to stand between House Tarr and House McCawley and each house’s own motives. Then you have the story about what’s under the mines and how it relates to Irisa’s visions. Both of these larger plotlines give you bits and pieces of the history and backstory. While I listed it as a negative I don’t think it’s because of ‘bad writing’ but rather by design. It leads to some “holy shit” moments. Like in one flashback when you realize that Datak wasn’t always the sophisticated aristocrat running the underground and controlling half of Defiance. Or that the relationship between Rafe & Datak wasn’t always hostile. This is why I think the show’s mystery and lack of explaining is on purpose. For instance, for the first few episodes we aren’t told how Irisa came to be Nolan’s daughter. It’s hinted that she’s an orphan and he adopted her. Then one episode Irisa causally mentions that Nolan killed her parents. It’s actually a really really quick mention and wasn’t even the focus of the conversation. Then it takes a few episodes before they actually show what happened and it’s not what you would have expected. And it’s actually a good payoff. But to get it you have to just accept you’re not going to get answers right away. Hell, by the end of the season I had a lot more questions than I did when started the show. I actually like that though because it kept me wanting to come back (particularly because I know that the show WILL give answers…just not when immediately).

Despite its issues, Defiance IS NOT a bad show. I think it’s very ambitious and might not live up to all the hype, but it probably never was going to. At no point did I ever watch an episode from Season 1 and think “man that was terrible”. If anything, I would watch and wish they would explore more. Watching Season 1 all at once on Amazon Instant Video probably helped a lot in my enjoyment. I think it was probably easier to see the character development. I’ve watched episode 1 & 2 of Season 2 already and it seems like they’ve started to expand the world to more than just Defiance. I think this will help the show a lot. They’re giving us more of the big picture and backstory and how it relates to today and that’s a good sign. Check out Defiance Season 1 on Amazon Instant Video and let me know what you think in the comments.