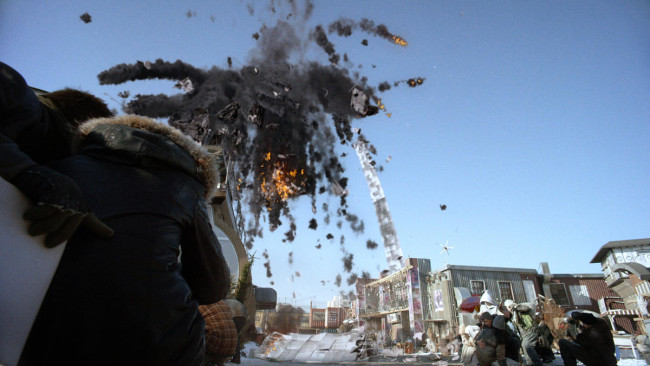 This third season of Defiance is doing what Agents of Shield did this last season. It’s not wasting too much time dragging out the plot and is moving at break neck speeds. They’re also trimming the cast from the past few seasons as well. I welcome both of these things. I think it’s been streamlining this season so far whereas last season felt like it was all over the place, only to have everything come crashing together at the end. As of now, every side plot we see directly ties into the larger plot of General Tak coming to destroy Defiance. I believe Tak’s storyline will reveal a larger plot, one that involves the Omec and whatever is going on with Nolan & Irisa’s scars. But these still feel more connected together than last season’s plots.

Destroying the St. Louis arch definitely keeps with the theme this season of redefining Defiance. That arc was not only a symbol to the town but also to us the viewers. I noticed immediately the grim tone the opening took after the arch was destroyed. In previous episodes, no matter how rough things are going, the opening theme of the show is still slightly upbeat and hopeful. Not in Dead Air though. There was a darker tune playing as the remains of the arc took center of the screen. This was just another reminder that nothing this season is sacred and that anything can happen. 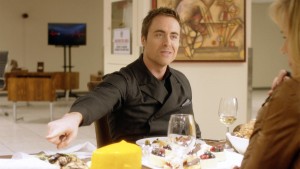 As if if opening the show with the arch being blown up and the severed arm of the young Casthian Dj front and center wasn’t dark enough, we finally get the answers to who raped Amanda. Now I’m pretty sure last season I called Pottinger being the creep who raped Amanda. Niles was always a creep to me and I’m pretty sure we all saw this coming. This episode just took it to another level. James Murray has played Niles Pottinger so well that I’m actually going to miss his character (I think it’s pretty safe to say that out of all the deaths we’ve seen this season so far, he’s the one we know for sure ain’t coming back). It takes skill to play a character that’s creepy, crazy but also sympathetic. Murray played Pottinger so well that at times when you knew he couldn’t be trusted you would almost let your guard down and believe he had good intentions. 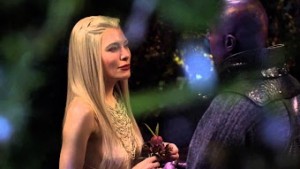 T’evgin and Stahma about to be the new power couple, I hope Datak is ready for this. Stahma still isn’t feeling being back with Datak, as we saw when they came back to Defiance. I’m still not convinced she picked Datak over Christie. I think Stahma did what she always did and made a calculation based on what she knew she had to do. Plus, she saw where the baby was hiding and figured this was probably the best way to keep most of her family alive. So now she’s stuck. If Tak comes into Defiance and takes over, she’s either going to be killed or worse…she’ll be back under the boot of men who don’t respect her. Enter T’evgin who clearly is attracted to her but is also every thing Datak isn’t. Datak is a brute. He has no skill for finesse or thinking things through. T’evgin on the other hand, can be a brute, he’s also clearly smart and knows when thinking things through first is the best option. He’s apparently a well known Omec, brilliant and known for his strategy. Which makes me wonder if he isn’t viewing Stahma as someone he can manipulate and use for his own plans. If you think about it, he comes off as the male version of Stahma. We know how powerful he is but around her he’s disarmingly gentle, clearly is using his sexuality to flirt (and more) with her but is also very perceptive of what’s going on around him. Just like Stahma, he doesn’t let lust get in the way of understanding what’s going on around him. He realized she was there for more than just some herbs and then he also picked up on the fact that she tried to poison him. Yet instead of killing her (which he would have been in his rights to do so) he made her breakfast then just put the cards on the table. Truth is, Stahma is vulnerable right now (even if she doesn’t want to admit it) and I think T’evgin senses that. Now, that doesn’t mean it’s all about business with him. I think there definitely is a mutual attraction here and I do think that these two together make one formidable team. 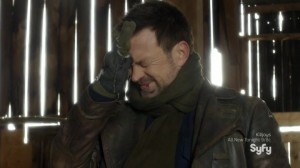 When Irisa & Nolan’s scars still hadn’t healed by last episode, we should have known something else was up with them. To go back to T’evgin, there had to be a reason he released Nolan & Irisa. Kindness doesn’t seem to be in the Omec handbook so there had to be a reason. My theory is that whatever happened in the pod caused Irisa and Nolan to be joined. This is the first episode we’ve seen any side effects (outside of the scar not healing) and the only real difference here is that this was the first time we’ve seen Nolan and Irisa this far apart. This could be a good way of forcing Nolan to address Irisa’s issues versus running headfirst into trouble to avoid dealing with his daughter. Also, I called Berlin and Irisa having to have a “buddy cop” moment. I think Berlin is bothered not only by the fact that Tommy died because of Irisa (even though it wasn’t her fault) but also because she knows Tommy loved Irisa more. There’s nothing worse than having to work with your ex’s ex, especially if you know they would have picked them over you. Add in Tommy’s death and Berlin’s attitude towards Irisa is understandable.

Another solid episode of Defiance. I love how they are shaking things up this season and I also love the pacing of the story. Nothing is dragging too much and they’re capping a lot of loose ends and tightening up the cast. Also, this Stahma-T’evgin relationship intrigues me.