Defiance Review: This Woman’s Work, If You Could See Through My Eyes 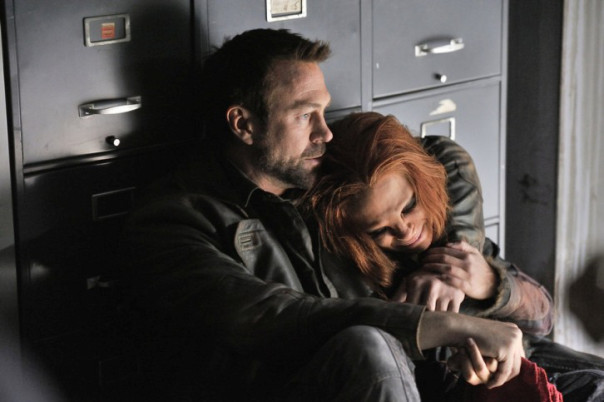 Due to my San Diego Comic Con trip last week I missed last week’s review for Defiance. So this week means: Double Review. First up, Episode 6 “This Woman’s Work” 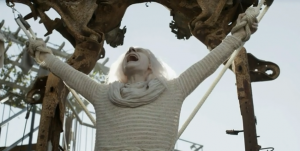 I love the character of Stahma Tarr. She’s not only the best characters on Defiance, but she’s one of the best characters on TV period. Stahma gives off the appearance of being subservient and weak but it’s just her way of making people underestimate her. The only person to truly get how dangerous Stahma is was Nolan in Season 1. Once again in this episode both Datak and the religious leader underestimate just how ruthless Stahma is. This is how good the writing is for this character: I actually thought she was going to turn the other wives against their husbands. I thought “Maybe she’s going to start a Casthian feminist movement”. She really had me fooled. She killed those women then framed the religious leader and got him on the shaming rack. Crazy thing is, I thought she was convincing at least one of those women to come to her side. But once it was clear she couldn’t get all of them, she went to plan b which was murder and frame 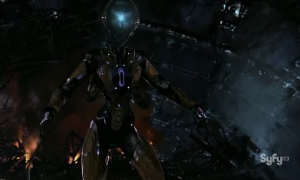 I remember reading on the Defiance Wiki page that there were more Voltan races we hadn’t seen yet and the Gulanee were one of them. One Gulanee killed 40+ well-armed men like they were nothing. This was something I wanted to see more of this season. While the show does mainly focus on the characters inside of Defiance, there is this larger world going on. We started this season visiting some of the other cities but then came back to Defiance and have been pretty much focused there. I get it. The show is about the town and the people in it and for the most part it works. But I’m glad they did this episode that involved another arc-fall and introducing another race of Voltan. I’m actually hoping at some point we get some involvement by the Votan Collective.

One thing of interest was how Pottinger felt about Churchill. Pottinger is a weasel but it turns out he really felt a connection to Churchill. While I agree with Nolan that there is no comparison between Irisa and Churchill, it's intriguing to me that Pottinger considered the bond to be the same. The biggest difference to me is that Nolan would never send Irisa out to do what Pottinger did with Churchill. So in a way, while he clearly cared about his Bioman, he still put his own life and existence first.

Berlin is a Freak

She starts the episode basically making a sex tape with Tommy and ends the episode screwing Nolan. Who knew Captain Rainer was this much of a freak. Honestly this whole thing was messy as fuck on all sides. First off, Tommy was wrong for acting like his change of plans wasn’t a huge deal. Rainer loves the fuck outta Tommy and whether Tommy wants to admit it or not, he still has feelings for Irisa. It’s the only reason he stood by her this episode and it’s the main reason he doesn’t’ want to leave Defiance. He cares about her. So I can’t blame Rainer for getting drunk and wanting to get back at him but going to Nolan? See, everyone on this show knows just how to cut each other deep. Nolan and Tommy have been at each other’s throats all season and it came to a head this episode when Tommy quit. Now Nolan’s sleeping with his girl? This can’t end well. Espeically when Nolan only really entertained this because Amanda was being sympathetic to Pottinger.

If You Could See Through My Eyes

Everyone Wants to be Stahma

Told you last episode that Stahma was a great character. This episode proves it because everyone wants to be her. Datak wasn’t really feeling the sex with the housemaid Jalina until she offered to pretend to be Stahma. Then all the sudden it took an “angry sex” turn. "Hearing my name over and over again.....what do you think I am...some kind of egomaniac?" Yes Datak, yes you are an egomaniac. It's why you're in this position now.   It’s going to be interesting seeing where the Stahma/Datak relationship goes from here. I don’t see Datak making Stahma an equal partner and Stahma isn’t going to accept less. She called a truce this episode but Stahma really doesn't seem all that interested in dealing with Dataks' shit and neither do the rest of Datak's former men. If Datak does regain power, does he try to do what he did when he got out of prison and make examples out of the people who betrayed him?

It was interesting seeing this Rafe/Datak team up. Last episode we got Nolan & Pottinger and this week we get another uneasy alliance between two people who hate each other. But unlike Nolan & Pottinger, this Datak & Rafe alliance might last a bit. They have an end goal in mind and Rafe needs the weapons that Datak has promised. I can't help but think "at what cost?"   Is kicking the Earth Republic out just going   to open the door for the Votan Collective to enter into Defiance?

Then at the end you have Christie at the Castithan "transvestite" club using the name Stahma. More on this later.

Doc Yewll is the second greatest character on this show

"There's 2 types of friends in this world....the type to help you hide a dead whore and me" Doc Yewll is the is up there with House & the hologram Doctor from Voyager when it comes to terrible bedside manners. Datak tried to act like he wasn’t sleeping with Jalina but she knew. 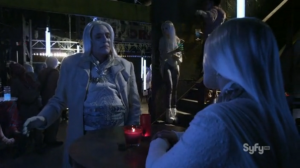 I'm not sure if Viceroy Mercado is better than Pottinger or worse. He definitely doesn't have a high opinion of Pottinger and wants to replace him with Amanda. So in a way that's a good thing. Seems like the Earth Republic really wants Amanda back on their team but she doesn't seem to want to go that route. I don't trust Mercado though and honestly I think he might be worse than Pottinger.

Deirdre is a Homewrecker

Saw this coming from the first time Alak turned her down. Christie is really stupid, on multiple levels. She really thought that going to an underground club where humans pretend to be Casthians and flirting with other men there would make her closer to Alak? I get it that some couples look to try different things to get closer but they usually do those things TOGETHER. And Deirdre knew this and put hone helluva plan together to make Alak no longer trust Christie. Christie even tried to bring up Alak killing Skeevor but that was a low blow. She’s lived in the Tarr household, she has to know Alak wants no part of the family business. I chalk this up to Christie being young, dumb and pregnant.  And while cheating is wrong, in a way you could make an argument that Christie started cheating on Alak first.  Accepting courtship gems and going down to this club without telling her husband? Yeah, Christie is 100% in the wrong here. 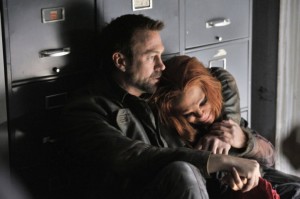 "One rule...we live or die together" Now that we’re in the second half of the season I expect us to get a lot more information on what exactly is going on with Irisa. I'm starting to get a better handle on what's going on with her. I'm assuming she's some "born again" spirit since both her and the other Irathient where clearly born on Earth but they look exactly like the counterparts on the ship. It seems like she's trying to save people but then I'm wondering why the "devouring mother" still seems so evil. Still a lot of questions about this but I'm glad Nolan now knows though. Irisa is his daughter as far as he's concerned and he cares about her. She didn't tell him because she wanted to protect him but now it's his turn to help her. I'm glad they're on the same page again now.

One thing this episode was missing was Tommy and Berlin. I know they were technically necessary but after the events of last episode, their absence stood out. Even with Pottinger we got a throwaway line about why he wasn’t there. I get that there was a lot going on here but they should have put something in.