Defiance Review – The Awakening, Upon the March We Fittest Die 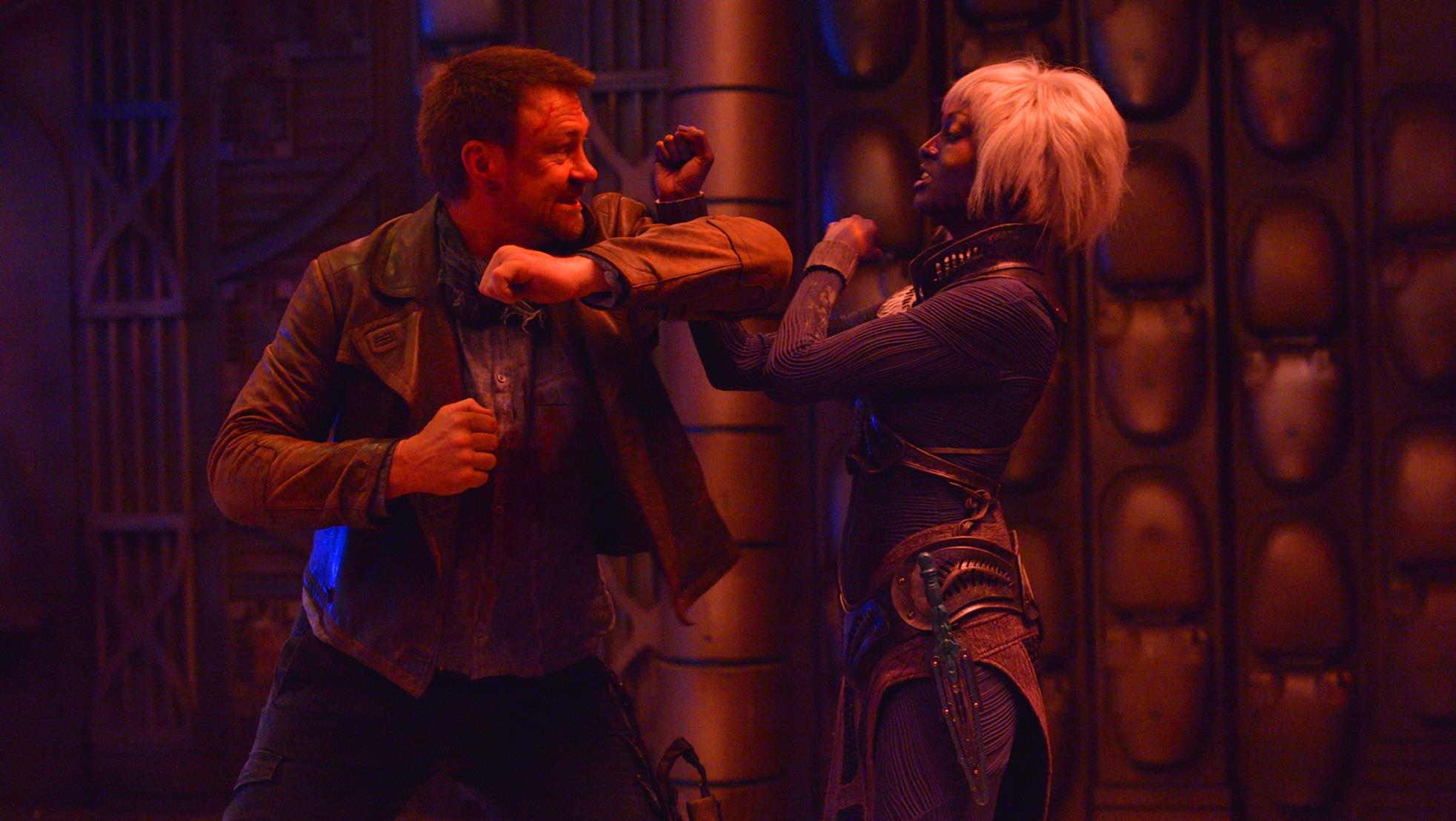 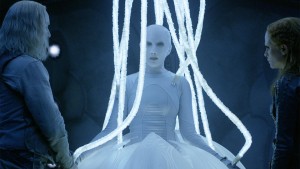 I decided to write my review for episode 12 of Defiance, The Awakening, together with the season finale, Upon The March We Fittest Die, because I find that typically the last 2 episodes of Defiance really do fit better when watching them as a continuous 2 hours. I believe usually SyFy blocks off 2 hours for the season finale and plays both episodes back to back, but with the line up they have right now on Fridays I see why they didn’t do that. With that out of the way, let me say, that this was a terrific end of a third season for Defiance. It also works well as a series finale if the show doesn’t come back for a 4th season but I’m really hoping it comes back.
As a whole this season was the best one yet for Defiance. There were still a few things that felt a little rushed or unresolved. Still not sure wha the point of having Berlin leave only to have her come back a few episodes later. I chuckled a  bit when Amanda was able to pluck a book off her shelf to figure out that Kindzi took on T’evgin’s powers by eating his heart. These aren’t big issues though. I think it’s what happens when you have a lot of material and only 13 episodes to get them in. I do think Defiance would benefit from a longer season. Not a full 22 episodes but 16 would be about right. Now, with that said, I believe this 3rd season was very efficient in getting to the point and really hitting us hard and fast. Then there’s also the massive culling the show did, which really made you wonder if anyone was really safe. And this was all constant throughout the season and never really felt cheap. 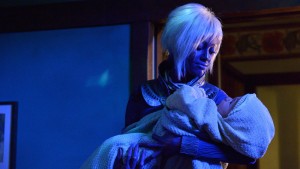 The Awakening is a great penultimate episode. It really sets the stage for the finale by letting us know shit is about to go down. In order for the town to be saved and the Omec to be stopped, it’s going to take something major. I thought it was smart how they threw in that the Omec coming down from the ship weren’t as strong because they’ve been asleep for so long and needed to eat. The only issue I really had was the inconsistency with Kindzi. Kindzi took out a whole VC convoy by herself and that’s before she gained T’evgin’s strength. In this episode and the finale, while she’s not killed (until the very end at least) she is slowed down a lot. The only thing I can figure is that we never saw her fully transformed and maybe when she attacked the convoy she was. She was able to shrug off bullets like the Terminator though.
Since I’m reviewing both episodes I’m going to break out each of the major characters and give some thoughts on how these last two episodes portrayed and shaped their characters:

Doc Ywell - My favorite character on Defiance. While she’s the cold doctor, there’s always been a bit of humanity in Ywell that she tries to hide. Her arc in the last two episodes really shows that. She goes from a mindless slave, forced to do the will of the Omec to making a huge sacrifice to save Defiance. You could also make the argument that her sacrifice to become part of the Omec ship was also about selling her soul. Ywell has done a lot of things she’s not proud of but capturing and feeding her own patients to the Omec was the one thing she had no control over. Yet its what affected her the most because her free will was taken away. 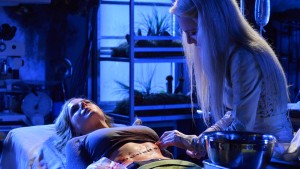 Stahma - In the first time in 3 seasons we’ve really seen Stahma humbled. She had three truly humbling moments. First was with Alak when he called her out on her schemes. I think it’s at that moment that Stahma really saw how Alak’s anger towards her was really justified by her actions. Then there was when she was begging Kindzi to spare Luke. I thought when Stahma said she would give Kindzi the most important thing to her, she was going to try to substitute Luke for Alak. But instead she was willing to give up her freedom and be obedient to Kindzi, which when you think about it…probably is the most important thing to Stahma. Being her own person and having the freedom to turn any situation into her own really is the most important thing for her. The final great moment was Stahma was when she was tending to Amanda’s wounds. I can’t remember a time when I’ve seen Stahma apologize and felt it was genuine before. This really was the first and only time. She seemed to take responsibility for everything.

Datak - I was concerned a few episodes ago when Datak returned to Defiance because it seemed like he didn’t really learn. But these last two episodes made me realize that he did. Sure, he’s still Datak and he’s not “too” humble. But he also put himself in harms way twice these last two episodes when he didn’t have to. First was when he convinced Doc Ywell to take him to the Omec to be fed. He had some harsh words for here (more on that later) and then faced down 3 Omec. Then he goes to save his family. And finally he volunteered for the mission to go to the Omec ship and destroy it. While I could see the old Datak doing these things. Something about this felt more like it was about honor than arrogance. Also, his moment with Doc Ywell on the ship when they realized she wasn’t going back down with them showed how close both of them grew. They really became friends which says a lot since neither of them really have that many friends 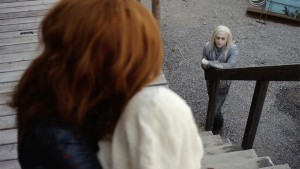 Irisa - Irisa has come a long way. I feel like this season was really about separating her from Nolan. Its ironic that the branching of Irisa and Nolan comes in a season where for most of it they were physically unable to be apart for too long because of the arc tech in their brains. We got to see a softer side to Irisa which is more than the killer Nolan is and pretty much taught her to be. Even though we have this separating of ways though, I feel like the father-daughter bond between Nolan and Irisa is even stronger than ever. The finale also brought back something I picked up in the earlier episodes which is the possibility of a Alak-Irisa relationship. Poor Andina made her move on Alak and it seemed like she was finally on her way. Then Kindzi broke her neck. But we get scenes of Alak watching Irisa hold and play with Luke and it just seemed natural. It also makes sense. The similarities between Alak and Irisa really didn’t hit me until this season because we rarely saw them interact with each other. Both are children of Earth. Both struggle to find their own path despite the path their parent(s) want them to be on. Both of them came into their own this season and became their own unique individuals. It’s actually a perfect match when you think about it. Alak is his own man but he also needs a strong woman in his life. First there was his mother then there was Christie. Irisa would be the perfect fit. She’s not human but she’s fully ingrained in human culture and life. And while they aren’t the same alien race, Irisa’s always felt like she was missing out on her heritage by not being around more aliens. Like I said, perfect match.

Amanda - Amanda’s come a long way. She’s really embraced being Defiance’s mayor and taking responsibility for everyone there. It hit her hard that she trusted the Omec and that in turn she put the town in danger. But the truth is, she did what she had to do. Also, T’evgin was a good ally. Amanda had no reason not to trust him or to know that Kindzi would kill him. Her best moment was her conversation with Stahma. You tend to forget how close those two had been at one point in Season 2. I will say her foggy, rescue of the townspeople seemed a bit much (no one else was defending the town?) but I’ll allow it. 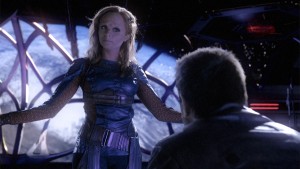 Nolan - The nagging question about Nolan was how the show was going to deal with him being wanted by the VC. The way they handled it was brilliant. First we get Nolan back in the element he’s best at: survival. He’s not a bad leader either but after the slaughtering of the militia, he was broken. Add in the arc tech and he just wasn’t the old Nolan we knew. Now in these episodes we see Nolan back at it. He had to give mini-pep talks to Doc Ywell and Amanda about how they couldn’t dwell on the decisions of the past but had to deal with the immediate threat and issue. I think that’s why the militia thing hit Nolan so hard. When the General was defeated, he had nothing but time to think about all the mistakes he made. Nolan is at his best when he’s just full steam ahead without really thinking too hard. Up on the ship he realized that Irisa was right. He saw an opportunity to finally get out and explore away from the death and war that he knows. He also realized that it was time to let Irisa go on her separate path.
[divider]
This was a great season of Defiance. Sure there are minor nitpicks here and there but overall, it was very enjoyable to watch. I’m not sure if they’re coming back for a fourth season but I really hope so. I don’t know (or care) what the ratings on the show are but I know that like most SyFy shows it has a great social media presence and the cast is very interactive. If it doesn’t come back, this finale serves as a great end of the series since a lot of the characters got growth and you can imagine where things go from there. But I can’t help but think of all the cool possibilities if the show comes back.