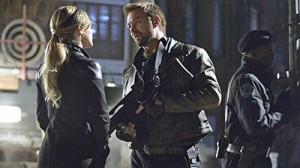 While I did enjoy this episode I’ll be honest it was kind of a drag. Defiance is a fun show to watch but sometimes I feel as if they try to do way too much in 60 minutes.   I’m starting to get the feeling I did last year when the show was trying to pull in all these different directions at once. The problem with the lack of focus is that the show becomes pretty disjointed and you lose track of the different stories. Because of this, each week, some storyline that’s been building up gets suspiciously put on the backburner with no resolution or mention. Last week it was the absence of Tommy and Captain Rainer and this week it’s the absence of Christie/Alak/Diedre.  Berlin & Tommy do show up this episode and we get a little bit more information on what’s going on with them, but it’s back to the background again with them. I know there’s a lot going on in the world of Defiance but it sometimes feels like the writers themselves get overwhelmed in all of the characters and storylines they’re trying to create. It would be different if it was like Dominion for example. At least there, all the characters have a common goal and their storylines interconnect. But with Defiance they don’t seem to be related and it just feels like a jumbled mess sometimes.

Anyway, that’s my little rant for the biggest problem I’m having with Defiance right now. I still enjoy the show but they’re going to have to calm down with introducing so many new plot lines. Even with this episode, by bringing back Kenya, we now have another storyline that will more than likely take precedence over others that have already been started. It’s getting kind of crowded. But enough of that. On to the review…. 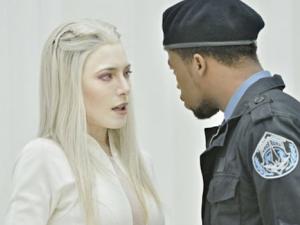 Well Tommy went and did it. He’s now an Earth-Rep brownnoser. I’ll be honest, I’m pretty disappointed in what’s become of Tommy. He just can’t win. At this point, him dying would be good for him and put him out of his misery. He’s such a simp. You know Castihans and their sense of smell is ridiculous. Stahma could smell the pregnant on Christie and now she can smell Nolan’s man musk on Captain Ranner. The exchange between Berlin and Tommy after that pretty much sums up how much of a loser Tommy is now:

"God no we're just having lots of sex"

You’ve lost her Tommy. That’s Nolan’s girl now. Tommy’s now has had 2 different girlfriends stolen from him. Tommy might just want to start a tab at the NeedWant and call it a day.

So as smart as Stahma is, I don’t think she realizes that once Datak’s men turned on him to support her, there was no going back for them. It reminds me of the scene in The Prestige when the Root realized that he could make demands. The men like working with Stahma because she’s more fair than her husband, however, if there is a reconciliation, Datak will kill them. It’s not like there’s not precedence, he’s done it before. Stahma isn’t the kind of character which you can write off as not having thought through different scenarios but I’m starting to notice some chinks in her armor and sloppiness.

Sukar is back from his nap folks. It’s funny, I meant to say something about his absence in the last review and all the sudden he shows back up in this episode.   I would love to care more about this Irisa storyline because I know it’s the main storyline, but as I mentioned to open this review, there’s so much going on in Defiance, it’s hard to keep track. The lack of focus on the show has really hurt this storyline (and many others) because I DO think it’s important and a good one but it hasn’t really been fleshed out. And outside of the finale last season, it feels like we almost never get a whole episode on it.

I’m torn. On the one hand I’m glad Kenya is back. I liked her character in the first season and was sad to see her go. Kenya had some really good interactions with other characters. The family dynamics between her and Amanda were good but never got fully explored. So I’m glad she’s back so we can continue that. But as has been the theme with this review, I’m worried that Kenya’s return is going to just stuff more into an already crammed show. I’m hoping they tie her return to Stahma and Datak’s secrets. Stahma’s been great this season but as I said above, I’m starting to see cracks that can be exploited and I think Stahma is at her best when she’s challenged. I’m also interested in seeing how it was that was holding Kenya. At first I thought it was Datak but it couldn’t have been him. Rafe was suspiciously absent from this episode so it could have been one of his men. I don’t believe that it was the Voltan Collective because that seems too clean. If anything, the bomb itself could have been a ploy to set up the Collective and kick start the war again.

One reason why I don’t feel too worried about this crowded season is that the show writers always seem to bring things up. So in this episode, while it seems like Amanda is okay, it’s repeatedly brought up that she’s only 2 weeks clean. Nolan questioned whether she was imagining someone calling her about Kenya and even Doc Yewll thought she was stealing from the clinic because she was a junkie. Its little things like this that keep me engaged with the show because nothing is ever really forgotten.   As long as the show keeps bringing them up, I’ll stay in.

I know it seems like I was really down on this episode but it wasn’t bad. I’m just a little concerned. All this could be solved as the season ends so I’m just going to wait and see. Last season ended pretty well and I have faith this will too. But for some reason the crammed season just got to me this episode.