Defiance Review: S3E7 – The Beauty of Our Weapons 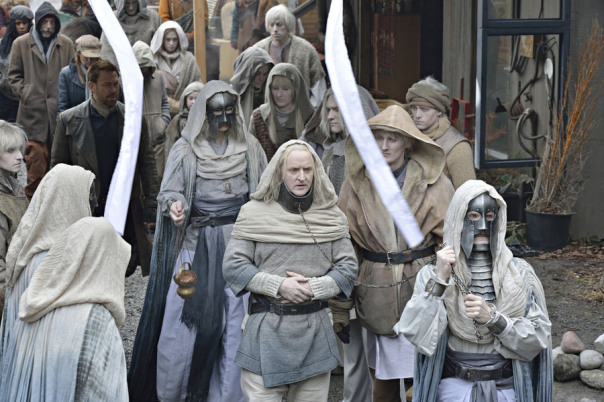 I’ve been enjoying season 3 of Defiance but  The Beauty of Our Weapons felt a little off to me. I think there were a few moments for certain characters that stood out to me as being out of character for them. It didn’t ruin the overall episode for me but I do think I’ll need to see more of where they’re going with this.

First there’s the T’evgin-Kindzi-Stahma “love triangle”. So last week the show established this incestious relationship between T’evgin and Kindzi. Granted, I’m still not sure they’re blood related but she keeps calling him father and he calls her daughter so I’m going to go with the human definition of that relationship. T’evgin tells Kindzi that Stahma means nothing to him and is just a thing. Then Stahma shows up at the door hurt and T’evgin is all over her. Now I’m not too surprised by this because I think he has more feelings for Stahma than he is willing to admit. All that is fine and I think it does add tension to this group dynamic. However, T’evgin has repeatedly stop Kindzi from doing things that would jeopardize their alliance with Defiance. Remember when she copied the code from Doc Yewll and he told her to destroy it because he didn’t want to risk alienating the town. Yet here he is taking in a wanted fugitive and as Kindzi pointed out, jeopardizing the relationship with the town. Now all this could be chalked up to typical male Voltan “chivo”. In short, this is really a Voltan “Your Dick Is Not Your Friend” situation playing out in front of us. T’evgin is risking his alliance with Defiance and his relationship with Kindzi all cause Stahma put it on him really good. Now this could all be part of his plan or it could be as Kindzi said and T’evgin could get bored with Stahma…but I just don’t believe it’s that simple.

The other issue I had was Kindzi disobeying T’evgin twice like that. Sure, it’s not the first time she’s done it, but never has it been this overtly. I mean she attacked Stahma the first time and all I could think was “You know T’evgin is going to be pissed right?” It did give us our first look at how fast he is so that’s a bonus. But then Kindzi does it AGAIN at the end of the episode. I mean T’evgin had barely walked out when she’s already trying to force something down Stahma’s throat. I guess it remains to be seen what the end goal is. Maybe I’m reading it wrong and Kindzi is trying a different method and instead of trying to kill Stahma, she’s trying to show her that she’s right. Kindzi might be trying to show Stahma that T’evgin has other plans and that if they go through, he’ll become bored with Stahma. 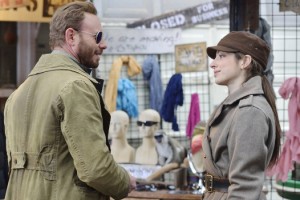 Good to see Ian Ziering pop up on Defiance before Sharknado 3 takes Twitter by storm (see what I did there?) .  I’ll be honest, I thought the man selling weapons to General Tak was someone else and so I was wrong in my previous review. Berlin going with Conrad was another one of the things that I just didn’t buy. It felt out of character. I know what they were going for, but with this being the first time we’re learning of her relationship with Von Bach, it just seemed like they rushed to get Berlin to do a complete 180. I mean she could have left when the E-Rep left last year after Tommy died and she stayed to keep order. Now when the town really needs her she’s going to skip out because she THINKS she’s still in love with Von Bach? As Amanda said, if Conrad really does love her then he’ll wait for her. I don’t even buy Berlin’s excuse of not believing Amanda can protect the town and being scared. It just seemed completely out of character for Berlin because it’s never been established that she was like that. Maybe this is just set up for her to make a triumphant return to Defiance when they really need her but I just wasn’t buying it. This reminded me too much of last season when they would rush character changes. I’m hoping this was an anomaly. Also, if Conrad knew that Berlin was in Defiance, why would he sell weapons to the VC and Tak? Maybe I missed it and Conrad didn’t know. I’ll be honest, I’m still not trusting Conrad right now.

Now the scenes between Alak and Datak were really good this episode. Alak continues to grow as a character. He’s trying to be everything his parents weren’t. I love that he didn’t let his father slide when Datak said he betrayed Defiance to save his son. Alak brought up, Luke and asked what his father thought would happen to his half human grandchild. Alak has really become the best of both worlds. The humanity he’s learned from Christie has given him a more complete world view and allows him to see a bigger picture than both his parents. For Datak’s part, I see that maybe he’s starting to realize he’s made a lot of mistakes and even more important, he’s trying to own up to them. Which was odd (but refreshing) to see from this character. The whole time I was waiting for some Datak to try to kick off some flawed escape plan but, it really seemed like he was trying to atone for everything with asking for death by Shaming Rack. And the moment with Alak bringing Luke to the front and telling him that one day he’ll explain to him how his grandfather was a flawed man but an honorable one was a good touching moment. Now I don’t believe Datak will end up dying although, after this season, anything can happen.

Nolan’s speech at the end to rally the militia was great. I was feeling a bit iffy about the whole Nolan-Irisa thing this episode until that speech. It was the first time we’ve seen Nolan really accept responsibility for what Irisa has been through. Before the Irisa broke down and Nolan gave that speech, it felt like yet again we were going to see Nolan put aside his daughter’s well-being for the larger goal. So when Nolan told Irisa he needed her out there to keep the militia together all I could think of was “here we go again.” But then she broke down and Nolan gave that speech where he said he dragged her out there knowing she wasn’t ready for it but that he knew when they needed her, she would be there. I honestly think that’s not only something I needed to hear as an audience member but also the character of Irisa. Like Datak, it shows that Nolan finally understands his failings as a father and that his “child” needs him to grow up and finally understand her. It’s taken us 3 seasons but I’m glad we finally got here.

I liked this episode despite the fact that in some cases it felt like some characters had developments rushed like last season. Still, I think the growth of Nolan/Irisa and Alak/Datak were done really well and was nice to see the pay off for those. I also thought it was odd that they throw in that Tak is going to get into Defiance by drilling under it now that his Stasis Net cutter was destroyed. I guess it was supposed to be a big shocking reveal but it felt more like someone put in a cheat code. Just seemed way too easy. I mean if you can drill into Defiance, why even bother trying to go after the stasis net or even use Datak/Stahma as spys? You should definitely lead with drilling into Defiance and sending in a small strike force. But that’s just a minor issue. Oh and it really doesn’t pay to be a worker at the Need Want.