Defiance Review: The Cord and the Ax

This season of Defiance is starting off so much more intriguing than the first season. It still has the same issue of the storyline with Irisa isn’t gripping me as much as it should. At least not until the end of the episode. However the other character arcs are so good I’m completely invested. There's enough interesting dynamics going on that my confusion with the Irisa/Devouring Mother storyline doesn't bother me as much.

Secondary Characters are the New Redshirts 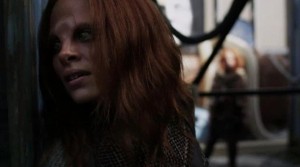 So it’s clear Irisa is going crazy. This whole “Devouring Mother” thing is still a mystery to me but we're getting more information now. I'm unsure of who the child Irisa sees is. I'm not sure if that's just a manifestation of the alien ship after the deal she made to save Nolan or if its' supposed to be a younger version of her. Either way it's clear that it has some purpose for her and the people she's killing. Speaking of....

What's up with secondary characters catching it? Bertie ain't have to be killed like that. This show routinely kills these characters that seem to have important supporting roles. Bertie was out in the market trying to head home with some groceries for the McCawley family after her roller died...she heard the good news about Christie and then...we see Irisa over top of her with blood all over her hands. I swear being a secondary character on this show is like being a redshirt on the Enterprise. I do have to ask how Irisa got Bertie's body all the way to the woods without being seen. I can buy the idea that the entity inside her fried the surveillance equipment when Berlin was trying to play back the tapes, but that was a crowded market during the day. How did no one see little ole Irisa dragging a body?

Obviously the Tarr family dynamics is the biggest interesting storyline so far. They hinted at this during the first season but Alak really doesn't want to be like his father. It's actually pretty amazing. I remember last year when he was telling his father that they're on a new world now and the Castithan old ways were dead. Last year when he was about to get married, he didn't sleep with the prostitute even though it was part of tradition. Alak really is the new breed of Castithan on Earth who wants to assimilate. I'm interested in seeing what happens to Alak after the events of this episode. Sure he killed Skevor but he didn't want to.

At the risk of throwing up in my mouth, I have to ask: What does pregnant smell like? Stahma took one sniff of Christie and was like "old up...is that pregnant I smell on you?"   Then Alak took a whiff. It was as if they were checking out a new perfume Christie had put on. I like that Rafe has become more accepting of Christie's marriage. He's not happy about it, but I think he's trying. But he's also not going to let Alak break his daughter's heart. He knows who and what Datak is and he doesn't want that life for Christie. Rafe all but tells Alak that he knows he killed Skevur. He informs Alak that he's breaking his promise he made earlier. Only thing missing was Rafe cleaning a shotgun while never making eye contact with Alak and this would have been the greatest "You break my daughter's heart and I'll kill you" talk of all time.

"You couldn't control the one thing you need to...yourself"   #AlakBars 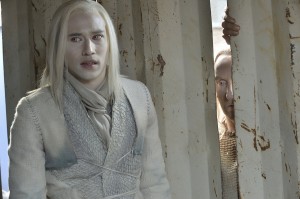 Who knew Alak would drop some hot Ether on his father like that? Like I said above, Alak DOESN'T want to be his father. I think it's two-fold. His mother and father both think he can't be Datak but I really believe it's more that he doesn't want to be that way. Look at the talk he had with his father at the detention camp. Alak is fighting back against the old traditions and ways of his race but also his father. That line about his father not being able to control himself is real. Datak's worst enemy is himself. He won the election to be mayor because of the cunning schemes of his wife. And he threw it all away in 30 seconds because he felt disrespected by the General. Alak for better or worse, wants to assimilate. He reminds me of a child of a racist father who doesn't want to be like his dad and is trying everything he can to distance himself. The question is, will he be able to?

The sexism and patriarchy of the Castithans is very interesting. It’s something I noticed in the first season and in this season its playing out this season with Datak still not realizing how dangerous Stahma is. He thinks Stahma wouldn't betray him. Because there’s no way a woman could ever run his business or scheme against her husband. Sure he finally figures it out but after how much time? He's a brute. A blunt object. He's predictable and easy to maneuver around. But he's still dangerous

Nolan is a good father

I’m really hating Tommy this season. Okay let me rephrase that. I’m disappointed in the direction they’re taking the character but I also get it.   Since he went legit, Tommy has been the guy who doesn't make waves and does the right thing. I think that's why he was so attracted to Irisa. She was different, wild and a complete change from his by the books life. When she left, Tommy went back to what he knew: Being straight laced. That's why he's with the Captain. She's just as by the books as he is. Then Nolan & Irisa pop back up in Defiance. Amanda disrespects Tommy and knocks him back down to being Nolan's deputy. Tommy's fed up. Still, I'm hoping he turns it around. I'm not a fan of him acting this way. His whole thing about Nolan have no regard for Irisa by going through her stuff was just bullshit. Nolan loves Irisa. That is his daughter. He knows something isn't right with her and he's worried. I disagree with Amanda when she says that Nolan isn't a good father. He's a great father. That's why he cares so much. He's actually reached the point where he doesn't want to push Irisa away anymore so he doesn't press her even though he KNOWS she's going through something.

Not to mention, Amanda on that blue devil so much she's licking the paper to get that fix. Can't take her advice on anything. And I called that shit last week with Pottinger and that "accidental" showing of the Adrenal. Pottinger about to be Amanda's pusher and she's going to do it cause she's spiraling out of control too. 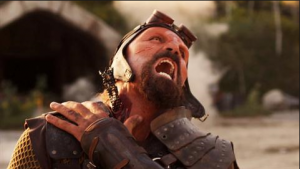 Sukar got stabbed in the neck by Razor Rain in Season 1....he slept it off.

Look man. Sukar doesn’t die. Ever. At this point Sukar has died more times than Danny Trejo in B movies and he keeps coming back. I've lost count of how many times Sukar has died. I thought Irisa saw Sukar as part of a dream last season. Turns out nah, he was really alive. He's shirtless chopping wood like he hasn't died at least 3 times already. Sukar got shot and fell out of the arch (granted he didn't fall all the way down to the ground). Even if he lived, his body should be completely broken. Yet Sukar just wakes up later on like nothing happens. Even this episode, same.thing.happens. It looks like yet again, Sukar is killed by whatever is in Irisa but turns out....he was just napping.

As was Bertie AND the Irathian that Irisa "killed" in episode 1. Seems like the Devouring Mother entity is taking over people's bodies. It gave me the same vibe as the movie Invasion with Nicole Kidman. This is by far the most intriguing thing about this Irisa storyline. We finally got some glimpses as to what might be going on. When Irisa shot herself (didn't see that coming) and was healing like Wolverine, we see flashbacks of what appears to be some Irathians (one that looks like her) planning to take over the ship. What's intriguing to me is, I thought the ship under the mines was there for long before the Voltan showed up in their fleet? So was this ship from a previous expedition? Lot of questions I have and I'm hoping we start getting more answers.

Pottinger cut of Yewll's finger for the purpose of getting into her safe. I'll be honest, I originally thought he did it just to be an asshole. Doc Yewll really is a mystery. I don't think she's evil and while I think she's morally gray, I believe she has good intentions. The question is: What is she working on? What's in her journal? How does this relate to Irisa? We'll find out soon enough I guess.

Datak showed up back at home like: Daddy’s home

Datak is such a brute animal he didn't know if he wanted to strangle or drown Stahma. Of course Alak was helpless. I think the only thing that saved Stahma is the fact that somehow Datak was able to figure out if he didn't stop he'd be going right back to prison.   I'm interested in how this will affect Stahma. I love the unpredictability of her character. She's one of the best female characters on TV in my opinion and I want that to continue. It wouldn't be right seeing her go back to hiding her true ambitions like last season. With Datak being out, it's going to be interesting see him take control of not only his businesses and the town but also his own family. The Tarr family dynamics....great TV

Loving this season of Defiance right now.  There's a lot of interesting things going on with the characters.  They're in such different places than they were in last season and it's really shaken the show up and given it a refresh.