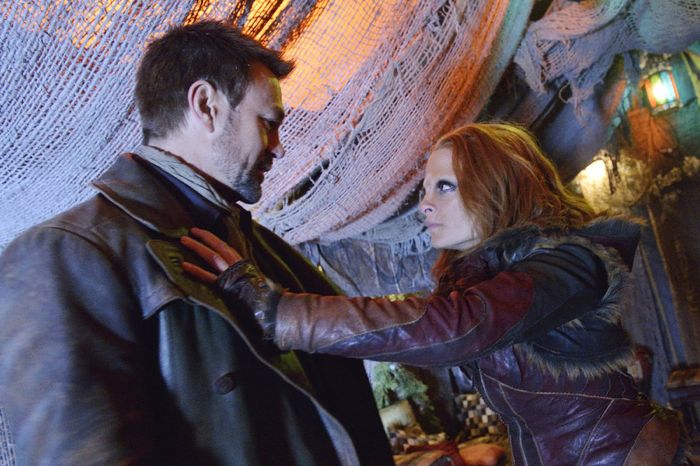 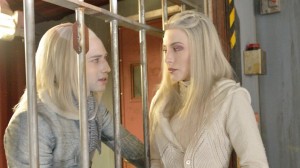 With the season coming to a close this week's back to back episodes continue to show me that while the earlier episodes seem to have a lack of focus, that seems to always be the plan. It almost reminds me of the first season of Arrow. Every time you think there's a plot hole or something that they've overlooked or forgotten, it comes back later. One of the lingering issues I still have though is about the time passing between episodes. I want to believe that not a lot of time (maybe a day or two, no more than a week) is passing in between episodes. This would help explain why things would happen between characters one week and then next week they were missing. But Christie in these last two episodes really throws that plan out of the window. She's SUPER pregnant right now. Not only that but she's going to be the world's fastest learner when it comes to speaking Castithan. Now this could be explained by the fact that since her baby is half Castithan the normal birth cycle is accelerated and it's also helped Christie pick up things faster. Honestly I think that last part was even implied a little bit in "Doll Parts". Christie picked up Castithan, her senses are heightened and she even beat the crap out of Deirdre. So while nothing was flat out said, I think there's will be some revelations about what this cross-species birth will do (aren't there always?).

Bottom of the World

And by "Hoes" I mean the men along with the women. I swear the STD rates in Defiance have to be astronomical. Everyone is having sex with everyone else and there isn't a condom in sight. I won't spend too much time talking about the Deirdre - Alak relationship because it's really tied to Doll Parts but Alex was messy. But in his defense, he knows he's messy. Out of all the people having messy relationships at least Alak seems to realize his mistakes and tries to correct them. It's become very apparent that Alak isn't his father. He ends it with Deirdre and then reconciles with Christie. We also get our first sign that Christie is beginning to accept her role as a Castithan wife by learning certain traditions. But again, more on that later. 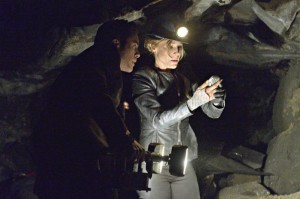 This Nolan/Berlin/Amanda/Pottinger situation is a bit out of control. While I don't trust Pottinger and think Amanda shouldn't be with him, I also don't want to see her with Nolan. I kinda like him with Berlin to be honest. Sure it was just a sexual relationship between the two but I think my appeal of them being together is that they're both characters that seem one dimensional on the surface but have so much more to them. Berlin comes off as a corporate shill but you can see that she's got so much more to her and that she's got a good side to her. And Nolan, we'll we've seen how he can float in the grey area but we know where his heart really lies. Amanda though, just seems too straight laced for Nolan. I just think a relationship between them would be annoying. That doesn't mean I want to see her with Pottinger who I fully believe is a creep. I don't know what "truth" he told her in the mine but I know he's not to be trusted after what he masterminded with the Kenya "clone". I still think he's the man who raped Amanda and she just doesn't know it

"Your price is too high. I'll gut the little whore myself"

Well Stahma is back. We saw her have some moments of weakness last week but this character rebounds better than Dennis Rodman in a Bulls jersey. First, she's well aware that her new "crew" is questionable so she doesn't go to them about taking care of Deirdre. But then when Datak lays out his terms for what he wants in turn for taking care of the problem, she flat out refuses him. She even makes fun of the fact that Datak needs to do lowly card tricks to earn money. Nice to see her back on her game.

If there's one complaint I have about this episode it's that they brought Ambassador Tennety back just to kill her. Granted her character wasn't needed much this season because there's plenty of slimy E-Rep characters to fill her shoes. But the back and forth between Tennety and Amanda was good and it's a shame we won't see more of it. To be honest they could have used another throw away character for the purpose they used her for. I think this was a waste of a decent character with bigger potential.

I actually like what they've done with Quentin McCawley. He's come back to Defiance and he's no longer the bumbling boy struggling to earn the respect from his father to be more than #2. He reveals that he's an assassin now working for the Votanis Collective in order to secure his mother's release. I'm now interested in seeing what this show does with Linda Hamilton in that role. We didn't get a lot of her but I liked what I saw. She immediately recognized that Quentin still hasn't grown enough. He still sees his father as his enemy and not as someone how has done terrible things to protect his family. Rafe once again is taking the blame for something a family member has done. I'm also wondering now as I write this if this is why they killed off the Ambassador. They needed another high ranking E-Rep person to be killed in order to set the stakes high for Rafe being in trouble. While I understand that, I still think they could have picked someone else.

Oh and I have to throw this in there...Tommy is still a simp. But it's okay. He loves Irisa and when the woman you love asks you to do something, you're going to do it. I can't blame him for this one.

All in all I give this episode a B+. It's starting to wrap up some of these storylines and things are coming together. I think killing off Ambassador Tennety was a mistake and a waste of a character but it's not too big of an issue for me.

I really enjoyed this episode. There are two big pieces to it: The murder of Deirdre and Nolan going after Irisa. I liked the way both of these unfolded.

Christie goes to the Dark Side 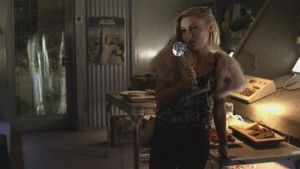 It wasn't until Stahma started smiling when talking to Datak that I realized that Christie was the one who threw Deirdre off the arc. I just didn't see it coming. I guess I should have after the conversation she had with Stahma about doing horrible things. The clue was when Stahma said "The most we can hope for is that what we want is worth the evil we do" and Christie seemed to finally "get it". The biggest reason I liked this was that it looks like Christie is willing to do what she must to be a good Castithan wife even though she's human...however, she's going the Stahma route. I saw a lot of parallels between Christie and Stahma this episode (and a little bit in Bottom of the World).   Sure, Christie went to that Castithan club to learn more about the culture but she's living in a Castithan house being run by a woman. That right there is already conflicting with Castithan culture. So it seems like she's learning first hand from Stahma that her role in the house is to protect her family even if that means from themselves. In a way, Datak and Alak are weak. Datak was ousted from his own house because he didn't recognize how manipulative, smart and controlling his wife was. Alak isn't like Datak but he's also a lot more lax about almost everything. It's up to the women in the Tarr household to pick up the slack and handle problems. Hell, Stahma even told Alak that maybe sitting in jail for a bit would serve him well like his father. And remember, Christie really could have just gone to the authorities because Deirdre attacked her first. Instead she handled the situation like a true Tarr. Don't mess with the women of House Tarr.

I'll mention it here since it's tied to this, but the only thing that I didn't really like about this episode was the whole "Amanda as deputy" thing. She was trying too hard. I actually think having Berlin run the investigation would have been more interesting. Amanda's a mayor (I can't wait for her to get back to that position) but a deputy? She's terrible. They really tried to write the character as if she was investigating like Nolan and it just wasn't believable at all. Also the flashbacks with her talking to Deirdre weren't getting the emotional reaction from me that they were trying to. I get it, Deirdre was in love with Alak and we were supposed to see this "other" side to her. But we know that she was really nothing more than a stalker who tried to abort Christie's baby and kill Christie. 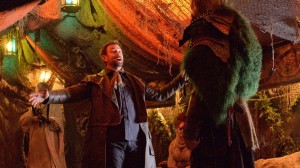 There was a lot of good stuff between Nolan and Irisa. The argument that they had was pretty emotional and I can't really say that Irisa was wrong. We know that Nolan loves her like she's his own daughter but it's easy to see how having Nolan as a father could really stifle Irisa's growth as an Irathient. I think both were being genuine in their feelings even though Irisa may not have been in complete control. I also like that we finally got some more solid information on what's going on. Basically she's being controlled by an artificial intelligence from the ancient ship. This definitely explains a lot even though there's still a lot more questions. An artificial intelligence from an old ship making these Votan species think they're being lead by a God brings a little clarity to the situation of why "she" is trying to destroy the earth.  Oh and after Tommy set off the device to disable all the other votan, I guess we can say Sukar is back to taking naps again. 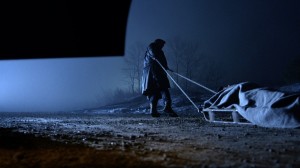 Poor Tommy. Even when he's given the power to beat Nolan he still can't. I am happy they're back to working together. They even had a little reconciliation. Of course Tommy gets stabbed and is now fighting for his life. I hope he survives. I need the "band" to get back together. I would like to see Nolan and Tommy working side by side because they do need each other. And it sucks that now that they've finally talked and come to an understanding, Tommy now dying. Although I think Nolan rushing to save Tommy and drag him back to town instead of immediately going after Irisa is a good sign. Not to mention, I want to see Tommy and Irisa back together. Oddly enough, while I hate the thought of Amanda with Nolan now, I really like straight laced Tommy with Irisa. I think it does him some good.

I give this episode an A-. I like see the evolution of Christie as well as learning more about what's going on with Irisa. Plus we get Tommy and Nolan reconciling and I'm glad to see that happen. My only real negative was Amanda running the "investigation" and the attempt to make Deirdre seem like a normal, not crazy woman.