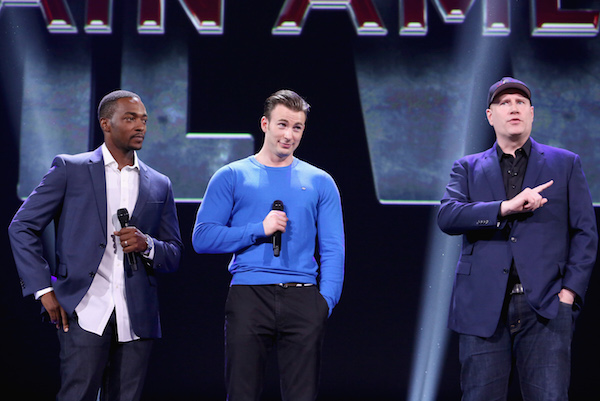 So Saturday was the Worlds, Galaxies and Universes: Live Action at The Walt Disney Studios panel at the D23 Expo. This was THE panel that most folks were waiting for. It covered the live action offerings from Marvel, LucasFilms as well as some live action versions of Classic Disney tales. Considering the fact that this was the main reason for me applying for Press access to the expo and waiting in line for over 12 hours, I have to admit…it was all worth it. I’m going to break this out into 3 separate posts, one for each section of the presentation: Marvel, Disney Live Action and Star Wars. I’ll then have one more post with my overall thoughts and impressions about the 2015 D23 Expo.

Absent from San Diego Comic Con, lots of folks were wondering what Marvel would have for fans at D23. First off, let me cover what they didn’t bring up.  I was hoping we’d get some announcements on directors for some of the remaining Phase 3 films, particularly 2018’s Black Panther. A month or so ago after Ava DuVernay said that she turned down the project, Feige said we should hear about director for Black Panther by the end of August and other Phase 3 films (Captain Marvel, Inhumans, etc) soon after. With Straight Out of Compton doing so well and his name on the short list, I thought maybe we’d get the announcement of F. Gary Gray as the director but so far, nothing. The movie is over three years away so no news on a director really isn’t that big of a deal. I think because of the excitement about the project and the DuVernay rumors, everyone is really dying from anticipation to know what’s going on with the film.

Despite the lack of director news, Marvel still had plenty to give to fans. 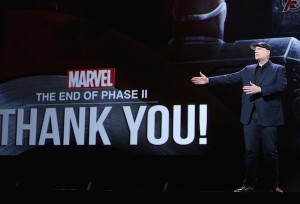 Chairman of Walt Disney Studios Alan Horn led the presentation by first thanking the fans and showing the schedule of all of Disney’s films between This years D23 Expo and the next one in 2017. Spoiler Alert: It’s a lot. He then went into talking about Marvel and how Ant-Man was their 12 consecutive #1 hit. Just so we’re clear, that’s a 100% success rate. He then brought out the man who has become the symbol of success for Marvel, Kevin Feige also thanked the fans for the support for the end of Phase 2.  Hearing Feige talk really puts what Marvel has accomplished in perspective. Everyone is always gunning for Marvel and suggesting what they should have “been” done but Feige talked about how in 2009 at the first D23 Expo he wasn’t on stage but in the audience (pretty sure as an invited guest and not in the general admission line with the rest of us).  That was a year after Iron Man and Incredible Hulk got released and Marvel’s attempt at creating a Cinematic Universe was still looked at as skeptical. Six years and 10 films later, Feige is on stage talking about the end of Phase 2. That’s an incredible accomplishment and run.  With Phase 2 wrapped up, Feige moved on to talking about Phase 3 which is clearly Marvel’s most ambitious phase ever. He started with Dr. Strange. 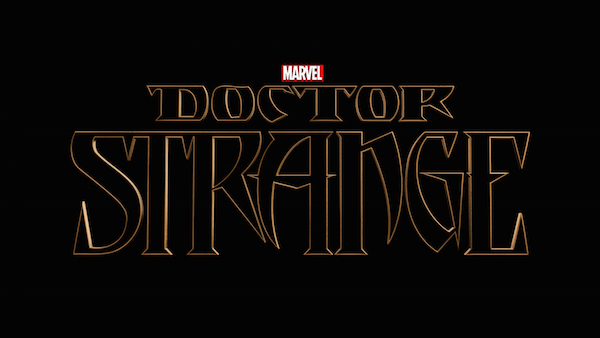 An interesting tidbit that was dropped by Feige was that Dr. Strange, much like Ant-Man, was another film that Marvel has been working on in the concept phase since before there was an MCU. Dr. Strange will be the first new property in Phase 3 for Marvel and Feige says the goal is to push the boundaries. Dr. Strange hasn’t stared filming yet so there wasn’t any footage to see. We did get a message from Benedict Cumberbatch who was in London shooting for a play (Hamlet I believe). Both Feige and Cumberbatch teased the idea of multiple dimensions and weirdness. We did get to see some Concept Art from Dr. Strange. Feige said the artwork would be exclusive to D23 until the Art Of book for the movie comes out after the movie. The artwork lives up to what both Feige and Cumberbatch said about the movie entering different and strange territory for Marvel:

Again, early look at the artwork but it’s clear that Marvel is really trying to go full steam ahead into the world of mysticism and magic. I know Feige has talked about not wanting to do origin stories any more but it does seem that Dr. Strange does cover Strange's origin.

Most of the cast was still in Germany but Anthony Mackie and Chris Evans joined Kevin Feige on the stage. They flew in specifically for D23 Expo. One thing that always amazes me about the cast of marvel movies is how much they love working together. Evans and Mackie had a lot of fun playing off the crowd. There’s about a week left of production and Evans & Mackie were flying right back to Germany after the Expo.

The first look at the Captain America: Civil War looked great. Here are some things that stood out: 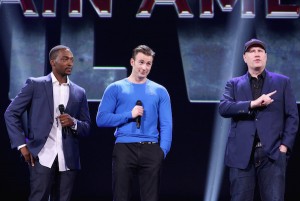 I don’t think it was a coincidence that Evans and Mackie are the two cast members who showed up. While massive, Captain America Civil War is still a Captain America story and I think Mackie as Sam Wilson is a big part of that as well. Marvel’s been trying to show that Sam Wilson’s Falcon is his own character and not just Cap’s sidekick. For all the talk about how Marvel isn’t diverse enough, they really do have some of the bigger named black male actors in them: Idris Elba, Don Cheadle, Chadwick Boseman, Chiwetel Ejiofor and Anthony Mackie. They definitely need some more black women and characters of other ethnicities. While I think Tilda Swinton is a great actress and will be fine in the role of the Ancient One, Marvel probably could have headed off some complaints by casting an Asian woman or at least a woman of color. Still, the movies are getting more and more diverse.

Now before I end my recap, I want to address the complaints I’ve seen from people wondering why the footage and artwork doesn’t get released for those who couldn’t attend. While I understand the frustration of not being able to see the footage from things like Captain America Civil War or The Jungle Book or the concept artwork from Dr. Strange, what you have to understand is that these things are shown in their early stages to the fans at events like D23 Expo. It’s basically the studios’ way of thanking fans, many of whom slept on hard floors for as many as 12+ hours just to get into the 7000 seat venue. I will have a separate post later on about the overall event including lines later but the line to get into this Disney Live Action Panel capped at about 530- 6 am. That’s 4 1/2 hours before the panel started. The studios understand that people not only paid good money to attend these events (Tickets are not cheap and that doesn’t include flights & hotels) but then also endure long waits just to show up and support. So the reward is exclusive first looks. Also, a lot of times we see things before they’re finished and touched up and ready for mass consumption. Most times before footage is shown we’re given the warning “This isn’t ready yet and its just a first look but just for you guys…here you go.” It’s less about punishing those who can’t attend and more about rewarding those who can. Don’t worry, many times what’s officially released is a much better product than what we were shown.

In my next recap I will go through Disney’s massive non-Marvel and Star Wars slate coming over the next 2 years.