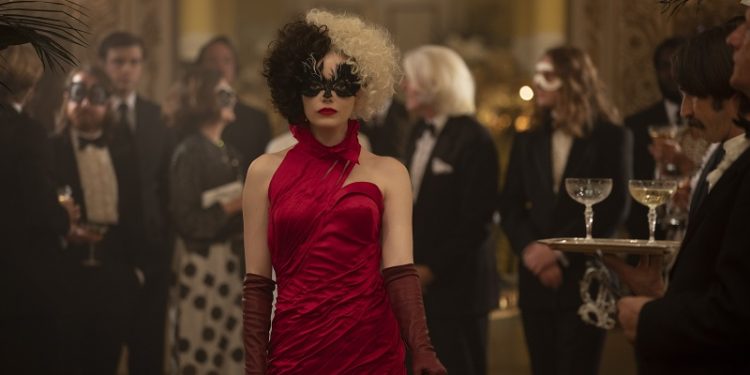 After the success of the first Maleficent, centering another iconic Disney character in a live-action film was inevitable. Having that character be Cruella De Vil from 101 Dalmatians? Well, that's a move certain to have a some people asking why. But it's not really that complicated. There's plenty of opportunity for mayhem (and monetizing) telling a villain's origin story. The twist? Just don't watch Cruella expecting a redemption arc....or a story about dogs.

Cruella blends aesthetics together with its rather obvious storyline into a stylish-to-death path of a young genius' (Emma Stone) turn to the dark side. It is a Disney property; so despite its PG-13 rating there's a line this story doesn't cross but it has it's moments. There's excessive signposting via an overloaded soundtrack/score. It's a Camp meets Punk, while The Devil wears Prada with Mannequin sensibilities. Come for the vampy two dimensional villain. Stay for a hyper-stylish, messy, and ridiculously imperfect peek at nature versus nurture.

It's a heist film, a found family story, mentor v mentee pit fight. But mostly its a delightfully garish test of your ability to not rolling your eyes. But overall, Cruella is for the dark and twisty little kid who really wanted to know what's up with the nutty lady obsessed with dalmatians. So come for the fashion and stay for Emma Thompson's brutal foil Baroness von Hellman.

But whatever you do, for goodness sake don't expect the film's deadpan humor, and romp through the 60s and 70s to ever be more than a snarky, sly bit of sleight-of-hand when it comes to the backstory of Cruella De Vil.

Listen as Phenom and Ro discuss Cruella's highs and lows wherein Ro freely admits she's that kid who only watched 101 Dalmatians for its absolutely unhinged villain.

Cruella releases simultaneously in theaters and on Disney+ with Premier Access on Friday, May 28.