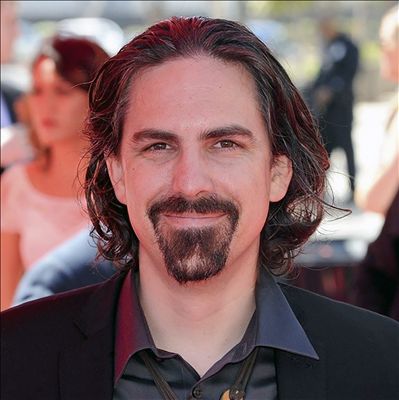 We were fortunate enough to sit down with Bear McCreary AKA “the man who makes you cry during all of your favorite television shows” to discuss how he creates those moments that make you weep or makes your heart soar.

MTR: This season on Outlander what I really enjoyed were the little changes, the little nods, to the locations and I was wondering whose idea was that and what were the thoughts behind making those changes?

Bear: Changing the music when our characters go to Paris, and then changing it again when they go to Scotland was a decision that was made so early and art of a discussion that happened over such a long period of time that I genuinely cannot remember how it started. The showrunner, Ron Moore, and I spent a lot of time talking about this exact issue and even when the first three or four episodes were cut together, we still weren’t sure on how much should change. We knew something needed to change and it was a lot of experimentation. The main title was sort of the canary in the coal mine there. Once we figured out the balance of the main title and incorporating some French elements then we kind of took that into the broader score. I guess the answer is vague because you look at the story, the costumes, the production design, the tone, it’s obvious something has to change, it’s obvious; but do you change everything? Do you make it feel like it’s a wholly different show? Is that a gimmick? It’s still the same characters, following a plot that was introduced last season and they’re going to go back to Scotland … and these were the things we wrestled with and I think when you watch the show what it is is a feeling of being totally new but not distractingly so because it’s actually not totally new. There’s moments when you hear familiar themes and Scottish instrumentation. It feels like we’re in a new environment but if I actually changed every cue in season two, it would feel disingenuous.

MTR: The other moment that you scored that really touched me was The Spy’s Goodbye on Agents of S.H.I.E.L.D. That was a moment that was such a small piece but so powerful. How do you craft something like that?

Bear: That was a unique sequence in Agents of S.H.I.E.L.D. because they really stripped back on sound design and dialogue and let the moment exist in an emotional state and let the music really come to the forefront. This happens frequently on the show but not in such a profoundly emotional way. So to me it was combination of that narrative opportunity. We’re saying goodby to a couple of important characters combined with what I call the musical real estate, the space to be able to say something. It was a very collaborative process. I couldn’t come to the producers and say, “Hey let’s do a big emotional montage here.” By the time I see the episode those decisions have been made. I think that’s really the reason why it was so effective because it was built that way, it was written that way and they knew that they would have me as a resource at the end to create a piece of music that would work in that way and I’m actually very touched that you would even bring it up. S.H.I.E.L.D. is a show with just a lot of stuff happening. Every episode there’s so many twists and turns. And that’s my point. The show moves very swiftly and whenever they take a minute to slow down and let us live in that emotional place even for just a scene it feels even that more special because it’s pretty rare.

MTR: The last question I have is more about process. What’s your process in terms of creating? What do you need in order to go there?

Bear: I come up with my best ideas in the morning. I try to pace myself so that I have days that are what I call “creative days” so I deal with other stuff on other days. I try to also know certain things about myself, like I’ll get up early in the morning and start a new show or a new theme or something that I know is going to take some emotional creative energy. And I just remember to pace myself. If I don’t write it today, it’s ok. It’s better to write it later and then catch up than to hurry and move forward on a project without the correct material and having the pieces in place. It’s doing everything I can to stay in a creative and pure zone as much as I can because to me that’s the one resource that keeps my whole life running. The knowledge that if someone brings me a blank slate like a scene or a movie, that I’ll be able to come up with something that they like and something that the audience likes. I just try to give myself space.

MTR: Is there anything you have coming up that you’re really excited to get started on?

Bear: There’s a couple of things. Some of them I can’t really talk about yet. I’m knee deep in God of War for Sony PlayStation and that is just revelatory; it’s so much fun, I’m really enjoying that. And I’m looking forward to saying goodbye to Black Sails in our final season and there’s a lot of other cool stuff coming up.