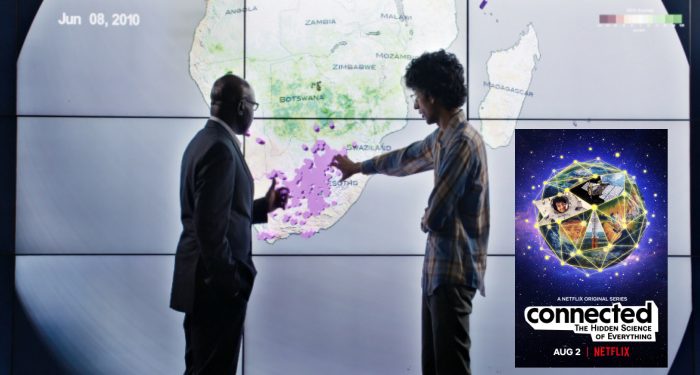 Connected: The Hidden Science of Everything

Science reporter and host Latif Nasser hopscotches around the planet to tease out the surprising ways that we are all inextricably linked to one another and our world.

Science reporter and host Latif Nasser investigates the fascinating and intricate ways that we are connected to each other, the world and the universe at lar...

Full Synopsis:
In Netflix’s new documentary series Connected, science reporter and host Latif Nasser hopscotches around the planet to tease out the subtle and surprising ways that we are all inextricably linked to one another and our world. He discovers how everything from the air we breathe, the selfies we post, and even the poop we poop can be traced back to catastrophic shipwrecks, fraudulent elections, and even distant galaxies. From the microscopic to the telescopic to the kaleidoscopic, this show will make you see the world around you in a whole new way.
We could all use a little since-based world-viewing in our lives about now. Tune to this new documentary starting August 2, 2020 exclusively on Netflix.
____________
Connected is produced by Zero Point Zero Production (ZPZ) and hosted by Latif Nasser. For ZPZ, executive producers are Christopher Collins, Lydia Tenaglia, Erik Osterholm, Latif Nasser and David Mettler.