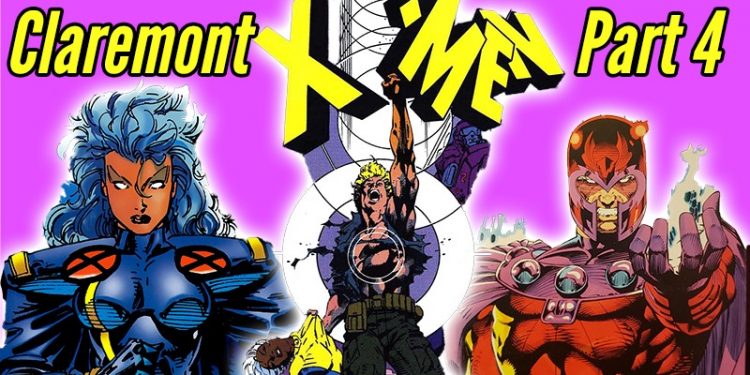 We’re finally here. The end of our Claremont X-Men run here on the Character Corner. We started this almost 6 months ago. To be fair we took a few detours and breaks but we’re wrapping it up now. Honestly, this has been one of our favorite series of episodes and not just because we got to talk about the X-Men. Rereading Claremont’s run and what he was able to do really exposed how much of the traits of the X-Men come from his time on the series. And even though this took us 5 episodes (4 on the X-Men and one on the New Mutants) by the end, we still only scratched the surface. We barely touched Excalibur and we didn’t revisit the Wolverine series that Claremont was also writing at the time. There’s just so much.

For this last run we cover the 19 remaining issues of New Mutants that Claremont wrote before handing off to Louise Simonson (who deserves a lot of credit for what she wrote in New Mutants and X-Factor running parallel to Claremont), the lead up to and through X-tinction Agenda, the Muir Island Saga with the return of the Shadow King and then the first 3 issues of the 1991 X-Men book.

We last left off the New Mutants they had just returned from Asgard and Magneto, fresh off his trial, was now headmaster of Xavier’s school. Now in Part 3 of our series, we touch on some of the later stuff that happens with the New Mutants when Simonson is writing but for these 19 issues, it’s important to note that Claremont focused on the trauma of the students as well as the growth of Magneto. To say the New Mutants up to this point have been put through the ringer is an understatement. While we only covered it briefly, Secret Wars 2 is a traumatizing event for the students because…they die. The Beyonder basically uses them as his play things and so Magneto is left trying to not only earn their trust as their headmaster but cut through the core of their PTSD. Throw in the always scheming Emma Frost and the completely terrible Empath and the job of Erik gets even harder. Claremont’s run on New Mutants can really be summed up as an exploration of young teen mutants trying to navigate a world that hates them while still trying to be kids.

Back on the X-Men side, the X-Men themselves aren’t fairing that much better. While they’ve taken over the old Reaver’s base in Australia and are fresh off of Inferno, things start taking a turn. The Reavers and Lady Deathstroke strike back and crucify Wolverine. Betsy uses the Siege Perilous to escape the trap set by the Reavers which will later have some pretty disastrous consequences. The results are what lead to Betsy being captured by the Hand and having her body switched with that of an Asian woman, Colossus becoming a painter and later being manipulated and controlled by the Shadow King and then Havok becoming a Magistrate for the Genoshians. This is the backdrop leading into X-Tinction Agenda which sees Cameron Hodge teaming up with the Genoshians to get his revenge on the X-Men. While the X-Men are able to beat Hodge, the New Mutant’s Warlock is one of the early casualties.

During this time, we also get introduced to other X-Men that will eventually become mainstays on future X-Teams. A young Chinese American mutant named Jubilee shows up in issue #244. Gambit makes a cameo in Uncanny X-Men Annual #14 and Uncanny X-Men #266.

This is Storm’s Story

One of the things that cannot be understated his how much Claremont’s X-Men run is really about Storm. Ororo is a constant presence in Claremont’s run. Before X-Tinction Agenda, Storm is thought to be dead but is really stripped of her memory and put in a young girl’s body. This is where she meets up with Gambit while being pursued by the Shadow King. While she gains her memories back, for a while she’s still left in that young girl’s body with limited control of her powers. Yet she’s still leader of the X-Men. Claremont makes it abundantly clear how important she is. And it stays that way as Claremont wraps up his time writing the X-Men. The Muir Island Saga wraps up something that Claremont started back in issue #117 with Charles Xavier and the Shadow King. By the end of that arc, all the X-Men come home and are back at the mansion with Charles Xavier. But instead of relegating Storm to the background, we get the formation of the infamous Blue and Gold teams. Storm takes the lead of the Gold team with herself, Jean, Iceman and Colossus (with Bishop joining soon after). The Blue team is lead by Cyclops with Wolverine, Gambit, Psylocke, Rogue and Beast. Uncanny X-Men follows the Gold team while the newly created X-Men series follows the Blue team. X-Factor becomes the team we most recognize them as with Val Cooper reforming the team with Polaris, Havok, Quicksilver Strong Guy, Wolfsbane and Multiple Man.

The X-Men Gold team's solo book would go on to sell 8 million copies becoming the best selling single-issue comic of all time. After issue 3 of X-Men, Claremont is officially done with his run. While it is clear he still had plenty of story to tell, it’s amazing how much he put the X-Men through and then when he was done, he put everything back where it was. The original X-Men leave X-Factor and come back to the X-Men, Charles Xavier is back in the mansion and back in a wheelchair. Yet while the major pieces were back, there were clearly a lot of changes that happened and stuck. And we’re grateful for it.

Give the episode a listen and let us know what you think. This was the last numbered Character Corner for 2019. We may have some Character Corner shorts that come out and there will definitely be one more Pull List coming in December so stay tuned. When we return, we will be taking a trip over to DC to talk about the emerald archer himself, Oliver Queen.