Christmas Day Premiere For King’s One Night In Miami… 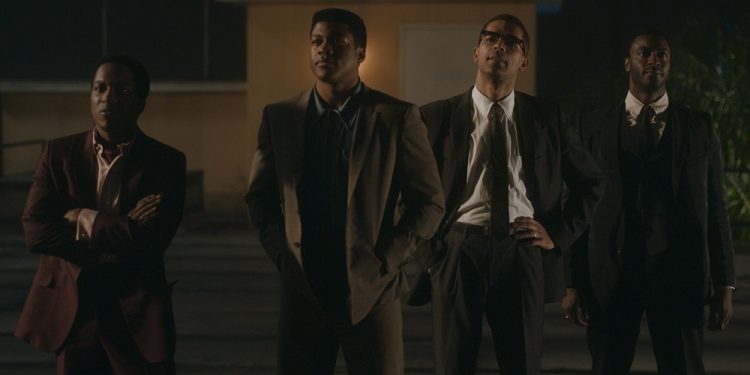 The critically-acclaimed feature film will open in select theaters on December 25, 2020, followed by a global launch on January 15, 2021 exclusively on Prime Video.

Much More than Hype

This contender starring Kingsley Ben-Adir, Eli Goree, Aldis Hodge and Leslie Odom Jr. deserves its praise. This ensemble turned in high caliber performances ensuring King's feature directorial debut knocked it out of the park. One Night in Miami..., is intimate, intense, and does so much more than simply put four legends in a room together.

In the press release King shared, "To complete and release a film within the same year is a difficult task. We welcomed the challenge because we knew now was the time for this film to be released. Amazon fully supported our intention and I could not be more excited this prescient story will be seen across the globe."

One Night in Miami...'s Premise

The press release description of this fictionalized encounter between legends only skims the surface of the experience:

Set on the night of February 25, 1964, the story follows a young Cassius Clay (before he became Muhammad Ali) as he emerges from the Miami Beach Convention Center the new World Heavyweight Boxing Champion.

Against all odds, he defeated Sonny Liston and shocked the sports world. While crowds of people swarm Miami Beach to celebrate the match, Clay - unable to stay on the island because of Jim Crow-era segregation laws - instead spends the night at the Hampton House Motel in one of Miami's historically black neighborhoods celebrating with three of his closest friends: activist Malcolm X, singer Sam Cooke and football star Jim Brown. The next morning, the four men emerge determined to define a new world for themselves and their people.

The press release goes on to say:

In One Night in Miami…, Powers explores what happened during these pivotal hours through the dynamic relationship between the four men and the way their friendship, paired with their shared struggles, fueled their path to becoming the civil rights icons they are today.

Be ready to Buy the Soundtrack

Listen to the MTR Critics Discuss

One Night in Miami... is definitely an MTR favorite this 2020 festival season. After catching it during TIFF, both Ro and Kriss came away convinced that there's absolutely nothing Regina King can't do.

One Night in Miami will open in Select Theaters on December 25, 2020 and launch exclusively on Amazon Prime Video on January 15, 2021