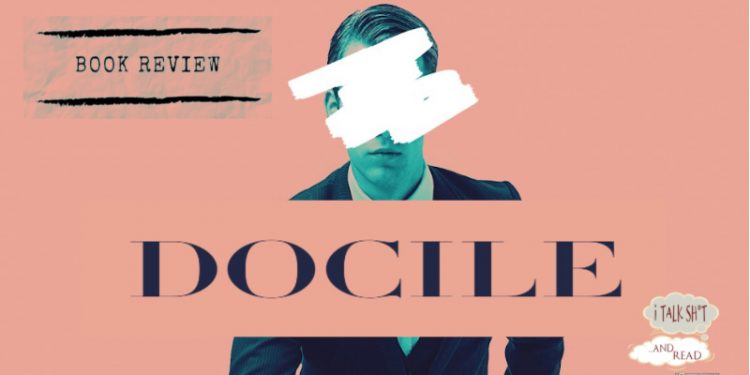 In debut author K.M Szpara’s Docile, agency is for sale in a Baltimore - not nearly as far in the future as one would like – where debt never dies. With poor citizens caught up in Maryland’s unforgiving system due to ‘Next of Kin’ debt inheritance laws, feeding an unending supply of debtors into either prison or indentured servitude, choice is truly a luxury of the ultra-rich. Szpara’s created a science fiction allegory with a shifting point of view that’s a deliberate gut-punch.

Twenty-one-year-old Elisha trades his freedom by signing up to be a debt slave, a Docile, to save his family from prison. Being a Docile, means submitting to a Patron’s every whim, including sex. There’s even a drug, Dociline, available to guarantee capitulation while suppressing a Docile’s memories of what happens to them. Elisha watched Dociline destroy his mother; so, he plans to serve without taking it.

Alex, CEO of Bishop Laboratories the producer of Dociline, is out to build the perfect companion and prove to his father and Board of Directors that he’s in control; whatever the cost. Securing Elisha as his Docile for a life-term, in exchange for wiping out all his debt, presents Alex the perfect opportunity to ensure his own future. In Alex's hands, Elisha soon learns there are far more insidious ways to lose one's self once you've signed away the right to say no.

There aren't many sci-fi stories centering fully realized queer characters. But Szpara builds a sexual relationship with believable elements of domination and submission (both good and bad) and bondage play, that’s also about intimacy and companionship outside the bedroom between two male-presenting characters. It doesn’t, thankfully, ever attempt to cast the origins of their relationship in positive light.

Docile keeps readers immersed with crisp dialogue, compelling and evocative descriptions of life lived in a frighteningly believable near-future setting that spills its characters’ fears onto the page. It’s provocative and provoking in equal measure imparting painful lessons through relatable characters in complicated relationships that run the emotional gambit. The plot also features multiple characters in non-traditional relationships with depth and flavor to them. But does a less thorough job of integrating how choice (or a lack thereof) plays into the characters' lives who benefit from the system. From the start Szpara address the inequity between various people and the toxicity this permits to seep in. The details, however, occasionally fail to make it clear that what’s happening in a given situation is wrong. It feels purposeful, but is still disquieting.

While there are missteps in creating connections between moments and people; there are no gimmicks. The sex isn’t salacious, the kink beginner-level but still deliciously written, and the emotions conflicted as hell. The darker elements revolving around Elisha’s lack of agency and what that means in his personal and intimate relationships are presented carefully and  addressed with nuance and truthfulness. Knowing the internal thoughts and struggles of the two main characters makes it clear Szpara isn’t trying to soft peddle the lack of consent at the core of most sexual encounters. Unfortunately more than a few opportunities to properly contextualize - and differentiate submissive behavior - from being forcibly conditioned to another person’s will go by un-utilized. The elements are there but far too simplistically presented.

As Elisha and Alex come together lines get crossed and each slowly become unrecognizable to themselves and those closes to them. Elisha attempts to suppress his anger, shame, and conflicted enjoyment until constant conditioning strips away his individuality. Alex’s subjugation of Elisha reaches a tipping point and he’s forced to admit how emotionally involved he’s become with his Docile. Confronted with the damage he’s done; Alex makes a decision that threatens to topple the entire Docile system. What comes after is a heartbreaking and painful journey to survive the fall out for each of them and those closest to them.

Docile is less a redemption story than it is a recognition story. There are unsympathetic characters galore. People willingly exploit others for their own ends and damn the consequences. Because of that the plot feels realistic and as a result, convincing. Had the story more fully addressed the various forms of exploitation  and negative conditioning in play, it would strengthened both the main allegory and better addressed the psychological byplay between the various factions. Regardless, Docile is a damn good book.

Szpara’s care in nestling themes like drug side effects, willful blindness, psychological warfare, loyalty, free-will, equality, partnership, consent, and friendship in a dynamic story that tackles economic slavery and the systems that perpetuate it, makes them resonate that much more as the plot unfolds and this unbalanced relationship (and this world) evolves.

Docile doesn’t try to be all things to all people. This isn’t where you’ll find a thoughtful commentary on race-based slavery, but the juxtaposition's apparent. The setting is a seemingly alternate-history Baltimore.

Let's be real, society patently refuses to confront unconscious bias surrounding the wealth gap, privilege, and class when race must also be taken into account. Docile removes that avoidance barrier without coming off as too disingenuous. Upside, this story doesn’t build its narrative on the pain of BIPOC. Downside, Docile is missing a level of grit and nuance it needs to be the true indictment of the driving force of US-capitalism it could’ve been.

Shortcomings aside, there’s passion, bitterness, betrayal, and a touch of intrigue to keep readers turning the pages. Building a world around a tagline like, there is no consent under capitalism is a tall order. It’s a challenge that Szpara's almost meets in this quick-paced parable that never forgets that neither freedom nor love is ever simple…or unconditional.