Bombshell Has the Right Message But Wrong Messengers 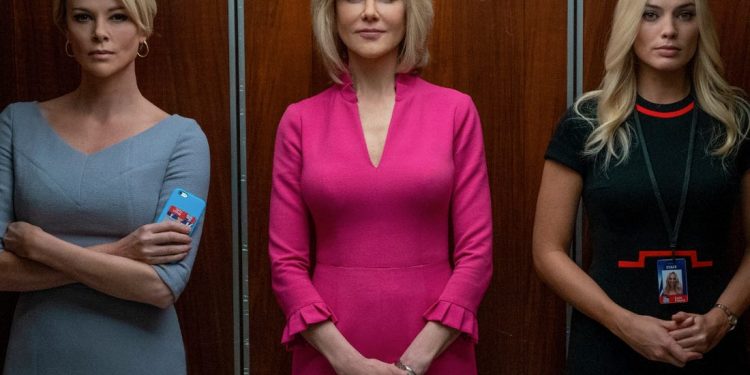 Charlize Theron and Nicole Kidman put in very solid performances as Kelly and Carlson respectively. Theron does a great job of transforming not only her look but the personality of Kelly as well. The problem with Bombshell isn’t with the performances or portrayals but with the subjects themselves. Anyone who knows Megyn Kelly or Gretchen Carlson knows they’re two incredibly racist individuals who if not for being victims of Ailes himself, would have gladly taken his side and steamrolled any woman who came out against him. The problem is, in this story they’re also victims (rightfully so). The film however feels too safe in that it wants to protect the image of Kelly and Carlson. There’s nuance in this story that just isn’t there. Yes, Kelly and Carlson are victims, but they also fed into a culture at Fox News that protected abusers. On the surface some would say that’s victim blaming. It’s not. It’s pointing out the nuance of the situation in which two bigoted women that until they were the victims, had no problem attacking and shaming victims while giving cover for abusers. Ironically, the same types of attacks that Kelly and Carlson would use on other victims, they did themselves. Carlson only turning on Ailes when she was no longer getting the prestige positions she wanted and Kelly waiting until every other abused woman put themselves on the line before finally coming and speaking out. Again, both are victims. Both are also terrible people.

There are two things that could have saved Bombshell. One would have been to take the approach of Adam McKay’s Vice and focus more on how terrible and enabling the entire culture and staff of Fox News was. Jay Roach had more of a challenge than McKay as terrible as they are, Carlson and Kelly are still victims. But that’s also why the second thing that Bombshell should have done (that also comes from Vice) is use a third person to tell this story. What’s sad is that there actually was a character that could have filled this role and that’s Margot Robbie’s Kayla Posipisil who is a fictional character added into this film. Had the film focused on Posipisil’s perspective instead of telling it from Kelly’s point of view, I think this film could have had more of an impact. It would have allowed the view point to stay from the perspective of a female victim while also allowing valid critiques of Carlson and Kelly who are also just as much a part of the victim blaming, bigoted culture at Fox News. Perhaps what was really need here was a third thing which is a female director and writers. While technically a sound film, Bombshell obviously needed a more nuanced approach that I feel could only have come from a woman’s perspective.

You can listen to our full discussion about this movie on our Premium feed. Sign up below if you’re not a member already.