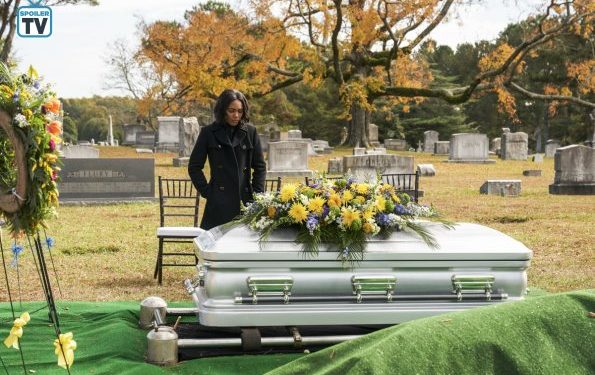 We're winding down folks and unless something changes soon, Black Lightning might have to go the way of Gotham. Unfortunately, "The Book of Secrets" isn't officially done (chapter 4 doesn't drop until March 4th) so we can't definitively say this chapter was better than The Book of Rebellion but watching the show by book was a slight improvement.

Tobias disappointed with the reveal of his master plan. While it seemed like he was gearing up for a massive takeover of Freeland, his goals are pretty small potatoes. Tobias plans to rent out the pod kids and a group of special pods from Markovia to the highest bidder. He's gone from dealing drugs to dealing metahumans. We had higher hopes for him too.

Anissa is focused on Grace who can't control her powers. Grace leaves town so Anissa uses the resources of the Black Cave to dig into Grace's past. Turns out she was trafficked and forced into prostitution as a child and Grace Choi is the identity she created for herself once she escaped. This is a great potential storyline (especially if Tobias captures Grace and tries to force her into his Rent-A-Meta program) but we're not sure if the writers will capitalize on this or drop the ball again.

Lynn and Jefferson are finally getting it together in their personal lives but their professional lives are a mess. Jefferson has the opportunity to get his school back from Massa Lowry but lets him stay in charge because Jefferson doesn't feel that he can fully give his attention to the school. This would be noble if Jefferson and everyone else would stop blaming him for not being around ONCE! One whole time he was being Black Lightning instead of Jefferson Pierce and he almost died and everyone is acting like he's been a consistently negligent principal.

Lynn refuses to work with Dr. Jace who has been brought back into the fold since the Markovians want to abduct her and Lynn to work on their secret metahuman project. Because Lynn refuses to be in the same room as Jace, she doesn't realize that Jace is secretly working with Tobias and when Tobias comes to take the pod kids, Jace escapes as well. Currently, Jace is needed because she knows about the pods and she was the scientist who started the Markovian project. Only one of the Markovian pods has been opened and it contains one of the Masters of Disaster, Shakedown (Hosea Chanchez). This partnership is ripe for disaster (no pun intended) since Shakedown is holding a grudge against Jace and Tobias will get rid of anyone who becomes expendable (R.I.P. Todd, we hardly knew ye)

Finally, Jenn is holding down the only truly compelling storyline on the show. Despite Reverend Holt's prayers (R.I.P. Rev), having his spine pulled out is the final nail in Khalil's coffin. He dies after a lovely scene where Jenn goes into his mind and gives them one last dance at prom. But now that Khalil is dead, Jenn is filled with a lot of rage. Combined with the fact that she may be more powerful than a nuclear bomb, Perenna tells Jenn she has to get this under control before she literally explodes. Right now, Jenn's struggle to control her powers and her quest for vengeance is the best reason to watch Black Lightning. China's acting is great and for a superhuman teen, Jenn as a character is pretty relatable.

We'll see what happens in March as we close out The Book of Secrets but right now, Black Lightning isn't the show we fell in love with even with its moments of fun. Check out the full podcast and let us know how you feel.